Just as Joan Fígols’ seven-year journey to fatherhood was about to end, a pandemic struck.

The Spanish dairy farmer, who lives in Barcelona with his husband Alex Fernández, was anxiously awaiting the birth of their son Lluc in March when suddenly the U.S. border closed to European flights, in hopes of curbing the spread of COVID-19. Since Spain was one of the countries hardest hit at the time, the two were stuck an ocean away with only weeks to go until their surrogate, based in Boise, Idaho, was due to deliver.

In this week’s issue of PEOPLE, Fígols, 40, and Fernández, 38, recall their frantic next steps, starting with the moment they realized they’d have to fight for entrance into the country in order to be with their son.

“Our battle with the embassies started the moment the U.S. border was closed to European flights,” says Fernández, recalling their desperate efforts as they scrambled to collect the necessary documents. “We sent hundreds of emails asking for permission to travel, but we were always denied because Lluc hadn’t been born yet.”

RELATED: 4 Surrogates Share Why They Carried Babies for Other Families — and Whether They’d Do It Again

Lluc finally arrived on April 24 weighing 6.8 lbs. — and the excited dads couldn’t be there to take care of him.

In came Nicole Williamson, whose Boise-based surrogacy agency A Host of Possibilities made Lluc’s birth possible. With no other options, the 40-year-old mom of two stepped in to care for little Lluc while Fígols and Fernández continued applying for permission to travel.

Williamson kept them as updated as she could on their baby boy through daily video calls and constant updates on everything from his doctors visits to how he was sleeping and eating.

“Nicole and her family have been like guardian angels for us,” says Fernández.

“You just do what you need to do to make sure people are taken care of,” says Williamson, who’s been a surrogate four times herself (PEOPLE followed her story in our Nov. 4, 2019, issue) and recently cared for two other babies because of the pandemic.

For more on Fígols’, pick up the latest issue of PEOPLE, on newsstands now, or subscribe here.

Never miss a story — sign up for PEOPLE’s free weekly newsletter to get the biggest news of the week delivered to your inbox every Friday.

Finally, the request was approved — but just for Fígols. Fernández was forced to stay behind, with no explanation, while his husband set off for Idaho to get their newborn. He flew into Idaho and waited five days for the results of his negative COVID-19 test when Williamson finally brought Lluc over to meet his dad, six weeks after he was born.

“It had been such a long road to get here and then to finally have him in my arms,” says Fígols, who video chatted with Fernàndez when Lluc arrived. “It was an emotional reunion.”

“There were so many things that happened in Lluc’s first six weeks that they didn’t get to experience,” admits Williamson. “But seeing Joan hold him for the first time really was amazing.”

Fígols stuck around for a few days, navigating being a new dad while connecting with Fernández through video chats and anxious to get the final document they needed for Lluc to fly back home. They finally made it back on June 16.

“It felt like such a relief when they finally got here,” says Fernández, who drove the six hours to the Madrid airport to pick them up. “Until he was here, it felt like our problems weren’t over yet.”

Now safe at home in Spain, Lluc is already sleeping through the night and being showered with attention during the day from his extended family — including his nine cousins and 12 aunts and uncles.

“We got a good little boy,” says Fernández, who adds that they’re both eager to provide Lluc with a sibling in the not-so-distant future. “In a year we’ll have another one.”

Adds Fígols: “And anyone asks—of course, we’d do it all over again.”

Williamson’s story and the world of surrogacy are explored in the documentary Made in Boise, all about the agency that’s helping make dreams come true for hundreds of parents. Directed by Beth Aala, the documentary is available now on Amazon Prime Video and GooglePlay.

How can I get a refund on my cancelled holiday, flight or cruise?

Tue Jul 7 , 2020
A man walks past a signboard displaying cancelled flights at an arrivals floor of the international terminal at Haneda airport in Tokyo: AFP via Getty Images During months of lockdown, tens of thousands of travellers will have had their holidays cancelled. Many will have found claiming a refund an uphill […] 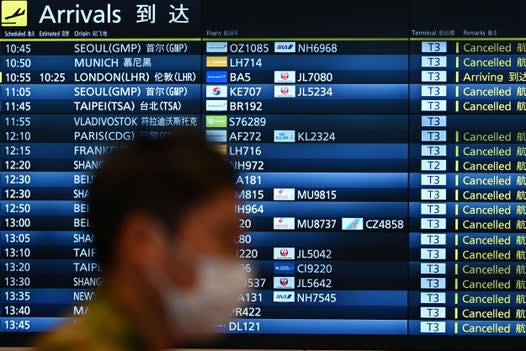