In an election year packed with political ads, some TV bits will be hits, while others will miss their mark badly. And during the U.S. Senate race between incumbent Senator Cory Gardner and former Governor John Hickenlooper, there have been for fewer hits than misses.

Case in point: the National Republican Senatorial Committee’s ad this summer using the deadly gas explosion in Firestone to blithely connect that tragedy to Hickenlooper’s tenure as governor. Gardner, who was the NSRC chair in the 2018 election cycle, finally called for an end to the ad’s run after criticism reached the media, though he added that he had no way to stop it.

There haven’t been many missteps that bad recently, but viewers have still been subjected to cringe-worthy moments. Some come from commercials paid for by the actual campaigns, and others are courtesy the dark money that Senator Sheldon Whitehouse so effectively explained at this week’s Supreme Court justice hearings…also known as the 2020 prequel to The Handmaid’s Tale.

Here are ten of the hits and misses:

John Hickenlooper: Was This Ad Made in 2019?

This pro-Hick ad is actually pretty effective, with Governor Jared Polis standing up for his Democratic colleague and calling out the (many) attacks against Hickenlooper as the ridiculousness that they are. It’s sincere and kind and statesmanlike, which are three things for which the Trump/McConnell era of American politics will never be known. So it’s refreshing in that sense…but that last shot with Polis and Hick smiling, arms crossed, shoulder-to-shoulder? What the hell, fellas? Where are your masks? Where’s the six-foot distance? I mean, sure, you’re outside, but that doesn’t excuse the fact that this is 2020, and you’re running against Trumpism and hypocritical leadership. Sigh.

There are a lot of attacks in this ad approved by Hick — and most of them are true. Gardner’s record on COVID-19 response is right in line with Trump’s — which is to say feckless, at best. Criticizing Cory for complaining about governmental non-response to the financial emergency that the pandemic has created in so many American households and then doing nothing about it? Totally valid. But don’t make up some crap about him being on vacation too much. That’s true about Trump, sure, but unsubstantiated in Cory’s case. And it’s not smart to come across as an opponent of fishing, Hick. The piscatory lobby is full of some real movers and shakers.

It’s one thing for a candidate to try to act like he’s one of the family. It’s another to remind you of your great-aunt with the cough drops in her purse. I don’t even know what Hick is talking about here, because all I can think about is lipstick. Lipstick. LIPSTICK.

John Hickenlooper is known to be sort of an awkward guy, kind of a klutz. That’s just his brand of aw-shucks politics. And it’s on full display in this ad, as he jerks around a debate set so frenetically that the camerawork can’t even keep up. But Hick shrewdly plays off the “Cardboard Cory” grassroots movement that became a documentary without really coming out and mentioning it. Instead, he uses his own figures of the Republican candidate — and it’s not a flattering pose for Cory, who looks a little lifeless and slack-jawed, like a GOP sex doll that no one wants — to point out that Gardner is on record as saying one thing and doing another. Which is pretty much the entire Republican platform in 2020.

The Lincoln Project has gotten a lot of time in the spotlight this election season, since it’s a rare sort of phenomenon: a group of disgruntled former GOP stalwarts disgusted with the direction that Trump has taken their (in some cases, former) party. Their commercials have gained a lot of traction because they’re good, especially in recent months. But early in 2020, one of their first forays into senatorial politics was to put up this ad against Cory Gardner. John Hickenlooper hadn’t even won the primary yet, which is why it ends with the threat that if Cory Gardner can’t do his job — namely representing the state, and not the care and feeding of Trump’s ego — “Colorado will find someone who will.” All well and good, Lincoln Project, but maybe avoid calling the guy “small” and “impotent” at the same time? Honestly, the last thing America needs at this point is more dick references in its political discourse.

As proof that our national conversation needs more substance and less phallic undertones, consider how many times Cory says “enormous” in this ad. It seems like more than it actually is, but his attempt at parallelism doesn’t work, and it just comes across as sad overcompensation. Separating himself from Trump’s reputation has been the big orange monkey on Cory’s back for the whole election, and this ad was created in lieu of his actual attendance at the Colorado Republican State Assembly, because as has been true throughout his tenure as Colorado senator, Cory isn’t great about showing up. It ends with Gardner’s beaming exclamation that “when it comes to America, you ain’t seen nothin’ yet.” Which is exactly what worries most Americans. It’s a real concern. And it is enormous.

I’m sure Cory Gardner’s family is delightful. Really, I am. And I’m sure they’ve been camping, just like I’m sure Cory was there some of the time. Most of us have camped, even those of us who also consider the high point of such trips the way the skin peels off the roof of your mouth after you try to eat the burned marshmallow that was on fire just seconds before. But there’s an aggressively paternal American falseness to this ad, from the first kid joining in the parade of Republican COVID denial (“Now it’s time to get outside!”) to the last kid’s scripted non-joke asking, “Are we there yet?” It’s enough to make you want to don an Eddie Bauer down vest and punch an elk. Worst of all is the bad editing at the end, where Gardner laughs too hard, the camera doesn’t cut away and he doesn’t know what else to do, so he sits there in a terrifyingly full second of joyless smiling: existential horror, family style.

What was the idea behind this ad? Cory Gardner: worst therapist ever? Cory Gardner: oblivious to HIPAA regulations regarding patient privacy? Cory Gardner: surrounded by used tissues? It’s like they had the beginnings of an idea on how to use Hickenlooper’s ill-advised statements on a senatorial run back when he was in the Democratic primary for president, but stopped at the stroke of brilliance that is the ridicule of the therapeutic healing process for political gain.

Cory Gardner Can Shower, Too

Early in his political career, Hickenlooper pledged not to run negative ads. He abandoned that strategy this election cycle, and while you might take issue with that turnabout, it’s all sorts of weird that someone slinging as much mud as Cory Gardner would have something to say about it. Now that we’ve seen both Hick and Cory in the shower, can we call a moratorium on wet politicos bathing for laughs (or the lack thereof)? At least Andrew Romanoff had the good sense to stay out of the tub when he ran a super-similar ad back during the primaries that Gardner’s people seem to have liked so much that they stole it. You know, so they could make a point about how honest Gardner is.

If you’ve been watching TV at all in recent weeks, you’ve probably endured this quintessentially slimy attack ad against Hickenlooper, produced and paid for by the dark money of the Senate Leadership Fund, which is run by Mitch McConnell’s former chief of staff. The group has this as its mission statement: “to protect and expand the Republican Senate Majority when Elizabeth Warren, Bernie Sanders and Chuck Schumer, together with their army of left-wing activists, try to take it back in 2020.” It’s notable not so much for its unsurprising singular goal, but for just how overt bad politics has become in our era. SuperPACs no longer hide behind carefully crafted language to suggest somehow that they’re for something. They’re just about victory and power, and if you don’t like it, go cry to the Judiciary branch we stuffed full of unqualified and absolutely biased Trumpsters.

So the attacks on Hickenlooper in this ad aren’t the most remarkable part. What’s notable here is the hypocrisy involved: The creators have learned well from Donald Trump to accuse the opposite side of the exact crimes of which you’re guilty. So it’s not Gardner (who goes unnamed in the ad) who has connections to oil and gas. It’s not Gardner guilty of changing the rules in D.C. “to help big-dollar backers.” Seriously, fellas, it’s probably not a great idea to bring up the whole “changing the rules in D.C.” thing while you’re in the middle of doing exactly that regarding Supreme Court nominees. Honesty: When you’re a dark-money SuperPAC, it’s the most awkward thing of all.

Teague Bohlen is a writer, novelist and professor at the University of Colorado Denver. His first novel, The Pull of the Earth, won the Colorado Book Award for Literary Fiction in 2007; his textbook The Snarktastic Guide to College Success came out in 2014. His new collection of flash fiction, Flatland, is available now.

'Big Pile' Of Live Eels Dumped In Lake In NYC Park; Impact Not Yet Known

Sat Oct 17 , 2020
NEW YORK (AP) — Andrew Orkin was taking a break from his evening jog to sit by Prospect Park Lake when he turned around and was startled to see a tangle of wriggling snakes. “And quite a big pile — fully alive,” said Orkin, a music composer who lives near […] 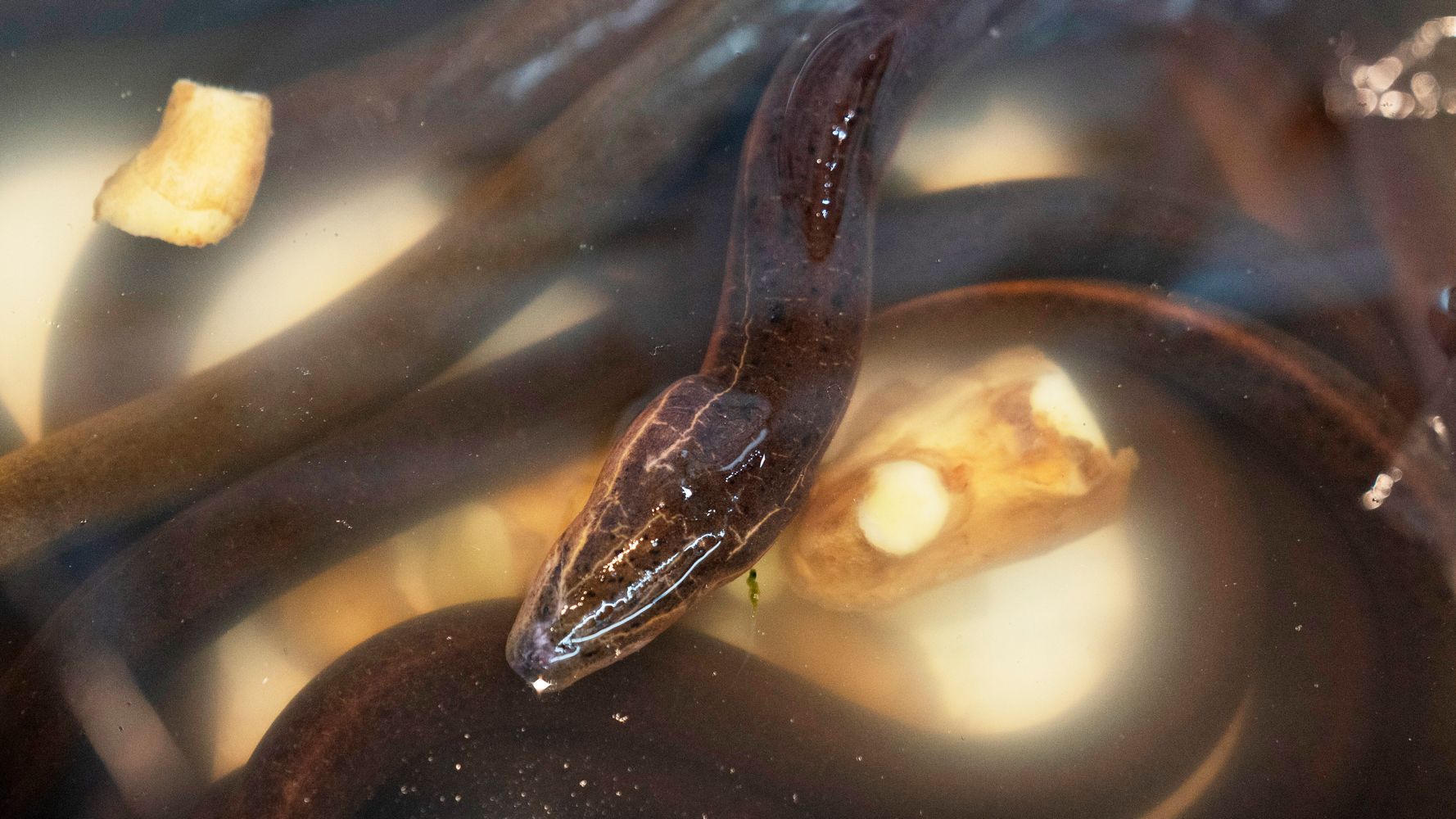