Ginger Floerchinger-Franks typically invites 10 people to her home in Boise, Idaho, for Thanksgiving dinner and cooks the entire meal herself, including her specialty: pumpkin soup.

But the pandemic has forced her to devise a new plan: a socially distant potluck. Three households will each prepare a dish, and Floerchinger-Franks will shuttle the platters between their homes. Then they will gather on Zoom to savor each other’s food.

Sign up for The Morning newsletter from the New York Times

The coronavirus pandemic has intensified across the country just as Americans are preparing to sit down to eat turkey and stuffing and to make their opinions airborne with parents, siblings, cousins, children and perhaps a friend with nowhere else to go. But now public health officials are warning against the very rituals that many families take for granted: out-of-state travel and large, indoor gatherings.

The virus, and the precautions, have upended Thanksgiving in unprecedented ways. Families are scrambling to devise holiday plans that won’t endanger their health. Many are lining up at testing sites, hoping to get a negative result in time for Thursday’s meal. Some are forgoing Thanksgiving altogether.

But not everyone is quite as fastidious as Floerchinger-Franks, who happens to be a retired public health official. Frustrated after months of isolation, many are ignoring the pleas of public health experts and forging ahead.

“We’re just going to eat the way that we normally would,” said Tamra Schalock of Redmond, Oregon, who is hosting a party of 13. “We believe that family is important, and we believe that people who don’t have family need a place to go.”

Count Thanksgiving as the latest victim of 2020, another tradition that once unified the country and has been reduced to a stressful dividing line. Instead of arguments over politics or the Dallas Cowboys’ running game, the argument is over whether to get together at all.

Tyler Cohen, 52, of San Francisco, knows the debate well — and is exhausted by it. Cohen’s 80-year-old father, who has diabetes and survived cancer, plans to celebrate in New Jersey with his wife’s extended family, despite all efforts to convince him otherwise.

“I hate it, and I hate all of the fights,” Cohen said. “I appreciate that this may be his last years on earth, and he doesn’t want to spend it hiding inside.”

For those trying to follow the rules, Thursday’s holiday meal will be improvised in myriad ways: large turkeys replaced by small chickens to accommodate more modest crowds. First-time chefs apprehensively filling in for absent family members. Dining shifted outdoors — or inside with windows open. Promises to try again next year.

In Menlo Park, California, Nette Worthey generally hosts several dozen guests but will celebrate this year with only her own family of three. She’s planning a less “turkey-centric” meal.

In Camarillo, California, Richard Aronson is considering an online party.

“We’ll all listen to ‘Alice’s Restaurant.’ We’ll walk our laptops around the house to show off our Thanksgiving decorations,” he said.

Rebecca Hing, who lives in New York City, would normally be traveling to Arizona, where most of her family lives. There, her mother would make Chilean sea bass, adding ginger, soy and wine, and various other dishes.

“She would make these insane Chinese banquetlike meals for 25 of us,” Hing said.

This year, Hing, 49, will be in her own kitchen, re-creating some of the dishes while her mother walks her through the steps on the phone.

“I’m trying to do as many things that sort of remind me of being home,” she said.

One military family in San Antonio rarely does the same thing twice anyway and had some sensible advice for the rest of the country.

“Overall, we really just adjust to where we are,” said Kate Mansell, whose husband serves in the Army.

Typically, Mansell said, they try to volunteer. This year they will stay home and order a traditional meal from a local restaurant. Mansell is looking forward to showing her 2-year-old son, William, the Macy’s Thanksgiving Day Parade — which itself will be an improvised, TV-only affair.

The anxiety over Thanksgiving comes as the country continues breaking coronavirus records, with more than 198,500 cases announced in a single day Friday and more than 82,000 people hospitalized. That same day, the country soared past 12 million total cases. Deaths have also spiraled upward, rising 62% in the past two weeks.

On Thursday the Centers for Disease Control and Prevention released new Thanksgiving guidance, pleading with Americans to stay home.

“The safest way to celebrate Thanksgiving this year is at home with members of your household,” said Erin Sauber-Schatz, who leads the agency’s community intervention and critical population task force.

The recommendation wasn’t all that different from advice the agency had been giving for months about being careful with one’s contacts. And there are already indications that more families intend to stay home. On Friday, the number of people who passed through Transportation Security Administration checkpoints was down 60% from the same weekday last year, according to the TSA. Still, more than 1 million people traveled through U.S. airports Friday — making it the second-busiest day of air travel since March 16, when the pandemic was beginning.

AAA estimates that road travel will fall 4.3% this Thanksgiving.

But coming just days before holiday travel would begin in earnest, the CDC statement not only drew the ire of conservative commentators (“tyrannical government overreach,” wrote Christine Favocci in The Western Journal) but also touched a nerve for many who consider the Thanksgiving gathering as sacrosanct as any religious worship.

Sarah Caudillo Tolento, for one, will attend a celebration with 10 to 15 people at her mother’s house in Salem, Oregon.

Caudillo Tolento, 32, said the recent death of her grandmother — whose last few months were defined by isolation — pushed her to embrace the opportunity to gather as family.

“I’m not scared,” she said. “There’s not anyone that’s going to keep me away from being around my family.”

Anthony Peranio, 39, of Floral Park, New York, plans to celebrate at his mother’s house “as always,” with 15 to 20 people.

“It’s beyond ridiculous what’s being asked of us as a society,” he said.

Other families, eager for reunions after months of separation, have made a compromise: COVID-19 tests as a sort of holiday safety net.

Negative test results do not guarantee that holiday dinners will be virus-free — only that “you probably were not infected at the time your sample was collected,” according to the CDC. Still, some families have made COVID-19 tests the price of admission to Thanksgiving this year.

Romeo Garcia III, who waited in a long line for a test in Washington, D.C., on Thursday, will drive to see his family in Greenville, North Carolina, and expects about a dozen people at the gathering, which will include a family prayer before dinner and football on television.

“I was a little upset that it has come to the point where we do have to take a test to go and see family,” he said, “but I guess it’s what we have to do.”

For many awaiting tests, the Thanksgiving choice was anguishing: risk getting sick or remain separated from family they had not seen for nearly a year. Patricia Adelstein and her husband plan to travel from Washington to the Berkshires to see their 30-year-old daughter.

The couple are concerned about the virus, Adelstein, 64, said, but ultimately decided that the trip was worth the danger. She and her husband will try to keep their distance from their daughter, although she’s not sure how well that will work.

“She said she wants to hug her mom,” Adelstein said. “We’ll risk it. We need each other.”

A New Jersey couple on their own this year found a way to feel close to family from afar. Qraig de Groot plans to introduce his boyfriend, Jamey Welch, to his beloved tradition of a trip to KFC.

De Groot’s family first turned to Colonel Sanders for their holiday meal decades ago when his mother was a nurse and his father worked at an electric company that required him to work on Thanksgiving.

His mother loved it dearly. Some 30 years after their original KFC Thanksgiving, de Groot recreated the meal in 2015 for his mother, Barbara, who had moved into a retirement community and could not travel for the holiday.

The chicken was warmed in the oven as mashed potatoes and gravy bubbled on the stovetop. The coleslaw was placed in a decorative bowl while biscuits were reheated in the same electric broiler from the original event. It would be de Groot’s last Thanksgiving with his mother, who died the following year.

“But I believe 2020 is the perfect year for him to experience one of my most cherished childhood memories — reheated mashed potatoes, gravy, fried chicken and all,” he said.

Become an expert craftsperson with these luxury workshops, from floristry to mosaic making

Mon Nov 23 , 2020
The School of Icing by Biscuiteers All this extra time spent indoors right before the festive season may be something of a blessing in disguise. Christmas is nigh, but suddenly there’s plenty of time to plan for the season of gifting. While high-end purchases are always received well, it’s not […] 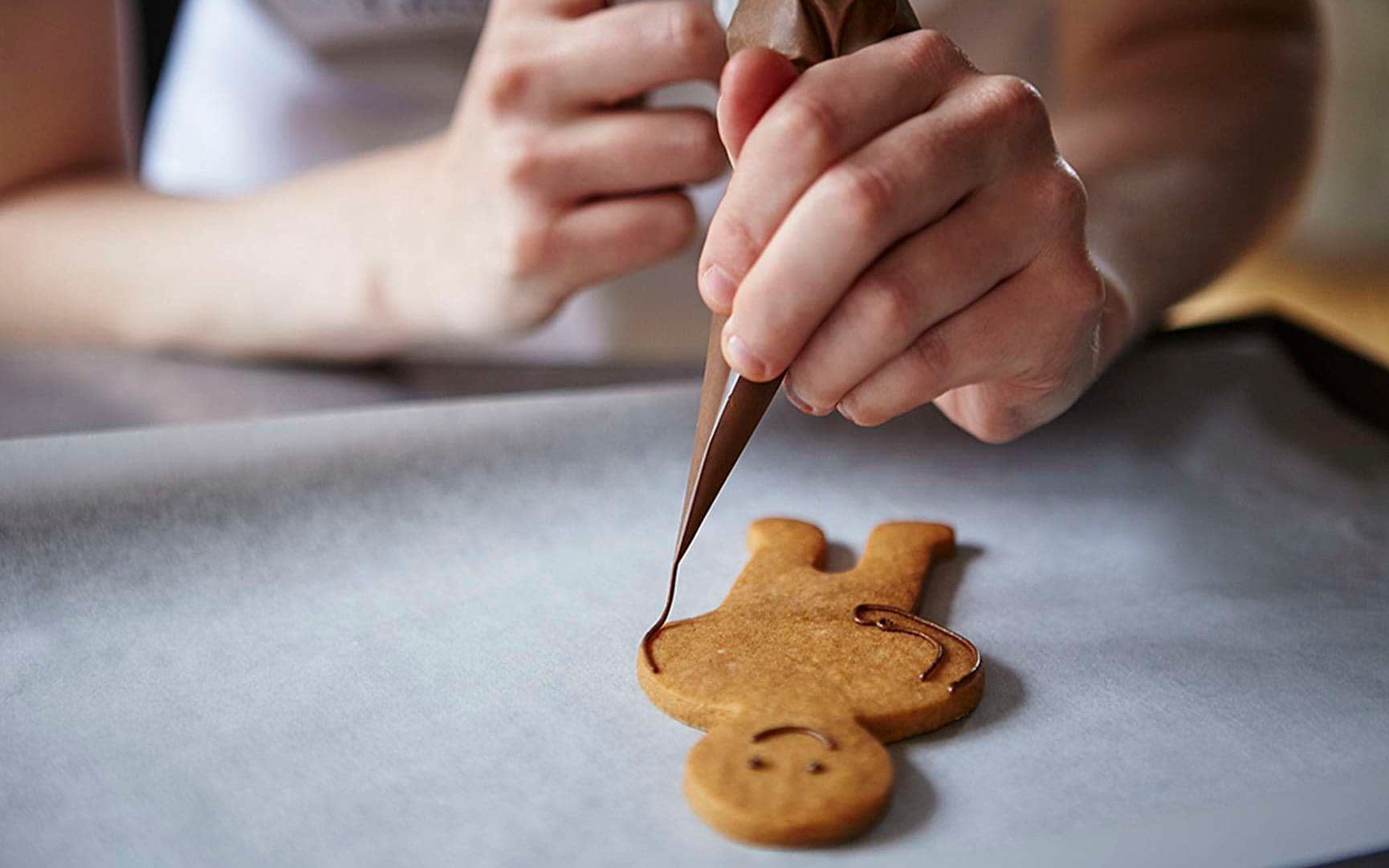