Over 16.9 million people across the globe have been diagnosed with COVID-19, the disease caused by the new respiratory virus, according to data compiled by the Center for Systems Science and Engineering at Johns Hopkins University. The actual numbers are believed to be much higher due to testing shortages, many unreported cases and suspicions that some governments are hiding or downplaying the scope of their nations’ outbreaks.

The United States has become the worst-affected country, with more than 4.4 million diagnosed cases. On Wednesday, the U.S. death toll climbed over 150,000 and now stands at 150,649.

Here is how the news is developing today. All times Eastern. Check back for updates.

Hawaii reported a record number of new COVID-19 cases on Wednesday, with gatherings contributing to the rise, officials said Wednesday.

There were 109 daily new cases — marking the first time that number has crossed 100 in the state, Gov. David Ige said at a press briefing.

There have been 958 cases so far in July — more than any other month so far, officials said.

“We are seeing infections occurring at personal gatherings of family and friends,” Ige said.

Funerals have also contributed to “a lot of the cases,” Bruce Anderson, director of the state health department, said.

Los Angeles County reported its highest number of deaths from COVID-19 on Wednesday.

There were 91 new deaths, though officials said that there was a backlog in reporting and some of the deaths occurred earlier. There have been 4,516 total COVID-19 deaths in the county.

Outside of institutions, two-thirds of those deaths were men, Mayor Eric Garcetti said at a press briefing Wednesday.

The U.S. has recorded its highest number of deaths from COVID-19 since mid-May, according to The COVID Tracking Project.

There were 1,418 deaths reported on Wednesday, the most since May 15, the project found.

The project noted that the state has changed its method of counting deaths, and Hurricane Hanna may have caused some backlog, possibly impacting the number reported.

Marylanders ages 5 and up will now be required to wear face coverings in public spaces of all businesses and outdoors in public when physical distancing is not possible. The new order goes into effect Friday at 5 p.m. It expands upon the existing order, in effect since April 18, which required face coverings in stores and on public transit.

The state is also immediately advising against travel to states with positivity rates of 10% or higher. As of Wednesday, the state said its advisory applies to nine states: Alabama, Arizona, Florida, Georgia, Idaho, Louisiana, Nebraska, South Carolina and Texas.

Maryland is also pausing its reopening, Hogan said; statewide it is in stage 2 of a three-stage plan.

Maryland has 86,285 confirmed cases of COVID-19, according to state data. Its testing positivity rate is nearly 5%. Hospitalizations and new cases have increased steadily in July.

The state had never reported more than 200 in a single day.

Twenty-one of these are “new emerging hot spots.”

Among the new emerging hot spots are New Jersey’s Camden County, located near Philadelphia, and Mercer County, which includes Princeton and Trenton. These counties had not been on the hot spot list since April 13.

Atlantic County, New Jersey, which includes Atlantic City, has also returned to the list, last appearing on May 3.

Georgetown University is moving classes fully online this fall for undergraduate and graduate students “due to the acceleration of the spread,” the administration said Wednesday.

MORE: Timeline: How coronavirus got started

Earlier this month Georgetown said it planned to bring some undergraduates, including freshmen, to campus.

“We are revising this approach based on current pandemic conditions,” Georgetown President John J. DeGioia said. “We plan to introduce in-person course elements as soon as health conditions permit.”

Neighboring George Washington University announced Monday that all undergraduate courses would be online this fall.

Alabama’s “safer at home” order, which was set to expire this Friday, has now been extended until the end of August, Gov. Kay Ivey said Wednesday.

This includes extending the statewide mask ordinance through Aug. 31, Ivey said at a news conference.

At school, second-graders through college students are required to wear masks, she said.

Ivey said she encourages schools to phase-in classroom learning when and where possible.

“I respect those districts that have elected to go to virtual classrooms,” Ivey said, adding that she believes “a slide will come by keeping our kids at home.”

“And that slide is likely to have a dramatic, negative impact on Alabama’s future — our young people,” the governor said.

Alabama has over 81,000 confirmed cases and more than 1,400 confirmed fatalities, according to state data.

In hard-hit Florida, 217 new fatalities were reported in the last 24 hours — a second day in a row of record-setting deaths, the state’s health department said Wednesday.

On Tuesday, the department said a record 191 new fatalities had been reported in the previous 24 hours.

MORE: Inside the grueling front lines of COVID first responders

Throughout Florida, 15.69% of the state’s adult ICU beds were available as of Wednesday morning, according to the state’s Agency for Healthcare Administration.

Three counties — Monroe, Okeechobee and Putnam — had no ICU beds, the agency said.

These numbers are expected to fluctuate throughout the day as hospitals and medical centers provide updates.

Congressman Louie Gohmert, a Texas Republican who has refused to wear a mask, has tested positive for the coronavirus, sources told ABC News.

His staff has not responded to requests for comment.

Gohmert was in the House Judiciary Committee hearing on Tuesday for Attorney General William Barr’s hearing.

Barr will be tested for COVID-19 on Wednesday, Department of Justice spokesperson Kerri Kupec said. Video from Tuesday showed Gohmert walking into the hearing room in close proximity to Barr; neither wore a mask.

Gohmert is the 10th member of Congress to be diagnosed with COVID-19.

According to Escott, school district officials say 20% to 25% of students are expected to learn from home when the school year begins, KVUE reported.

Travis County, which includes Austin, has over 19,900 coronavirus cases, according to county data.

8:54 a.m.: Deaths on the rise in western Washington for 1st time since March

Coronavirus deaths are on the rise in western Washington for the first time since March, the state’s department of health said Tuesday, according to ABC Seattle affiliate KOMO.

Deaths are continuing to rise in eastern Washington, KOMO said.

There’s a new concentration of cases among young adults, the report said, according to KOMO.

Hospitalizations are on the rise with most age groups, the report said.

“We are still at great risk for significant growth as the virus continues to spread in Washington state,” Secretary of Health John Wiesman said, according to KOMO. “And, as it moves into more vulnerable age groups, I am very concerned that hospitalizations and deaths will continue to increase.”

Texas Gov. Greg Abbott announced Tuesday that the McAllen Convention Center would be transformed into a temporary medical facility to treat coronavirus patients.

Abbott visited the Rio Grande Valley on Tuesday to survey damage caused by Hurricane Hanna and meet with local leaders — who are contending with both hurricane damage and the coronavirus pandemic.

“And if there’s one thing that I want to emphasize to everyone in the Rio Grande Valley it is this: This hurricane has not eliminated COVID-19,” Abbott said.

-The McAllen Convention Center will be transformed into a temporary medical facility to treat coronavirus patients. The convention center’s maximum capacity will be 250 patients, Abbott said.

-The U.S. Department of Defense will deploy additional medical teams to the Valley. A U.S. Army Reserve unit arrived in Cameron County on Tuesday to assist local hospitals.

Another U.S. Army Reserve unit will arrive in Hidalgo County on Wednesday to assist DHR Health.

“This is on top of the more than 2,000 medical personnel that we have already allocated to this region,” Abbott said.

Seventy-three people are now part of a COVID-19 outbreak in Lake Zurich which has been traced back to several Fourth of July gatherings, health officials said.

The outbreak was first detected in a group of Lake Zurich High School students earlier in July. Lake County, Illinois, health officials said contact tracing has now led them to believe the infections stem from multiple July 4 parties, and was not the result of a super spreader event.

The outbreak was detected on the first day of an athletic camp scheduled to take place to Lake Zurich High School, when several students tested positive during an initial health screening. The camp was cancelled, and a mobile testing unit was sent to the high school for several days. Free testing was offered to those in the area.

“At least half of the cases are Lake Zurich High School students, but there are also parents and family members and people from other community members tied to this outbreak,” Goering said.

County officials said during this process they’ve had some trouble with contact tracing, as many people have either ignored messages, delayed responding, or simply didn’t pick up the phone. They said they really need anyone who is contacted by a tracer because of possible exposure to COVID-19 to take the call seriously and get themselves tested as soon as possible.

An internal FEMA memo obtained by ABC News reports that new cases are going down but deaths are surging.

In the seven days ending Monday, new cases nationwide have decreased 0.6% from the previous week but that time period also saw a 30.1% increase in deaths from the disease and deaths have been increasing steadily in recent days.

1:59 a.m.: Alaska requiring all visitors to have negative COVID-19 result within 72 hours prior to arrival

Alaska Governor Mike Dunleavy announced Tuesday evening that all visitors to the state will have to present a negative result on a COVID-19 test performed within 72 hours prior to arrival. The policy goes into effect on August 11.

“If you are going to other countries you require shots so we are not trying to make this difficult when you come here. We just want to make sure we are taking care of Alaskans first,” said Alaska Governor Mike Dunleavy during a press briefing.

Coronavirus updates: 150,000 dead in US originally appeared on abcnews.go.com 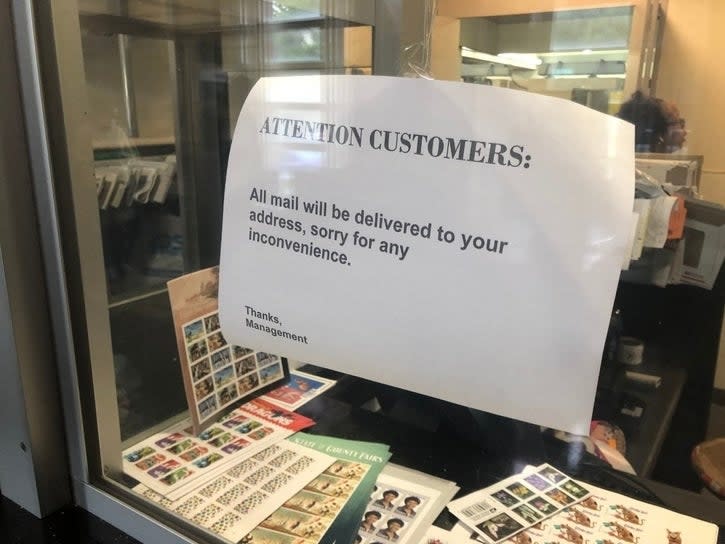