Stars, heat and humidity, and the temperament of mercurial elders in one’s family have to align to set the wedding date in India. And the window to get married is anyway limited.

At the time India’s coronavirus lockdown began in March, the wedding season was anyway about to close, and the pandemic seemed much more temporary than it is now.

So the temporary changes of March through June—masks, social distancing, pared-down guest lists, and online streaming—are most likely going to be prominent features in the upcoming wedding season. A new normal of a mere 100 guests, to begin with, was not something many couples could have imagined, but is a change that they see as a blessing in disguise.

“I always wanted a small wedding, but my fiancé’s and my parents never agreed. A 100-person guest list would have created a scandal had we suggested it,” laughs Anukriti Singh, a 31-year-old consultant with a Mumbai-based financial services company. Singh and her fiance, Vinayak Kalra, had pushed their wedding from an earlier date of April 14 to Nov. 21. “Once our parents understood the pandemic was here to stay, and given the government regulations around these events, they caved in,” Singh says.

In this time of economic uncertainty and general distress, Singh says saving the Rs15 lakh ($20,445) on her wedding expenses is a bright silver lining. “Honestly, this is the best outcome of a very grim situation,” she says.

Singh is not alone in this feeling. Middle-class Indian families often get themselves into serious debt trying to get their kids married off, with events often running into days. A 500-attendee wedding is considered almost par for the course, at least in most Hindu mainstream weddings. The larger the family—or the higher it is on India’s unequal social ladder—the longer this list gets.

A smaller guest list—though it is only one aspect of the great Indian wedding gala—has huge ramifications for how the wedding industry recalibrates itself for leaner weddings.

How Indian wedding venues will change

For starters, the biggest impact is on the kind of venue couples now select.

In this scenario, star-rated hotels in India are seeing a surge in demand for the upcoming November-December wedding season, partly due to the trust people have in their safety measures.

“Our ballroom is almost entirely booked for the 17-18 days of the upcoming wedding season in November,” says Kush Kapoor, CEO of Roseate Hotels & Resorts. While this is largely due to the backlog of cancelled weddings, he says that the Delhi hotel’s smaller venues are also now booked up for wedding events. “Our restaurant, Kheer, was occasionally used for high-end gatherings, but this is now booked for smaller wedding events. Even our rooftop poolside area is being snapped up,” Kapoor says. “Before the pandemic, we were not aggressively pushing for these venues for weddings. But now with a smaller guest list, it has given us an opportunity to utilise our spaces more efficiently,” he adds.

With this change in trend, hotels are also becoming a popular choice because of the packages they now offer.

Hotels such as The Ritz-Carlton in Bengaluru have created special packages for such smaller weddings. A 50-person reception, for instance, is priced at Rs 1 lakh plus taxes, and includes the usual bells & whistles of buffet, complimentary suite for the bride and groom, use of room for the family, and continuous service of tea & coffee. While the price of the package itself may not have been drastically higher, the 50-person package reduces the overall cost to a tenth of what it would have been pre-Covid-19.

Both Roseate and The Ritz-Carlton, Bengaluru are focussing on safety and hygiene constant sanitisation of all common touchpoints, temperature checks of staff and guests, and ample space to maintain distance. This psychological assurance of safety has helped keep the event queries up for hotels. “The year-end is looking very healthy in terms of social events,” says Upasna Madan, director of marketing, The Ritz-Carlton, Bengaluru.

This also means that the quintessential stage—often resembling a grand throne—is now nearly absent from the wedding venue. “I see a change in the way smaller weddings will look more polished and have more personalised decor,” says Roseate’s Kapoor. The buffet, too, would likely be converted to sit-down meals, or counters where the hotel staff would serve guests.

The next big-ticket expense is precious jewellery, which seems to be going through a leaner makeover of its own.

Culturally, Indians love their gold jewellery because it is a traditional aesthetic and a sense of investment rolled into one purchase. But prices of gold have been at an all-time high this year.

That, coupled with an overall depressed economy and now smaller weddings has changed the way Indians buy gold for their weddings.

“It would be incorrect to say that jewellery purchase by individual customers has remained unaffected by the ongoing pandemic. The complete lockdown did have an immediate and hard-hitting impact,” says Sunil Nayak, CEO of Reliance Jewels, which operates jewellery showrooms across the country. While he says that spending on gold has picked up since physical stores reopened, wedding jewellery trends are witnessing a change.

“For this upcoming wedding season, there is a lot of demand for lightweight and functional jewellery. These are more wearable pieces, some are reversible and detachable as well,” Nayak explains.

Old jewellers, those who deal in more intricate and traditional jewellery-making craft, are also noticing brides opting for fewer pieces. “The mindset of brides has changed because of the current scenario. It has made them more self-aware and conscious of what they are buying,” says Abhishek Raniwala, co-founder of Raniwala 1881, a bespoke jewellery brand based in Jaipur. “Brides are now choosing quality over quantity, looking for things they would carry in their trousseau rather than merely wear on their wedding day,” he says.

The brand has also seen a significant uptick in its daily wear line from millennial women.

A limited guest list, in such cases, is a big boon. “There is no pressure from extended relatives or the elders in the family to buy specific things or dress a certain way,” says Aashima Gupta, a Lucknow-based school teacher, whose wedding is scheduled for Dec. 3. “I have more autonomy in these financial decisions than I normally would have had. I get to decide how much to spend, what jewellery to buy, and whether I want to give gifts to a handful of people or my entire family,” she says.

Will this be a lasting change, though? Industry insiders are sceptical.

Smaller weddings are just a phase

The trends Sagar is noticing are contradictory and point to how weddings themselves, though a massive, labour-intensive industry, are unique to every community and income strata. “There are two kinds of people I have now seen. One category is the one that is strictly sticking to rules, being very responsible, etc. They welcome the smaller guest list,” she says. “The other category has found a workaround. These families invite a different set of 100 people to different events so as to accommodate all relatives.”

Bizarre as it may seem, relatives taking umbrage to a missing wedding invitation is almost a fixture in wedding festivities. And the desire to make one’s wedding a grand, Bollywood-like affair doesn’t seem to be dying down either. For instance, the engagement event in Hindu weddings is the time when families exchange gifts—clothes, sweets, jewellery. In its pared-down version, couples are now sending elaborate boxes to those who could not attend the physical wedding, according to Sagar.

“Most people are spending as much on their clothes and makeup, the photography, and even the decor,” Sagar explains. But she says despite that, weddings are about 40% cheaper because of fewer events and a tiny guest list.

In whatever form—modular, micro, or a broken-down gala—weddings in India are serious business and are going to make a comeback as the season returns. “Wedding venue queries on our platform are up three-fold from the pre-pandemic time,” Sagar says.

There’s no stopping the Indian wedding, big and fat, or small and lean.

Sign up for the Quartz Daily Brief, our free daily newsletter with the world’s most important and interesting news.

Sat Sep 19 , 2020
Covid-19 has heralded an era of eating on the couch. The world has changed and so has the thinking about culinary gatherings. We baulk at the idea of conviviality. Life is all about masks and social distancing, contactless encounters and online ordering. At a time of public health and financial […] 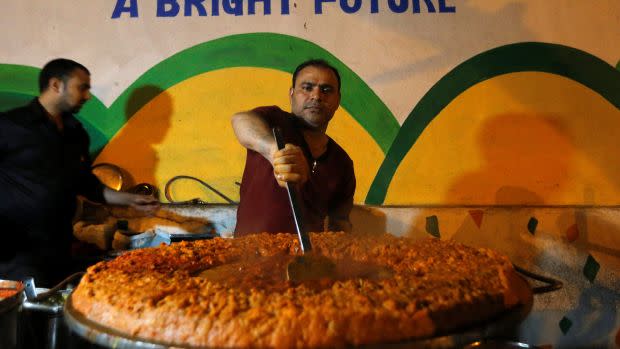