Senator Lindsey Graham (R., S.C.) on Sunday advised the president not to grant presidential pardons to the rioters who stormed the Capitol this month, warning that doing so would “destroy” Trump. “Mr. President, your policies will stand the test of time. You’re the most important figure in the Republican party. You can shape the direction of the party. Keep your movement alive,” Graham said on Fox News. “There are a lot of people urging the president to pardon folks who participated in defiling the Capitol, the rioters,” Graham continued. “I don’t care if you went there and spread flowers on the floor, you breached the security of the Capitol, you interrupted a joint session of Congress, you tried to intimidate us all, you should be prosecuted to the fullest extent of the law, and to seek a pardon of these people would be wrong. I think it would destroy President Trump and I hope we don’t go down that road.” On Wednesday, a large group of Trump supporters overpowered Capitol Police and forced their way into the halls of Congress. Pence and the assembled lawmakers evacuated the Senate floor, where a joint session of Congress was being held to certify the presidential election results. The violence followed a rally outside the White House earlier in the day where President Trump addressed the “Save America March” and repeated his claims that November’s election was rife with voter fraud that threatened to deprive him of his rightful second term. The violence on January 6 resulted in five dead, including a Capitol Police officer. Since then, dozens of criminal cases have been brought in connection with the riot. Graham defended Trump’s rhetoric at the rally, which received bipartisan condemnation and sparked a second impeachment against the president by House Democrats. “President Trump never said, ‘Go into the capitol and try to interrupt a joint session of Congress.’ That was the choice they made and they need to live with that choice,” Graham said. Graham added that there were “irregularities in mail-in voting,” but said “the election is over,” noting that the electoral votes have been certified.” “It is now time to move on,” the South Carolina Republican said. Graham also had a message for incoming president Joe Biden, calling on him to stand up against the second impeachment of Trump, which the Senate is expected to take up after he leaves office.

The fight to avert one last execution on Trump's watch [Video]

Mon Jan 18 , 2021
TERRE HAUTE, Ind. (Reuters) – On Thursday evening, Dustin Higgs, 48, waited in a cell on death row at the federal prison in Terre Haute, Indiana, his scheduled execution less than 24 hours away. A five-minute drive down the road, members of his legal team sat around a laminated plastic […] 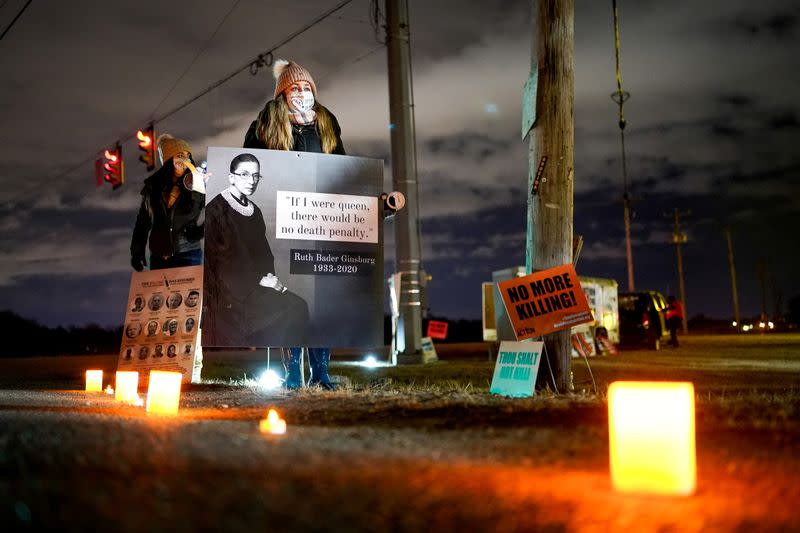