Fort Myers officials want to study whether City of Palm Parks could be turned into an amateur multi-sports complex.

Lee County, which owns the the former spring training home of the Boston Red Sox, is set to demolish the 27-year-old park before turning over the land to the city.

The land is part of the city’s redevelopment efforts in Midtown, a 240-acre area bounded by Dr. Martin Luther King Jr. Boulevard to the north, Edison Avenue to the south, Cleveland Avenue to the west and Evans Avenue to the east.

A cyclist moves past the The City of Palms in downtown Fort Myers on Wednesday May, 22, 2019. It is in the heart of mid town.  (Photo: Andrew West/The News-Press)

Fort Myers Ward 5 Councilman Fred Burson discussed the park at a city meeting last week, asking the city to hire professional planners to look at the possibility of turning the ballpark property into a multi-use sports facility.

“I was just trying to think of something we can create that was something different,” said Burson, who has a long history of working with Little League, high school and amateur baseball competitions. “I do want to redevelop it. I am not necessarily looking to build a baseball stadium.”

Ultimately, Burson said, the land needs to house something that will attract visitors to Southwest Florida in order to help support the Luminary Hotel, which opened in downtown Fort Myers in September as well as other hotels in various stages of planning.

During the summer,  Perfect Game, an amateur baseball organization, hosted tournaments that brought about 32,000 people to the region, Burson said.

“Building an amateur all-purpose facility that will attract people to downtown Fort Myers,” Burson said. “A lot of those amateur sports are down (here) during the summer when hotel business is a little slow.”

The city’s plans to redevelop Midtown, at first, included bringing a multi-use concept to the area that included retail space, along with office space and residential homes.

During last week’s meeting, Burson said, “I know there’s been a lot of discussions about Midtown being apartments and offices and things of that nature but the reality is we have a huge investment in downtown Fort Myers,” referring to the Luminary Hotel.

“We need to do something to draw people downtown to support that hotel,” he said. “If we want to see that hotel be successful we have to create a reason for out-of-town people to come to downtown Fort Myers.”

City of Palms Park as it is now needs to be torn down in order to make way for something better, Burson said.

“There’s no economic value right now to the way it is,” Burson said.

But an indoor, multi-use facility could bring people to the area, he said.

The $50 million stadium was built in 1993 to house the Red Sox for spring training and as an incentive to reinvigorate the surrounding neighborhood.

The city deeded it to Lee County in 2003 because it was burdened by the upkeep costs, but has continued to pay down the debt on the stadium and is scheduled to finish paying it off in 2022, according to city officials.

The Red Sox left the park in 2012 for a new JetBlue Park which opened in south Fort Myers. Since then, City of Palms has hosted youth sports events including Perfect Game tournaments, community events and the Florida SouthWestern State College baseball and softball programs.

Fort Myers is expected to resume ownership of the land by next fall after it’s demolished, according to Lee County spokeswoman Betsy Clayton. She declined to comment on the future of the park or its potential impact “because it would be speculation, as city leaders appear to only be at the discussion phase.”

Jeff Mielke, executive director of Lee County Sports Development, told an audience at a recent Tiger Bay Club meeting that sports tourism was alive and thriving in Lee County despite the pandemic.

“There’s so much pent up demand for sports,” Mielke said to the nonprofit civic group. “A lot of places are struggling to get back.”

Mielke said it’s his department’s job to attract sports organizations to the area. And sports facilities can be used for both the community and to energize the economy, he said.

“Monday through Friday they’re being used by the kids in our communities or adults and seniors to take Zumba classes … and then some weekends they turn into sports venues where we can bring in all of these programs where we can generate that economic impact,” Mielke said.

Matt Simmons, a property appraiser for Maxwell, Hendry and Simmons in Fort Myers, said in order to activate Midtown, the city needs to create something that will become a catalyst for the rest of the neighborhood to follow.

“That’s the benefit of mixed-use,” Simmons said. “If you really kind of plan and design something that works for the neighborhood, you want to do things to enhance property values and therefore the tax base.”

Simmons gives the example of Truist Park, home of the Atlanta Braves near downtown Atlanta, and how a whole retail center, The Battery, has been developed to support the stadium.

“It’s rows of shops and restaurants,” Simmons said. “It’s even multi-family on second or third floors and then all of a sudden, you are at the baseball stadium. There’s people there year round. They live there and they work there. It can be winter and baseball is months away and yet it’s packed with people. That’s a way to make it so that a project or an area is more self-sustaining.”

Allison Gruber, executive director of the nonprofit Lee County Sports Organizing Committee, said any new facilities would be a benefit for sports tourism in the area.

“I’ve been doing this for 20 years and I think any kind of sports venues would be wonderful for our area because sports tourism is very competitive,” Gruber said. “We have a lot of hotels coming online and we’ll need sports events do help them get through the summer seasons.”

At the Crowne Plaza Hotel, General Manager Jim Larkin estimates that anywhere from 30% to 50% of his business comes from sports tourism during the off season.

“Generally speaking, it has a bigger impact on our weekends for our property because we tend to be more of a business corporate hotel,” Larkin said. “Our weekends are generally slower because business is usually not traveling on the weekend.”

“They fill a nice void for us,” he said of sports tourism.

‘It’s going to be busy.’ How to navigate Charlotte’s airport during the holiday season

Mon Nov 23 , 2020
People flying through Charlotte Douglas International Airport could be in for packed lines this week, as the airport prepares to see its busiest days of travel since the start of the coronavirus pandemic. The busiest single day of travel during the Thanksgiving holiday is expected to be this coming Sunday, […] 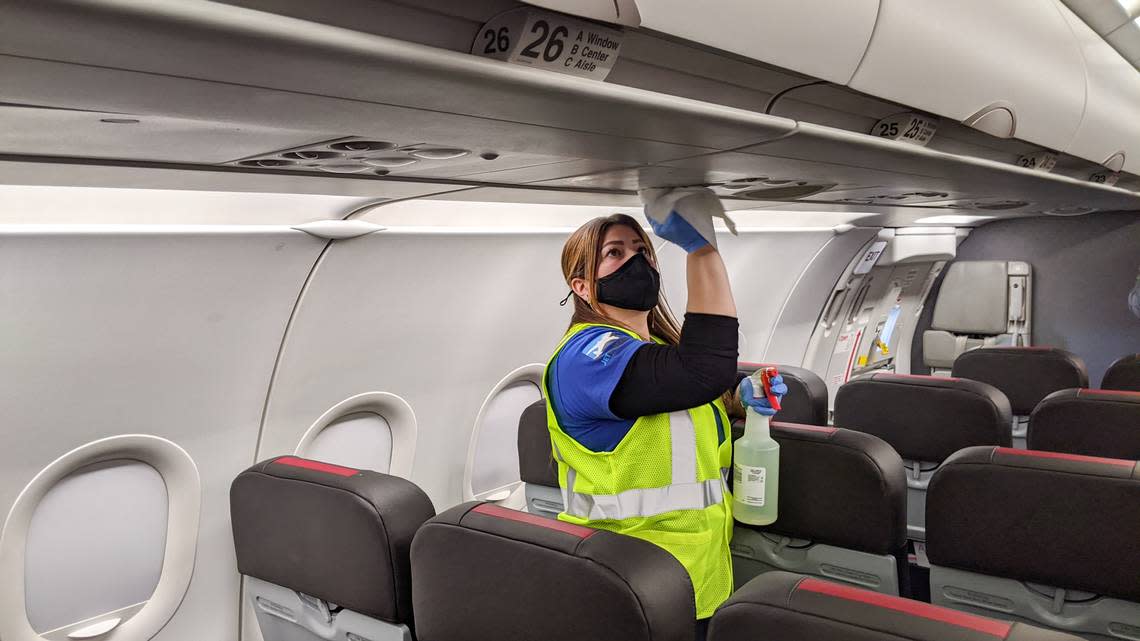