Mecca (Saudi Arabia) (AFP) – Chinese pilgrim Ni Haoyu welled up with tears of joy after being handpicked from among millions of Muslims vying for this year’s hajj pilgrimage, which has been drastically curtailed due to the coronavirus pandemic.

Up to 10,000 people residing in Saudi Arabia are allowed to take part in this year’s hajj, evoking the envy and awe of millions of international would-be pilgrims who have been barred for the first time in modern history.

In a hugely sensitive decision, Saudi authorities decided to scale down the pilgrimage —- which last year packed 2.5 million pilgrims into the holy sites —- to prevent it from becoming a super spreader event for the deadly disease.

“I am overwhelmed with feelings of joy since I have been chosen to perform the ritual,” said 43-year-old Ni from China, who is pursuing a master’s degree at the Islamic university of Madinah.

“I couldn’t stop myself from crying after God fulfilled my desire to do the hajj without any financial cost,” added Ni, recalling the moment he received a text message from Saudi authorities confirming he had been selected.

The hajj, a key pillar of Islam, typically costs thousands of dollars for pilgrims, who often save for years as well as endure long waiting lists for a chance to attend the ritual.

But this year, the Saudi government is covering the expenses of all pilgrims, providing them with meals, hotel accommodation and health care, worshippers said.

Despite the pandemic, many pilgrims also consider it safer to participate in this year’s ritual without the usual crowds thronging the religious sites.

The colossal crowds in previous years have led to deadly stampedes, and they make the ritual a logistical nightmare and a potential health hazard.

“I can perform my rituals away from crowds, which creates an atmosphere of spirituality and tranquility,” Wajdan Ali, a 25-year-old Saudi nurse, who was selected after she recovered from the virus.

“The atmosphere is very different from past pilgrimages, which saw… millions of pilgrims in Mecca,” added Ali, who is from the Red Sea city of Jeddah.

Pilgrims have been given electronic wristbands to allow authorities to monitor their whereabouts when they are quarantined, with Ali calling it a “precautionary measure”.

Authorities have enforced strict protocols to prevent an outbreak of coronavirus.

Pilgrims, who have all been tested for the virus, are required to wear masks, observe social distancing, and are subject to regular temperature checks during the hajj rituals completed over five days.

Pilgrims also said they were given ihram, the traditional seamless white hajj garment, made from a bacteria-resistant material.

Even as the chosen pilgrims count themselves fortunate, many do not know why they were selected over other contenders in an online selection process.

“I was chosen through the website and I don’t know why,” said Cai Haobi, a 31-year-old student at Umm Al-Qura University in Mecca.

“A number of my colleagues at the university applied, but they all got letters apologising for not accepting them.”

Saudi hajj authorities initially said around 1,000 pilgrims would be allowed this year, but local media later said as many as 10,000 were picked.

Foreign residents make up 70 percent of the chosen pilgrims, selected through what is widely seen as an opaque government-run lottery.

Saudi citizens make up the remaining 30 percent of the pilgrims, with the ritual restricted to medical professionals and security personnel who have recovered from the virus.

Whatever the method, it worked in the favour of Filipino restaurant worker As-Shammar.

“I did not expect to be chosen,” As-Shammar said.

“I came to Saudi Arabia one year ago, and I intended to perform the hajj after two years after I save up enough (money)… But the coronavirus and the selection process helped me do hajj this year instead.”

Thu Jul 30 , 2020
At Kiplinger, the name of the game is value. For more than 20 years, our annual college rankings have been no exception. Over the years, we analyzed data on hundreds of public and private colleges and universities across the nation seeking institutions that deliver a high-quality education at an affordable […] 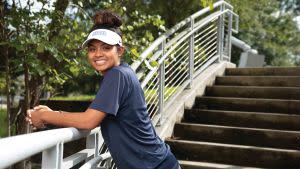