LONDON — Even before he saw the full set of first quarter figures from the luxury groups including Swatch, Burberry and Compagnie Financière Richemont, Luca Solca of Bernstein knew they were going to make for difficult reading.

In a report earlier this week on Swatch, Solca noted this current reporting period would be “the worst first-half update in the modern luxury goods industry’s history,” and that Swatch was firing “the opening salvo.”

He was not exaggerating: Swatch, the world’s biggest maker of watches, saw first-half sales fall 46.1 percent and its bottom line crumble. A day later, Burberry reported a 48.4 percent decline in Q1 sales and plans to lay off 5 percent of staff globally, while Richemont followed on Thursday with news that sales were down 47 percent in the three months to June 30.

The owner of brands including Cartier, Van Cleef & Arpels, Dunhill and Chloé said in a trading update Thursday that its performance reflected “unprecedented” levels of disruption and widespread temporary closures of internal, franchise and multibrand retail partner stores, as well as the closure of fulfillment centers belonging to its online distributors, such as subsidiary Net-a-porter.

The one bright spot for these beleaguered brands was China, the only region that notched gains — double-digit ones — at Burberry, Richemont — and a host of other luxury brands and groups.

On Thursday, Richemont said sales in China grew 49 percent, and were the engine behind sales in the Asia-Pacific region, which totaled 1.01 billion euros in Q1. While Richemont didn’t put a value on sales in the region, it said China delivered triple-digit online growth and “very strong” domestic retail sales “in the absence of purchases in foreign markets.”

It was a similar story with hard luxury: Although Richemont’s jewelry sales were down 41 percent in the period, demand in China increased by 68 percent, with sales growth fueled by increased online and offline retail spend, and the contribution of the recently opened Cartier flagship on Tmall Luxury Pavilion.

The news, however, was not enough to boost Richemont’s share price: On Thursday, shares in the luxury goods giant closed down 4.6 percent at 61.38 Swiss francs.

Burberry had a similar story to tell: In the first quarter, its sales in Mainland China grew in the mid-teens, and swelled to 30 percent in June. Luxury giants LVMH Moët Hennessy Louis Vuitton and Kering also saw a rebound in China when they reported Q1 numbers in April — before the global shutdown had any true impact — while Hermès was part of that club, too.

The Hermès flagship in Guangzhou’s Taikoo Hui was said to have brought in the highest, single-day sales for a luxury brand in the country on a single Saturday in April, with high-end shoppers documenting their shopping trip across Chinese social media like Weibo and Xiaohongshu.

Earlier this month, Prada’s Patrizio Bertelli told WWD that as the health situation in China and Asia has begun returning to normal, “we have seen a fast and sustained return to consumer spending. In the entire area, sales are growing at important — double-digit — rates and we are confident that this trend can continue also in the months to come.”

As Richemont said, China’s consumers are spending locally rather than on holiday in Japan, Europe or the rest of Asia.

Yet, while China may be the largest single market for many luxury names such as Burberry — where 40 percent of sales come from Chinese consumers — the country cannot carry the luxury goods business by itself.

Solca also believes the latest Chinese figures should be taken “with a pinch of salt. Sales in China are growing strongly year-on-year, but that is also due to the spend repatriation coming from consumers not traveling abroad any more. The net effect is that those revenues will not appear in Europe, for example.”

He said that while developments in China are encouraging, they’re “not necessarily a sign that we are out of the woods. Besides, the macroeconomic outlook is stronger in China, OK in the USA and very negative in Europe. That will mean European domestic spend” will likely be on the defensive for longer.

Right now, any rebound within a single geographic region — no matter how important — will be marginal for luxury goods businesses. It is only when people can travel internationally once again, and not have to line up outside shops or socially distance themselves once inside them, that these high-end businesses will begin to recover.

It is no mystery why some luxury department stores are empty in Paris — despite the summer sales having started — and why Harrods plans to lay off up to 14 percent of its workforce of 4,800.

Earlier in July, in a note to staff, managing director Michael Ward called these past few months a “terrible period” for Britain and said it would take “time and a drastic improvement in external conditions” for the retailer to recover and return to growth.

He added that social distancing measures are having a “huge impact” on the store’s ability to trade, “while the devastation in international travel has meant we have lost key customers coming to our store and front-line operations. While early signs since reopening are optimistic, this recovery will take longer than any of us would like.”

Harrods has, in the meantime, opened its first outlet at Westfield London to shift current spring/summer — and eventually fall/winter stock — and that is aimed mostly at a local audience, rather than tourists.

Mulberry has also put the wheels in motion to cut its staff numbers by 25 percent, for many of the same reasons.

The brand said that given the uncertainty about the impact and duration of COVID-19 on the company and the wider economy, as well as the impact of store closures, “we expect the recovery in our overall sales levels over the medium term to be gradual. Social distancing measures, reduced tourist and footfall levels will continue to impact our revenue.”

Consultations with unions are still taking place, and the number of layoffs has still not been confirmed.

On Wednesday, London’s New West End Company, which represents 600 businesses across Oxford Street, Bond Street, Regent Street and Mayfair, said it was suffering from a variety of factors — among them the disappearance of foreign tourists, who are the lifeblood of spending in central London.

Travelers from the U.S., one of the biggest luxury markets, are barred indefinitely from traveling to Europe — and most other regions — while Europeans’ travel is limited. It’s no wonder shops are empty and stores are waving goodbye to staff.

While footfall has been rising, London is still faring worse than the rest of the UK: It is 19 percent lower than the national average. New West End argued that without further action and support from the British government, the lack of domestic and international tourists and office workers could lead to a 5 billion pounds loss in sales, putting more than 50,000 jobs at risk.

“With no international visitors and mixed messaging surrounding the safety of returning to work and using public transport, we urgently seek clarity of government messaging for our businesses to survive,” said Jace Tyrrell, chief executive officer of New West End Company.

In the meantime, companies and organizations have been doing their best to drum up local sales. Back in May, Burberry started talking about localized and bespoke marketing strategies, and plans to take its activations and campaigns to areas as and when they reopen.

So far, that strategy appears to be working: A recent targeted leather goods campaign in China was a success, and Burberry said both China and Korea are now delivering sales ahead of pre-COVID-19 levels. The campaign featured pop-up stores offering an augmented reality experience, as well as a limited-edition Pocket Bag for Mr Bags’ WeChat followers.

Even with the best will, the second half will be far from stellar. On Thursday, Richemont gave zero indication of July sales trends, and what the second quarter might look like.

Burberry, meanwhile, said it expects the second quarter, which ends in September, to be “materially impacted by the pandemic, with tourist flows likely to remain negligible, and store operations continuing to face significant headwinds.” Some remain closed and those that are open are operating with reduced trading hours.

Burberry’s sales in Q2 are expected to decline by 15 to 20 percent. In the first half, wholesale sales are set to fall 40 to 50 percent.

On a brighter note, Swatch which reported a loss in the first half of 308 million Swiss francs compared with last year’s net profit figure of 415 million Swiss francs, believes the worst has passed, and said it expects positive operating result for the year.

Maybe that’s the opening salvo that signals better times ahead.

Fri Jul 17 , 2020
Click here to read the full article. MILAN — The Muse & Heroine sales agency is the latest beauty player adopting a direct-to-consumer approach. Founded in 2018 by Janine Knizia and counting physical showrooms in Milan and Paris, the agency will launch an online store on July 19 to offer […] 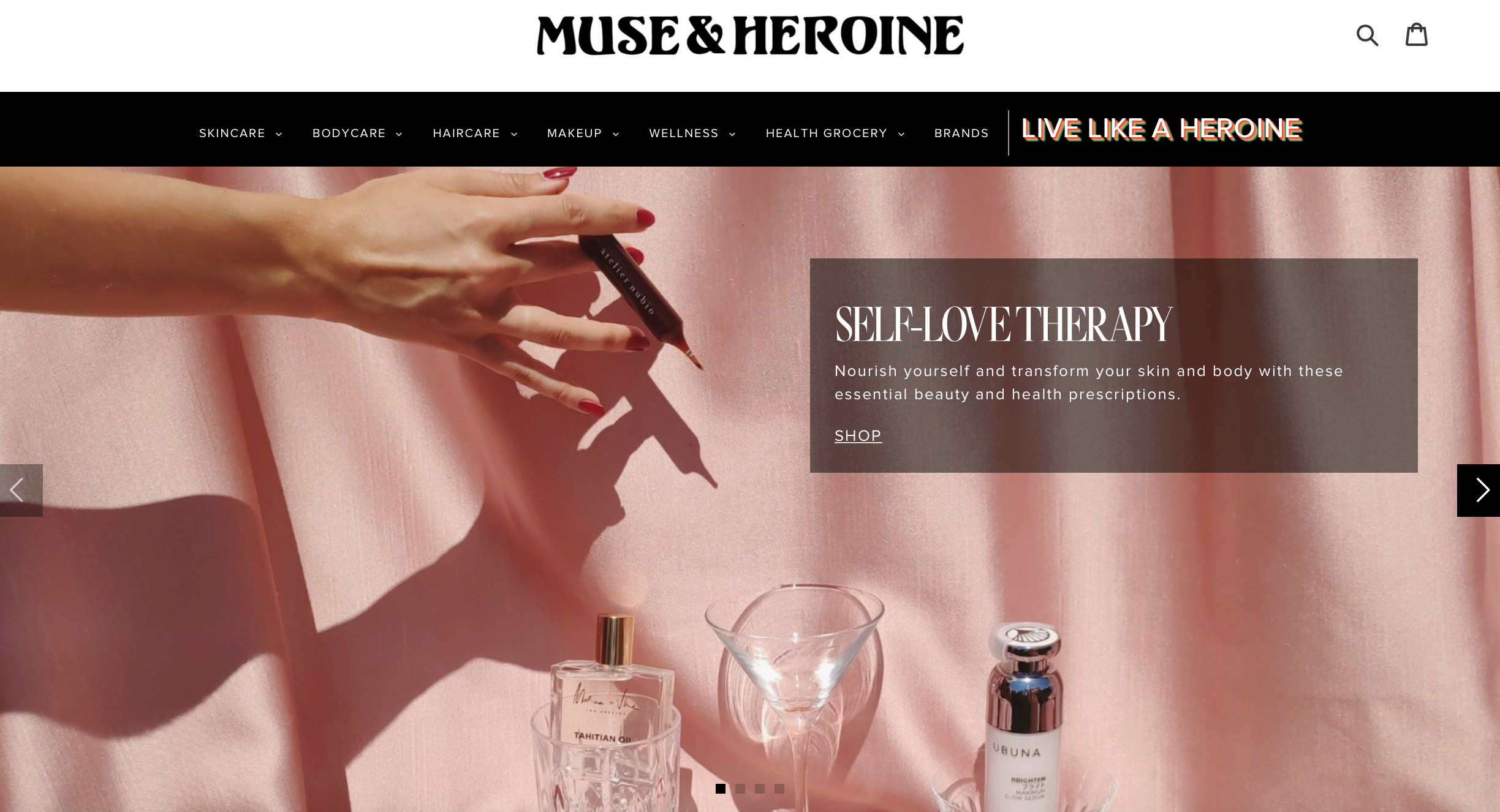