CHICAGO — Most Chicago children would return to the classroom two days a week and spend the other three days learning remotely once the school year begins, under a tentative plan outlined Friday.

A final decision about in-person instruction for fall classes won’t come until late August, with classes set to begin Sept. 8.

“We have to be ready for any possibility,” Mayor Lori Lightfoot said. “COVID-19 has been unpredictable from the start and we have a responsibility to be prepared for what the public health indicators dictate, whether that means remote learning, in-person learning or something in between.”

— WHO says larger inquiry team to arrive later in China.

— The launch of NASA’s successor to the Hubble Space Telescope faces seven more months of launch delay, this time because of the pandemic and technical issues.

— Plans for the weeklong celebration of rock ‘n’ roll icon Elvis Presley on the 43rd anniversary of his death will be a combination of in-person and online events at Graceland next month.

COLUMBIA, S.C. — Some hospital officials in South Carolina say the state is just weeks away from a COVID-19 medical crisis unless a six-week long spike of cases in the state slows down.

The number of patients hospitalized with COVID-19 is increasing rapidly, while nurses and other workers are being infected by rising cases when they are off work, said Dr. Wendell James, a senior vice president with Prisma Health based in Greenville.

James says Greenville hospitals can handle the surge unabated for only about two more weeks.

South Carolina had 1,578 people hospitalized with the virus Thursday, nearly 1,000 more than a month ago, health officials said.

The state has been in the top four in the nation for new cases when adjusted by population for most of the past month.

AUSTIN, Texas — Texas is giving public schools permission to keep campuses closed for more than 5 million students well into the fall while the state tries to contain one of the largest resurgences of the coronavirus in the U.S.

The changes announced Friday come a day after Texas set a daily record for virus deaths, with 129, and reported more than 10,000 new confirmed cases for a third consecutive day. It also follows a backlash from teachers and parents who criticized the earlier timeline as rushed.

President Donald Trump and his administration have demanded schools fully reopen. But under the new guidelines in Texas, schools could hold online-only instruction for up to the first eight weeks of the school year. That potentially pushes a return to campus until November in big cities, including Dallas and Houston.

The largest teachers’ organization in Texas says it’s too soon to say when it might be safe to return to campus.

PHOENIX — The largest health system in Arizona announced it will add about 1,000 out-of-state nurses and respiratory therapists to its workforce to help with the coronavirus pandemic.

The nurses and respiratory therapists are traveling health care workers who will take assignments across the country. The Arizona Republic reported that Banner Health has also hired 49 physicians and expects to hire 20 more to help with demand resulting from the pandemic.

ALBUQUERQUE, N.M. — Hundreds of people gathered in downtown Albuquerque to protest the governor’s handling of the coronavirus pandemic, calling it an infringement of their rights and freedoms.

KOB-TV reported the Protest for Freedom demonstration at the Civic Plaza on Thursday included members of Cowboys for Trump, the New Mexico Civil Guard, business owners and religious leaders.

“Big government telling us we can’t sit in a restaurant, but we can sit outside or we can crowd into Walmart,” Scott Chandler said. “None of it makes sense.”

Chandler is running for a seat on the state House of Representatives to represent District 32, which covers Chaves, Eddy and Otero counties.

The protest was about 2 hours and remained peaceful.

PRAGUE — Workers from three European Union countries — Bulgaria, Romania and Portugal — will need to present a negative coronavirus test to their Czech employers.

A negative test is also required from citizens of Sweden — the only EU country — and those from non-EU countries not on EU green lists. Otherwise, people must quarantine upon arrival.

The Czechs also re-imposed restrictive measures to contain local outbreaks in the northeastern region. Starting Friday, people in the region must wear face masks on public transportation and inside public places. Public gatherings, inside or outside, are limited to 100 participants.

LONDON — The World Health Organization’s emergencies chief says it is “unrealistic” to expect a larger team to arrive in China this month to investigate the animal origins of the coronavirus.

Last week, two WHO staffers flew to Beijing as part of an advance team to plan more studies into how COVID-19 first emerged. Experts believe the virus most likely moved to humans from animals. The investigation aims to prevent future outbreaks.

Dr. Michael Ryan says WHO was trying to put together a bigger team to visit China but doubted it would happen soon. WHO’s two experts are quarantined in a Beijing hotel. The U.N. health agency says there are no plans for them to visit Wuhan, where the outbreak was first detected late last year.

Field investigations at the origin of an outbreak are essential to determining an epidemic’s origins.

About 100 people in support of Sabatini’s stance rallied in front of the Pinellas County Courthouse when he filed the lawsuit Friday. Many held signs saying, “No mask – I have an immune system,” and “mandatory masks are unconstitutional.”

On June 23, the Pinellas County Commissioners voted 6-1 to require people to wear face coverings at indoor establishments to help stop the spread of the virus.

Sabatini, a lawyer who lives in the Orlando area, has sued Hillsborough County over a similar ordinance.

LONDON — The World Health Organization’s emergencies chief says Brazil has an opportunity to take control of the coronavirus outbreak in the country.

Dr. Michael Ryan says officials are no longer recording the explosive growth of cases in April and May and numbers appeared to have plateaued. However, he cautioned that stopping the epidemic would still require major interventions.

“What’s not happening yet is that the disease is not heading down the mountain,” he said. “Brazil is still very much in the middle of this fight.” He adds about 11% of all cases involved health workers.

Ryan says the lack of exponential growth offered Brazilian authorities a chance to reverse the trend of previous months.

“We need to set the rules for the virus now,” he said. “That opportunity exists now for Brazil to do that, but it is going to take a very sustained, concerted action for that to happen.”

In an interview on CBS “This Morning,” Bottoms questioned the timing of the lawsuit filed shortly after Trump’s visit on Wednesday.

“I pointed out that Donald Trump violated that order when he landed at our airport and did not wear a mask,” said Bottoms, who was recently diagnosed with the coronavirus.

She said Kemp “is a Trump loyalist and he seems to work very hard to please the president of the United States, and that is often at the expense of the people in our state.”

Kemp defended the lawsuit during a press conference Friday, accusing Atlanta officials of playing politics and not enforcing state orders already in effect. The Republican governor says the lawsuit was filed “on behalf of business owners, their employees and hardworking Georgians throughout the region who continue to struggle to make ends meet.”

He added: “Mayor Bottoms mask mandate cannot be enforced, but her decision to shutter businesses and undermine economic growth is devastating.”

Kemp and Georgia Attorney General Chris Carr, in a state court suit filed late Thursday, argued that Bottoms has overstepped her authority and must obey Kemp’s executive orders under state law. Bottoms and mayors of other Georgia cities say they’ll continue enforcing their mandates and were prepared to go to court.

Cameron says in a social media post that the ruling wouldn’t “hamper the ability of public health officials to ensure the safety and well-being of Kentuckians.”

Beshear’s office acknowledged Friday it was anticipating a court order that would “void all of the orders the governor has issued to keep us safe.”

“We are awaiting a written order and will be ready to take further action,” said Crystal Staley, the governor’s spokeswoman. “The lives of many Kentuckians are on the line.”

Holland America Line made the announcement after the U.S. Centers for Disease Control and Prevention on Thursday extended a ban on cruises in U.S. waters until the end of September to limit the spread of COVID-19, KING-TV reported.

Holland America is selling the Amsterdam, Maasdam, Rotterdam and Veendam, which reduces its fleet to 10, the company said. All cruises booked on the ships will be canceled or changed.

Seattle anticipated a record 1.2 million visitors this year, but the pandemic left countries questioning the safety of allowing potentially contagious passengers to disembark.

The cruise industry brings in an estimated $900 million annually and each vessel brings with it $4.2 million in regional economic activity, the Port of Seattle said.

JOHANNESBURG — Nearly 10,000 health workers in 40 African countries have been infected with the coronavirus, according to the World Health Organization.

More than half of infected workers are in South Africa, which makes up roughly half of the confirmed cases on the African continent as hospitals struggle to cope.

Sub-Saharan Africa already had the world’s greatest shortage of health care workers, with less than three per 1,000 people. Doctors, nurses or other workers have protested or gone on strike in some countries, fearing for their lives amid shortages of personal protective equipment.

MAPLEWOOD, Minn. — The leading manufacturer of N95 masks in the U.S. says it has investigated 4,000 reports of fraud, counterfeiting and price gouging in connection with the product and has filed 18 lawsuits.

3M, based in Maplewood, is among the largest global producers of the N95 mask, which has been approved by the U.S. National Institute for Occupational Safety and Health.

3M says courts have issued six temporary restraining orders and four preliminary injunctions so far to stop N95 sales that it says are unlawful. The company says in some cases, it has led to criminal charges.

“The schemes we shut down were not only unlawful, they also endangered lives and wasted precious time and resources by diverting buyers from legitimate sources of much-needed respirators,” said Denise Rutherford, 3M senior vice president of corporate affairs.

In one case filed in U.S. District Court in Minnesota, 3M sued Legacy Medical Supplies and four people connected with the company, claiming they were trying to sell 3M brand N95 respirators at a 75% to 267% markup over 3M’s list price, the Star Tribune reported.

The county’s commission unanimously approved an emergency order gives all code and fire inspectors authority to issue tickets of up to $100 for individuals and $500 for businesses not complying with guidelines to wear masks and practice social distancing. Police already had this enforcement power.

There were an additional 156 deaths for a statewide confirmed total of 4,766.

Inside Stanford’s Efforts To Welcome MBA Students Back To Campus

Fri Jul 17 , 2020
As the COVID-19 case count and the death toll from the virus continues to surge in California, plans for the reopening of in-person classes at Stanford’s Graduate School of Business have become increasingly complicated and stubbornly challenging. Shifting state and county guidelines, still-to-be-unveiled university protocols along with the spread of […] 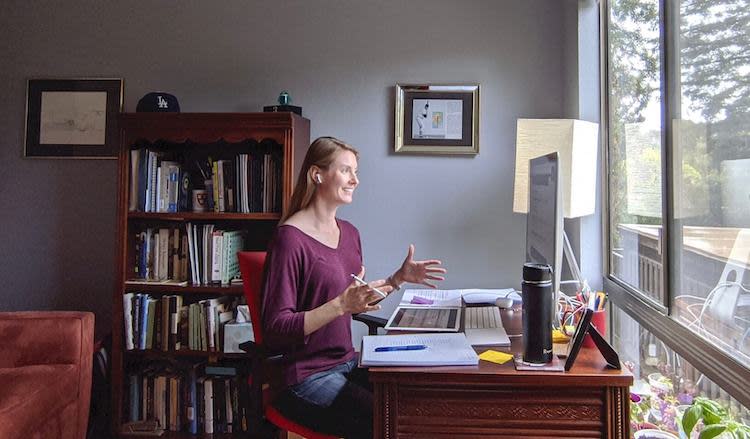