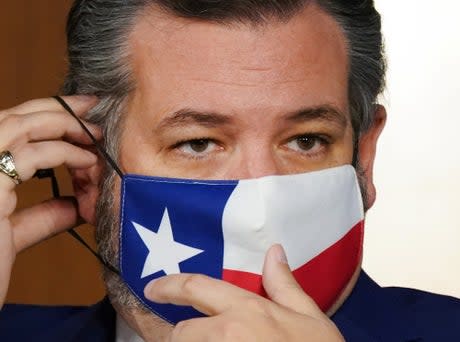 Ted Cruz was compared to Marie Antoinette for jetting to Cancun during the deadly winter storm pounding Texas and now faces calls for his resignation.

The senator from Texas flew to Mexico with his family on vacation despite millions of his constituents struggling without power and having to boil water.

“There’s a lot of heads to roll a lot of people to blame. I know what’s not helping right now is the fact that Sen. Ted Cruz is seen on a flight with his family to Cancun right now,” said John McCain’s daughter on The View talk show.

“But to like, literally flee your home state while people are freezing to death to go to Cancun is, uh, very Marie Antoinette.”

King Louis XVI and his wife, Marie Antoinette, attempted unsuccessfully to flee France in the midst of the French Revolution to avoid retribution from their people.

Now Texas Democrats have called for Mr Cruz to stand down over the incident.

“The Texas Democratic Party calls on Ted Cruz to resign or be expelled from office,” said Mr Hinojosa.

“Barring that, we will put all of the resources we have into defeating him and every Texas Republican who abandoned us in this disaster, including Governor Abbott and Lieutenant Governor Patrick, in 2022 and 2024.

“We are in a battle for the soul of our state. We must restore ethics, competence, and a government that works for the people.”

Mr Cruz’s latest controversy was sparked when a Twitter user posted pictures of a man who looked like the politician standing at an airport gate.

Now he is returning to the US on Thursday, with Houston Police confirming the senator’s office had requested help moving him through Houston International Airport when he left the day before.

That request is reportedly not unusual, as members of Congress have been advised by law enforcement to seek police assistance as they travel by air.

Republican sources confirmed that Mr Cruz had left the country on Wednesday while his home state was hammered by record-breaking winter temperatures.

“The photos speak for themselves,” the GOP source told Fox News.

Mr Cruz, who has spent the last month under fire for his role in the Capitol riots and attempt to overturn Joe Biden’s victory over Donald Trump, was destroyed by his critics for fleeing the country.

Former Texas lawmaker Beto O’Rourke attacked Mr Cruz for “vacationing in Cancun right now when people are literally freezing to death in the state that he was elected to represent and serve.”

And Mr Cruz was mauled online for his decision to flee Texas.

“Ted Cruz and wife Heidi waiting for the first flight out of freezing Texas last night, both now in sunny, warm Cancun Mexico.You get what you voted for Texas,” tweeted @AbrahamStein8.

Come on, guys, it’s not fair to say Ted Cruz flew to Cancun in the middle of a massive natural disaster.

He flew to Cancun in the middle of a massive natural disaster and a deadly global pandemic.

“People are freezing to death on the streets of Texas. Ted Cruz is in Cancun. Could he make how he feels about regular people any more obvious?” wrote @GravelInstitute.

And @ty_webb, added: “Word on the street is that a traitor to the United States of America is trying to enter the country from Mexico tonight. Arrest him immediately.”

“I guess Ted Cruz is flying back from his tone deaf Cancun vacation because he figures more of his lying hot air might help with the cold crisis in Texas,” tweeted @kayakendall.

“Ted Cruz let Trump call his wife ugly and his father a murderer, so slipping out of Texas for sunny Cancun while his constituents freeze to death is smack dab in the middle of his character,” added @tomwatson.

Ted Cruz let Trump call his wife ugly and his father a murderer, so slipping out of Texas for sunny Cancun beaches while his constituents freeze to death is smack dab in the middle of his character.

And @thenoahweeks added: “I’ve barely left the house since the pandemic began. Ted Cruz has delayed stimulus checks, acquitted the insurrectionist, spoken not a single truth to the American people, and vacationed in Cancun.”