A call center is in the works for people who can’t access online registration for coronavirus vaccine appointments, but Gov. Charlie Baker is resisting growing calls to set up a central online system.

The delay is prompting lawmakers to take action as a patchwork system continues to spur a scheduling “debacle.”

“We are asking people to have a little patience here because even as we add capacity, there are currently somewhere around a million people — plus or minus — in Massachusetts who are eligible to get vaccinated,” Baker said during a press conference in Plymouth.

“We did the math … it will take a little while,” the governor said.

But Beacon Hill lawmakers said the time for patience has passed and filed emergency legislation that would mandate a single centralized online registration system and would do away with “cumbersome” third-party websites.

“It’s a debacle,” state Sen. Eric Lesser told the Herald. “When we should be having mass vaccinations, instead we’re having mass confusion.”

Lesser, D-Longmeadow, filed the bill alongside Sens. Anne Gobi, D-Spencer, and Cindy Friedman, D-Arlington, that would create a “one-stop online sign-up” for vaccines and establish a 24/7 phone hotline in multiple languages.

By the day’s end, more than 46 senators on both sides of the aisle had signed on, indicating “bipartisan frustration” with the process so far, Lesser said.

Baker said “we agree” with lawmakers and the AARP’s calls for a hotline, adding there would be “more to come” on the details next week. But the Republican governor said there are no plans as of now to streamline the patchwork scheduling system that lawmakers called both “cumbersome” and “contradictory.”

Baker acknowledged that Wednesday was “a very frustrating day” but again on Thursday blamed the scheduling woes on demand that far outstrips supply.

The state announced it would list new availability for appointments at mass vaccination sites on Thursdays going forward, in an effort to make access more equitable.

Seven large-scale sites will be open by mid-February in addition to 165 smaller sites at pharmacies, grocery stores and community health centers.

Vaccine appointments at the four mass vaccination sites that are currently booking filled up on Thursday almost as fast as they were posted.

Gillette Stadium and Fenway Park posted 20,000 appointments, while mass vaccination sites at Springfield’s Eastfield Mall and the DoubleTree Hotel in Danvers added another 15,000. All were “fully booked” by Thursday afternoon, the state’s COVID-19 Command Center said.

State Sen. Julian Cyr, D-Truro, blamed the “major mess” partly on communication failures and partly on federal supply issues — and indicated the state should have waited to open registration until more supply was available.

“If the message is: There’s going to be some, but limited, access for Phase 2 for the next period of time, whether that is several days or several weeks, I think we better serve our constituents if we are honest about it,” Cyr said on Thursday’s Cape Cod Reopening Task Force call. “My worry is that among the public, particularly among those 65 plus, there was a perception that the vaccine would become widely available in Massachusetts.”

As of Thursday, nearly 500,000 of Massachusetts’ nearly 7 million people had received at least one dose of the two-shot treatment.

Fri Jan 29 , 2021
Early efforts to boost registrations among Dallas’ Black and Hispanic communities have yet to produce more equitable access to the COVID-19 vaccine, new data obtained by The Dallas Morning News shows. Six out of every 10 city residents who have enrolled for the shot with the Dallas County health department […] 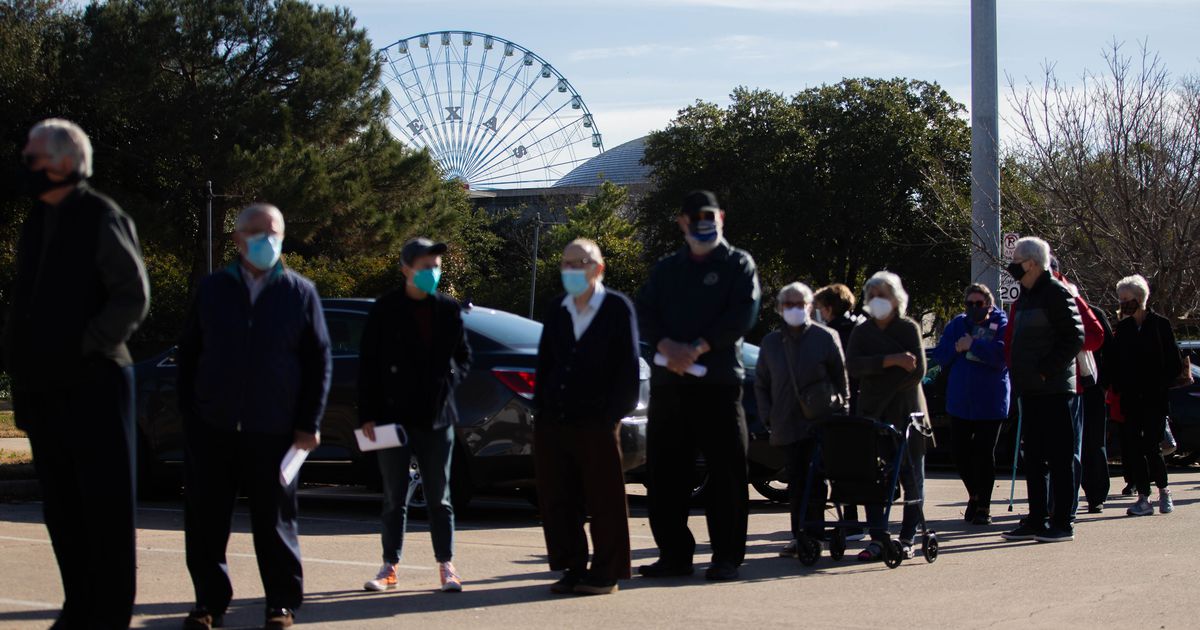