Boris Johnson ‘will not hesitate’ to get tougher 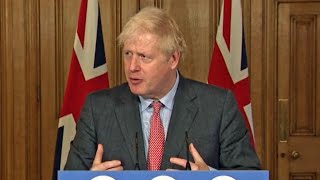 Boris Johnson ‘will not hesitate’ to get tougher

PM calls for ‘collective forbearance’ from the nation

Boris Johnson called for “collective forbearance, common sense and willingness to make sacrifices” in the battle against coronavirus, warning that tougher measures could be introduced if the evidence showed they were needed. The Prime Minister told the British people “we have to stick to it together” as he said he “profoundly disagrees” with those who think coronavirus should be just allowed to “take its course”. The 100th press conference from Downing Street since the pandemic began saw chief medical officer Professor Chris Whitty and chief scientific adviser Sir Patrick Vallence set out the data on how the virus has affected the UK. It comes as another 71 Covid-19 deaths have been recorded, taking the UK total to 42,143. Another 7,108 people have tested positive in the last 24 hours. Our liveblog has the latest and a summary of the graphs.

Meanwhile, Matt Hancock has confirmed that MPs will be given a vote before future national measures are brought in, after the Government struck an 11th-hour compromise with Conservative rebels today. This was despite the Speaker saying he could not grant a vote on the much-discussed Brady amendment to the Coronavirus Act. Sir Lindsay Hoyle accused the Government of treating Parliament with “contempt” in a sharp rebuke for using emergency powers in a “totally unsatisfactory” manner and failing to give MPs sufficient time for scrutiny. Our liveblog has the latest.

Airport testing at London Heathrow could be in place within two weeks, the Government has suggested, with flights to New York “up and running” by the end of November. The test would cost £150, to be taken upon departure with another to follow five or seven days later; effectively halving the current 14-day quarantine requirement. Read what Heathrow boss John Holland-Kaye has reportedly said. Meanwhile, Sicily could be granted a regional travel corridor allowing restriction-free trips to the Italian island to continue, with Italy at risk of being added to the UK’s quarantine list. Our travel liveblog has the latest.

Up to 200 students at Coventry University have been filmed at a rave, ignoring social distancing guidelines. The gathering shows students crammed into a common room at Arundel House, close to the main campus. The students can be seen dancing and singing whilst clambering on top of ping pong tables at the accommodation block. Coventry University has slammed the incident. Watch the rave here. Meanwhile, our latest Moral Money column sees a reader ask whether they should pay the £200 fine for their son attending a freshers’ party.

At a glance: Latest coronavirus headlines

Also in the news: Today’s other headlines

Assange extradition hearing | Julian Assange was bugged in the toilet at the Ecuadorian embassy at the request of “friends in America”, who even discussed kidnap or poisoning to bring the stalemate over the WikiLeaks founder to an end, a court heard. Read details of what was said at Mr Assange’s extradition hearing by two anonymous witnesses who had worked for a Spanish firm with a contract at the embassy.

Around the world: Hot mess of Trump vs Biden debate

There was shouting. There were insults. There were low blows, dodges and mistruths. And, over and over and over again, interruptions from the US president. But on a chaotic and combative night in Cleveland, the answer to one question remains cloudy: Did anyone watching the US presidential TV debate actually change their mind? US Editor Ben Riley-Smith details why the hot mess of a debate only gave undecided voters a headache. Fox news host Chris Wallace has come under fire for letting the event descend into chaos, triggering calls for the remaining debates to be cancelled. This is what the US media made of the bitter spectacle. The first and former second lady sent messages with their style choices without saying a word. Emily Cronin weighs up the £2,400 designer suit vs the reliable favourite. Read what Telegraph readers thought.