The U.S. death toll from the coronavirus was quietly poised to surpass 200,000 on Tuesday, less than eight months after the first American fatality.

The U.S. reached 100,000 deaths in May. Now, some experts estimate the death toll could double by year’s end.

Fatigue for social distancing and the push to get back into offices and schools could fuel new cases – and deaths – in the coming weeks and months. Experts at the Institute for Health Metrics and Evaluation at the University of Washington predict 410,000 deaths by January.

Life marches on. Hollywood is primed to make a comeback after months of filming delays, and the Centers for Disease Control has issued guidelines for relatively safe Halloween celebrations. Traditional trick-or-treating gets the thumbs-down. And a public relations staffer at the National Institutes of Health is set to “retire” after being exposed for writing articles on a conservative website that attacked Dr. Anthony Fauci, who runs the agency.

📈 Today’s numbers: Minnesota, Montana, Utah, Wisconsin, Wyoming and Puerto Rico set records for new cases in the week ending Monday. The U.S. has reported more than 6.8 million cases and 199,800 deaths, according to Johns Hopkins University data. Globally, there have been more than 31.3 million cases and 965,000 fatalities.

📰 What we’re reading: Will Las Vegas room rates rise? Will shows return to The Strip? We asked an insider.

Dr. Anthony Fauci’s appearance on Comedy Central’s “The Daily Show with Trevor Noah” on Monday night was no laughing matter. Fauci denied having any political agenda and lamented the politicization taking place over public health protocols for combating COVID-19. He also acknowledged and decried the “confused messages” coming from the Trump administration and the Centers for Disease Control and Prevention.

“What has evolved now is that people almost take sides, like wearing a mask or not is a political statement, and that’s really very unfortunate, totally unfortunate,” Fauci said. “This is a purely public health issue. It should not be one against the other.”

Many of the art exhibits, festivals and lectures planned to mark the 400th anniversary of the Mayflower’s arrival at what is now Plymouth, Massachusetts, have been delayed or canceled due to coronavirus concerns, a development historian Elizabeth Fenn finds ironic. Disease introduced by traders and settlers – either by happenstance or intention – played a significant role in the “conquest” of Native people.

“The irony obviously runs quite deep,” says Fenn, a history professor at the University of Colorado Boulder who has studied disease in Colonial America. “Novel infections did most of the dirty work of colonization.”

Pumpkin carving at home or outside at a distance from others, participating in a virtual costume contest or having a “scavenger hunt-style trick-or-treat search” at home are all considered lower risk.

Moderate risk activities include leaving grab-and-go goodie bags outside for trick-or-treaters, having a small, outdoor and socially-distant costume parade and visiting a one-way, socially-distant haunted forest with masks (greater distance is advised “if screaming will likely occur”).

The White House is urging U.S. governors to put politics aside and help the Trump administration promote future coronavirus vaccines as safe and effective.  Vice President Mike Pence urged governors Monday to use their bully pulpits and reassure the public that vaccines will be safe to take after a rigorous vetting process by the Food and Drug Administration.

“What we don’t want is people undermining confidence in the process,” Pence said in a private call with governors, the audio of which was obtained by The Associated Press.

Trump has escalated his promise for a coronavirus vaccine before Election Day. But Democrats, independents and even some Republicans do not trust the Trump administration to produce a safe and effective vaccine on such an aggressive timeline.

British Prime Minister Boris Johnson will announce new restrictions on social interaction Tuesday as the government tries to slow the spread of the coronavirus before it spirals out of control. Cabinet Office Minister Michael Gove told Sky News that pubs and restaurants across England will be ordered to close at 10 p.m. and people who can work from home will be encouraged to do so, reversing a government drive to get people back to the office.

The new restrictions come a day after the government’s top scientific and medical advisers said virus infections were doubling every seven days and could rise to 49,000 a day by mid-October if nothing is done to stem the tide.

The National Institutes of Health said a public relations staffer who had been using a pseudonym on a conservative website to discount the seriousness of the coronavirus and attack Dr. Anthony Fauci, who runs the agency, and will retire.

The Daily Beast first identified and reported that William B. Crews was also the managing editor of right-leaning website RedState where, under the fake name “streiff,” derided the government’s work against the coronavirus outbreak, calling it “massive fraud.” The articles directly contradict and demean the agency’s recommendations about COVID-19. They also trash Fauci, the nation’s leading infectious disease expert, calling him a “mask nazi,” among other insults.

Two new studies published in a scientific journal raise questions about whether transmission of the coronavirus on lengthy commercial airline flights might be more common than earlier thought. One looked at two passengers and two flight attendants on the same 15-hour flight from Boston to Hong Kong who later tested positive for COVID-19. It was found that the virus’ genetic sequence in all four was identical, which the study said “strongly suggests that the virus can be transmitted during air travel.”

The other study examined a 10-hour flight from London to Hanoi, Vietnam, in which 16 aboard were found to have the virus, 12 of whom were seated in business class within two seats or rows of the only symptomatic person. “Seating proximity was strongly associated with increased infection risk,” the study concluded.

The studies, both published in the journal Emerging Infectious Diseases, are significant because travelers have slowly been returning to the air as more has become known about how to avoid contracting COVID-19. Both involve flights that occurred in March and they don’t spell out whether passengers were wearing masks.

The NFL isn’t issuing a second round of warnings regarding the requirement for coaches to wear masks on the sideline. Seattle Seahawks coach Pete Carroll, San Francisco 49ers coach Kyle Shanahan and Denver Broncos coach Vic Fangio were all fined $100,000 each by the NFL on Monday for violating the jointly approved protocol between the league and NFL Players Association, a person familiar with the league’s decision told USA TODAY Sports. The person spoke on condition of anonymity because they were not authorized to speak about the punishment.

ESPN’s Adam Schefter was first to report the news. All three teams were also fined $250,000.

The punishment comes one week after NFL executive vice president of football operations Troy Vincent sent out a memo to all 32 teams reminding them of the mask requirement in light of the coronavirus pandemic. Anyone found in violation of the rule would subject both themselves and their teams to disciplinary measures, Vincent said.

COVID-19 survivors may need to get screened for heart damage

While COVID-19 is known as a respiratory infection, there’s emerging evidence linking it to heart damage, too. Cardiologists are seeing patients with signs of inflammation and scar formation in their hearts even after recovery from COVID-19, experts say.

For that reason, anyone who plans on participating in vigorous exercise and was sick with COVID-19 for three or more days should get a cardiac screening before working out or participating in their sport, said Dr. Steven Erickson, medical director for Banner University Sports Medicine and Concussion Specialists in Phoenix.

“You don’t get sick with COVID-19 and stay home from school for a week and the next day go back and play two hours of soccer,” Erickson said. “You’re taking a risk, and that is not what the medical community is recommending right now.”

Having assessed seriously ill COVID-19 inpatients since March, Arizona cardiologist Dr. Dawn Pedrotty said she has seen evidence linking the disease with cardiac damage. What’s not clear is what that damage will mean for patients in the long term, but researchers and physicians are closely following the link, she said.

“It’s an important public health message that it does affect more than your lungs,” Pedrotty said.

Lights, camera, action: After months of planning and negotiating, Hollywood’s unions and major studios have reached a return-to-work agreement. On Monday, The Directors Guild of America, the International Alliance of Theatrical Stage Employees, the International Brotherhood of Teamsters, the Basic Crafts unions and the Screen Actors Guild-American Federation of Television and Radio Artists jointly announced the deal reached with the Alliance of Motion Picture and Television Producers.

“The protocols pave the way for creative workers, who have been hard hit by the pandemic, to resume their crafts and livelihoods in workplaces redesigned around their health,” the unions said in a joint statement.

The CDC said Monday that it had posted in error changed guidance on how COVID-19 spreads, walking back language that acknowledged the virus can spread via “airborne particles.”

“There is growing evidence that droplets and airborne particles can remain suspended in the air and be breathed in by others, and travel distances beyond 6 feet,” the now-removed guidance said on the CDC’s website.

A note at the top of the CDC’s webpage Monday instead said that the language was a draft and the agency was still updating its guidance.

What are the new places you need to wear a face mask in England?

Tue Sep 22 , 2020
Anyone violating the law may be fined £100 (Getty) New rules on face coverings were announced by the prime minister on Tuesday, increasing the number of places in England where it is mandatory to wear a covering or face a penalty fine of £200 for a first-time offence. People were […] 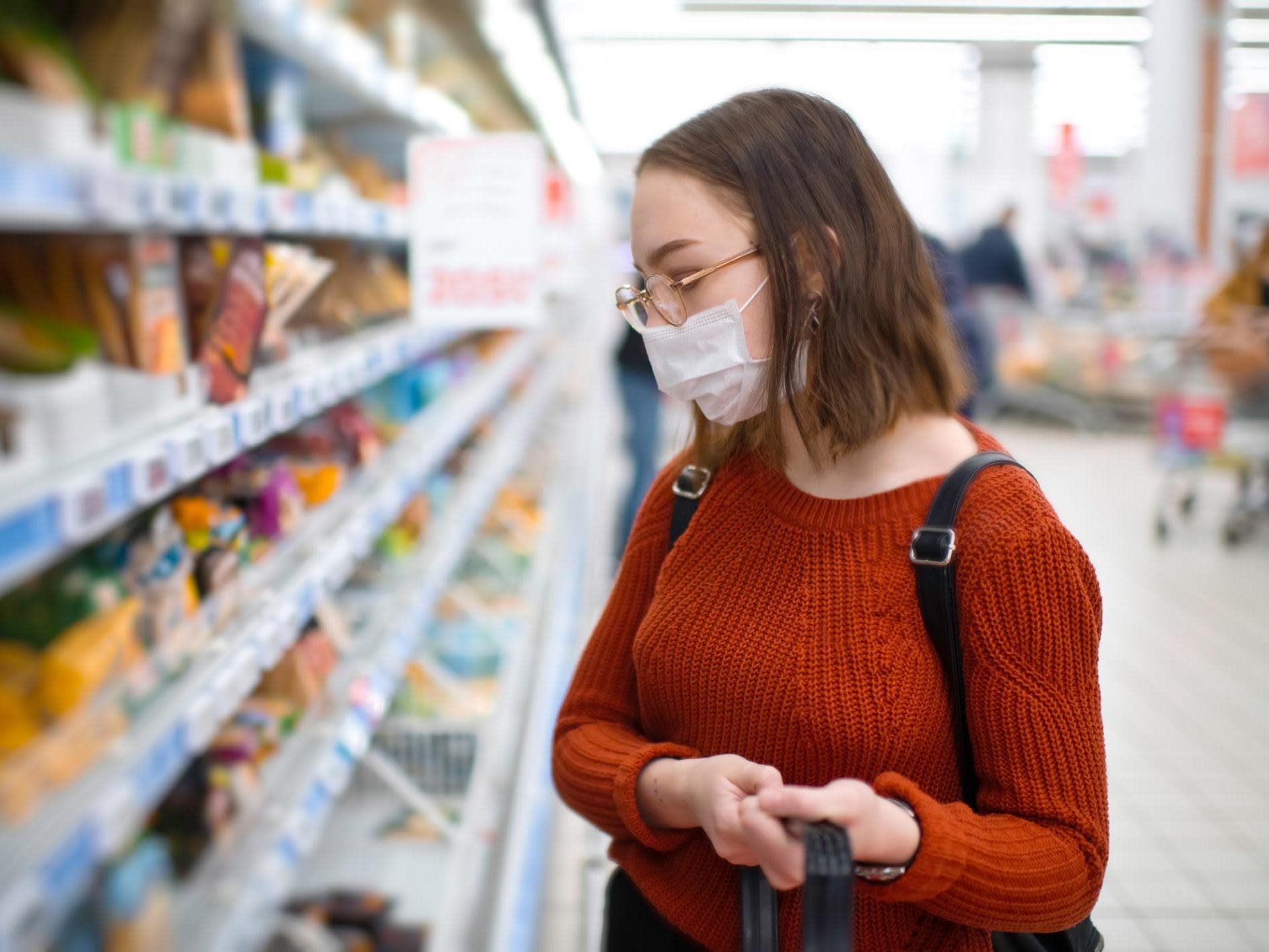