WASHINGTON — President Joe Biden announced Thursday that he will direct states to make all adults eligible for coronavirus vaccinations no later than May 1, a move that he said could help the United States return to some sense of normalcy by Independence Day.

In his address marking the anniversary of the coronavirus pandemic shutdowns, Biden offered the country a somber reflection on a year tainted by grief and devastation while providing a renewed sense of hope that a post-pandemic future is near if Americans do their part.

“Photos and videos from 2019 feel like they were taken in another era: the last vacation, the last birthday with friends, the last holiday with extended family,” Biden said, speaking from the East Room of the White House in his first prime-time address as president.

While Biden said there was a “good chance” that friends and families will be able to safely gather together in small groups to celebrate July Fourth, he cautioned that for that to happen, Americans would need to get vaccinated and continue to follow health guidelines, such as mask-wearing.

“A July Fourth with your loved ones is the goal. But with a goal, a lot can happen. Conditions can change. The scientists have made clear that things may get worse again,” he said.

Biden celebrated that his original goal of administering 100 million vaccine shots in his first 100 days in office was on track to be met by just 60 days, and he said he expected 2 million to be administered every day going forward.

Still, Biden acknowledged that vaccine hesitance among some Americans could hamper his administration’s efforts.

“We got work to do to ensure that everyone has confidence in the safety and effectiveness of the vaccine,” Biden said, urging people to talk to their family, friends and neighbors about the safety of the shots.

In addition to directing states, tribes and territories to make all adults eligible for vaccinations by May, Biden said he will double the number of pharmacies participating in the federal pharmacy program and will also double the number of federally run mass vaccination centers that his administration has been setting up in sports stadiums and convention centers around the country.

Administration officials said that the directive announced Thursday does not mean that all adults will be vaccinated by May, as it will still take time to get shots in arms. The White House has also said that it does not expect to have enough supply to vaccinate every adult until the end of May.

Biden said that to speed the vaccination process, the administration will also work to address the demand for vaccinators by expanding the pool of qualified people to administer shots to include dentists, veterinarians, medical students and other health care professionals.

Biden acknowledged that some people had been having difficulty navigating online resources to schedule vaccination appointments and said the administration will launch a vaccination website that will show people locations near them that have vaccines. The White House also said that it would establish a 1-800 number with vaccination information to help those without reliable internet access and that it would offer technical support to help boost states’ online systems for scheduling appointments.

An administration official said Biden personally worked on his speech along with chief of staff Ron Klain, senior adviser Mike Donilon, Vinay Reddy, the director of speechwriting, and members of the White House coronavirus response team to strike a “somber” tone to mark the one-year milestone, while also showing that “there is light.”

Biden spoke after he signed into law a $1.9 trillion Covid-19 relief package that will deliver $1,400 stimulus payments to millions of Americans, extend enhanced unemployment benefits and boost funding to ramp up vaccine distribution and reopen schools.

The White House said some people could begin to receive direct payments as soon as this weekend.

Biden dedicated little time in his nearly 25-minute speech to promoting the bill, which was unanimously opposed by Republicans in Congress. The White House instead planned to hold a more formal event marking the bill signing from the White House Rose Garden on Friday that is expected to include members of Congress.

The White House is also planning a victory lap tour to mark the achievement, with Biden, first lady Jill Biden and Vice President Kamala Harris hitting the road next week.

Fri Mar 12 , 2021
If you’ve felt a recent urge to unleash your inner Viking, you’re not alone: millions of people have been riding the waves, swigging mead and slaying the enemy in a craze for the video game “Valheim”. Designed by a tiny Swedish games studio, “Valheim” has proved an unexpected smash-hit, selling […] 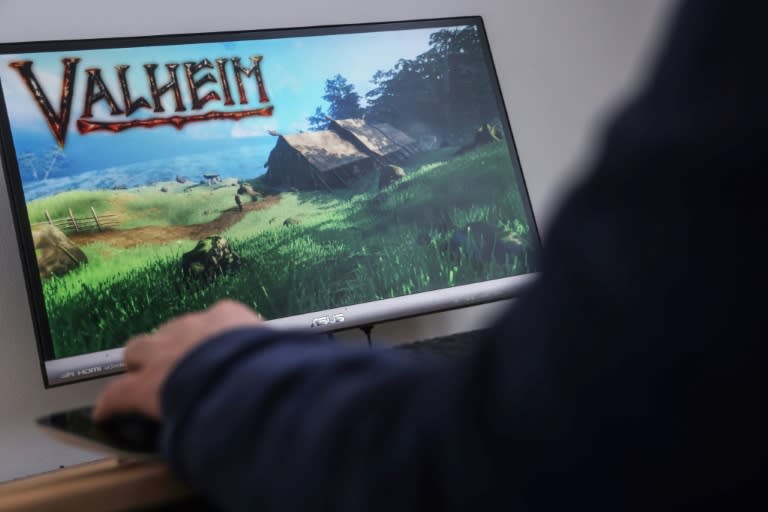