Roosevelt Park Pool was nearly empty, just as Josie Bethea and Trenelle Cornish had hoped, when they tried to bring a group of kids to swim in the middle of a sweltering heat wave on July 19.

But despite only a few people in the water, the women said, they were told the pool was full for the day. The 50 free reservations available online or by phone for each 90-minute swim session had been snapped up.

“It was booked up, but there was just no one in the pool,” said Bethea, a 28-year-old Baltimore teacher. “If you’re not registered, basically, you can’t come in. Even though 50 people registered, 48 of them didn’t show up.”

Because of the coronavirus, Baltimore didn’t open its pools until mid-July. Now, swimmers are greeted by temperature checks, a health waiver and questionnaire, masked lifeguards, pool cleanings every hour, and spray-painted markers to encourage social distancing.

But no change — even the dropping of admission fees — has made more of a splash than the new registration process, which opens each Monday for the following week.

Reservations are required this year to prevent crowding and “to help with contact tracing, should there be any type of exposure or anything,” said Karen Jordan, deputy director of the Baltimore City Department of Recreation & Parks.

Baltimore isn’t the only place to enact safety restrictions at public swimming pools. Some counties, such as Baltimore and Howard, have reopened pools with significant physical distancing and sanitation measures.

And the Maryland Department of Health has published guidance stating that outdoor swimming pools should calculate the maximum capacity as the surface area of the pool divided by 36.

Demand has been high, and most of the city’s park and neighborhood pools are registered to capacity a week in advance, Jordan said.

She acknowledged that officials are working out kinks in the new system, including “some spots where people [with reservations] are not showing up.”

“We do ask that residents, if they cannot make their spot, that they cancel their reservations so it opens that spot up for other residents,” Jordan said.

Those who cannot access the system online or who need help may call 410-396-3841 to make or cancel a reservation. The line is staffed from 10 a.m. until 3 p.m. Monday through Friday, Jordan said.

With locker rooms closed, swimmers are reminded to wear their bathing suits to the pool. People over age 21 can avoid some of the crowd in the registration process by purchasing a $40 membership for special time slots at Clifton Park Pool or Patterson Park Pool.

A pool attendant guided Bethea and Cornish through the new online system on July 19, and they called and invited Brittany Crooks and her kids to join them when they returned Thursday to Hampden’s Roosevelt Park Pool with the children.

The group sat in shade and on grass outside the entrance and sipped Capri Sun juice pouches and Sunkist orange soda as their swim time approached. At 3 p.m., the kids gathered their flip-flops, masks, pool floaties and other items and checked in near a large “NO MASK, NO ENTRY” sign at the gate.

Cornish’s children, Journee Shaw, 2, Jessie Shaw, 5, and Treyaon Cornish, 12, were ready to get out of their Union Avenue house after a long lockdown, she said. Once they’d all had their temperatures taken, they wasted no time getting into the water.

Crooks, 29, who lives in Greenmount, held her 2-year-old daughter, Carly, in the wading pool while her other children, Cree Brown, 3, and Brayden Slowe, 8, played nearby.

Wilson, 37, brought her son, Gabriel Walker, and daughter, Abigail Robinson, to Roosevelt Park from their home in Park Heights on Thursday. As Gabriel plodded up and down the wading pool’s steps in his Crocs, his mother reminded him of one of the new pool rules.

“Do you want to put your mask on?” Wilson asked. “Then you have to stay in the water.”

Thursday’s outing was Wilson’s first time using the pool registration system, too. She considered going to C.C. Jackson, the neighborhood pool closest to their home, but the larger park pools have a higher capacity, even with the restrictions to stop the spread of COVID-19.

The mask requirement, temperature checks and other precautions made for a far different pool day than normal, Wilson said.

“It’s crazy, for real,” Wilson said. “But I can appreciate the fact that they’re being safe.”

Rayshawn Jones Jr., 3, splashed around the wading pool with a broad smile alongside his parents, Ayana Cunningham and Rayshawn Jones Sr., of Parkville.

Cunningham said she initially didn’t know about the new registration process, which she said “made it harder for us to get in here” and “wasn’t very convenient.”

Staying 6 feet from others at all times in the pool was challenging at times, and some of the other changes to the normal pool atmosphere were jarring, she said.

Visit The Baltimore Sun at www.baltimoresun.com

We need to build back trust, Spain says after UK quarantine blow

Mon Jul 27 , 2020
By Emma Pinedo and Nathan Allen MADRID (Reuters) – Spain said on Monday it hoped to convince Britain to exempt the Balearic and Canary islands from a sudden quarantine, and other Spanish regions said they also felt unfairly penalised by the sweeping British move. Britain on Saturday shocked Madrid, and […] 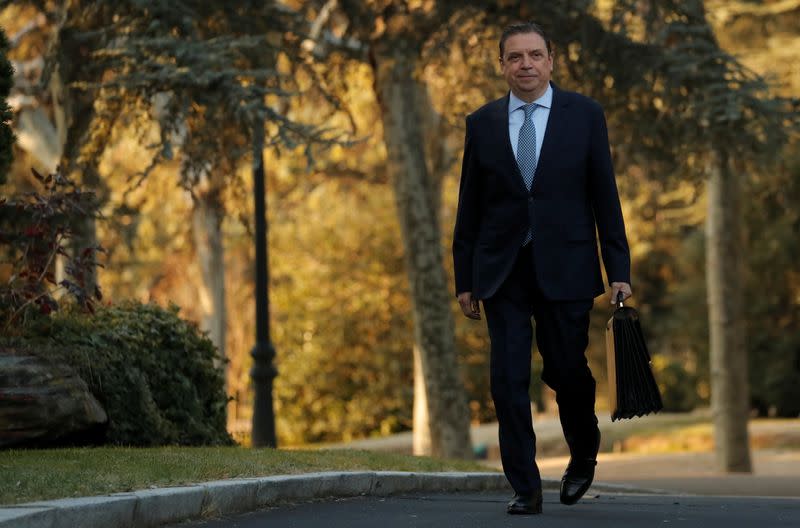