ORANGE HILL, Jamaica (AP) — Residents of this small town in the farming country of northern Jamaica watched elated Wednesday night as Kamala Harris, daughter of one of the many Orange Hill residents who emigrated to the U.S., accepted the Democratic nomination for vice president.

“This is a proud moment for us as knowing that she is family. She’s making history!”‘ said Harris’ cousin Newton Harris, a 29-year-old legal consultant in the office of the Attorney General of Jamaica.

“As long as she remains the faithful servant of those who need her advocacy the most, she’ll go far and history will be kind to her,” said Newton Harris, who was watching the Democratic National Convention online at home.

Economist Donald Harris was raised in Orange Hill and emigrated to the United States, where he married Indian immigrant Shyamala Gopalan and had two daughters. His close relationship with Kamala and her sister ended with his divorce from their mother in 1972, according to father and daughter, but Kamala continued to travel to Jamaica as a young woman.

Accepting the vice presidential nomination Wednesday night, she spoke at length about her mother but mentioned her father and Jamaica only briefly. Nonetheless, her relatives in Orange Hill said they clearly saw the influence of the Harris family on the first Black woman named to a major U.S. party presidential ticket. Former Vice President Joe Biden chose Harris as his running mate last week.

Known for their roles in business and politics, the Harrises count among their ranks the candidate’s great-grandmother Christiana Brown, owner of a popular dry goods store. Her great-aunt Thelma Harris served as a town councilor for the Jamaican Labor Party in the 1970s, when it was relatively rare for women to be in politics in Jamaica, family members told The Associated Press. Other relatives have also held local positions for the JLP, one of Jamaica’s two major parties, in St. Ann’s Parish, the district encompassing Orange Hill and the nearby market center, Brown’s Town, where Christiana Brown ran her store.

After following her career for years, the extended Harris family in Jamaica was elated at their relative’s rise to a historic nomination.

“Her speech was brilliant,” said cousin Maxine Cross, a 65-year-old property manager. “Loved it! We are so proud of Kamala.”

In South Florida, members of the 300,000-strong Jamaican-American community celebrated just as hard when Harris was chosen as Biden’s running mate, saying she will make it easier for Democrats to mobilize voters in a must-win state for President Donald Trump.

“The enthusiasm level is through the roof. People are extremely excited,” said Dale Holness, the Jamaican-born Democratic mayor of Broward County, home to the largest Jamaican community in South Florida. “They are overjoyed to realize that a daughter of immigrants could be placed in a position where she would be the second in command.”

Mark Douglas, a commissioner for the city of Sunrise, who immigrated to South Florida from Jamaica in his 20s, said that voters from other Caribbean nations such as Trinidad and Tobago, Haiti and the Bahamas may also feel more inclined to vote for Biden now that Harris is on the ticket. “We usually root for each other,” he said.

Donald Harris is an economist who is a professor emeritus at Stanford University. Through a Stanford spokeswoman, he declined to answer questions about his daughter’s Jamaican ancestry.

“I know Donald, but I didn’t know any of his daughters,” the nominee’s cousin Karen Harris said in an interview in St. Ann’s Parish. “‘We are still very proud of her.”

Like Donald Harris, many of the sons and daughters of Orange Hill seek better lives in the United States. Kamala Harris’ nomination has given them new hope for their own success.

“The Harris are hardworking people. So this lady now, when I heard about it, I laugh and rejoice,” said Vita Stevenson, a 75-year-old store owner in Orange Hill who is not related to the Harrises. “I have a daughter there who gives me information about everything going on in America. … I am praying for (Kamala’s) victory.”

Thu Aug 20 , 2020
Strict coronavirus measures appear to be taking their toll on Chinese Super League footballers, with one saying his head was “spinning” in the claustrophobic “bubble” — and they still have six weeks to go. Chinese football introduced harsh rules when it launched the CSL season in two bio-secure bubbles after […] 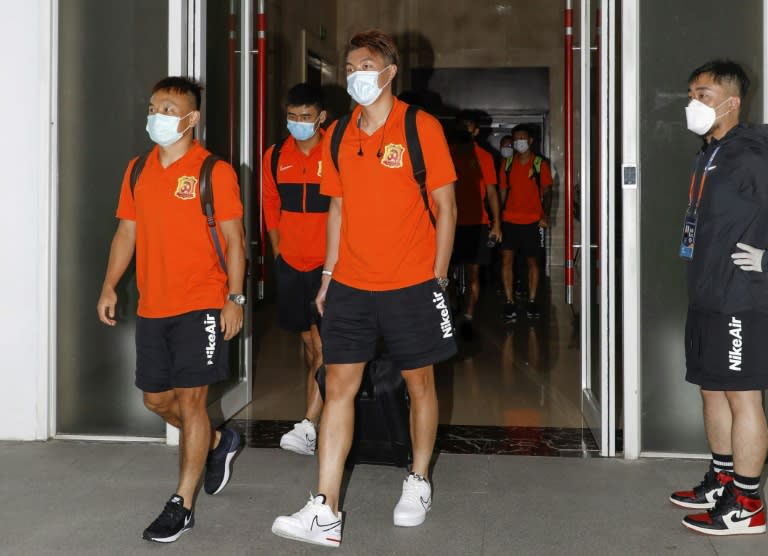