Yahoo Life partnered with Emmy- and Peabody Award-winning broadcaster Soledad O’Brien with the exclusive digital premiere of the documentary Outbreak: The First Response. O’Brien and her film crew were at ground zero of the pandemic in Seattle earlier this year, and they captured dramatic, heart-wrenching footage and personal stories showing the virus’s toll on at-risk communities, notably the homeless population and the residents of the Life Care Center nursing home in Kirkland, Wash., which was devastated by the outbreak. The documentary is an important chronicle of the toll of the COVID-19 pandemic on America’s most vulnerable from the earliest stages. In the article below, O’Brien reports on the most recent threat brought on by the pandemic: millions of Americans who face homelessness as eviction moratoriums expire around the country.

When Seattle became the first community in the U.S. to grapple with COVID-19, the city faced a daunting challenge. How would it care for the thousands of homeless people living on its streets and in its shelters? In my documentary Outbreak: The First Response (watch above), my producers and I chronicled the public health response to the pandemic in a city with one of the largest homeless populations in the country. Now, COVID-19 may force every community to answer that question, as millions of people face eviction and the possibility of joining the ranks of the nation’s homeless.

Darlene Turner has been living in her Bronx, N.Y., apartment for 34 years, never failing to pay her monthly rent, now $1,022, thanks to a solid job at the Marriott Marquis hotel’s restaurant in Times Square — until now. COVID-19 shut down her hotel and took her job on March 16. Now, after months without income, she faces the latest threat the COVID-19 pandemic has visited on millions of Americans: eviction.

“Before COVID-19 ever happened, nearly half of all renters were spending more than half of their income on rent. So we had a housing crisis and COVID was an accelerant. It was like throwing gasoline on a fire,” says Brian Castrucci, CEO of the de Beaumont Foundation, which focuses on public health and funded the documentary. “It would create a homeless crisis that is unprecedented in our country.”

For people living on the brink, July was the cruelest month and August looks to be even worse. The moratorium on evictions from federally financed housing — about 30 percent of all renters — expired on July 25. The Eviction Lab at Princeton University estimates that more than 20 state moratoriums have also expired since May. The $600 a week unemployment benefit also expired at the end of July.

“This is how homelessness starts and [we are] making those connections between eviction prevention and rental assistance to crime and homelessness and to social determinants of health that will rapidly, rapidly decline,” says Clare Rutz Wallace, executive director of the South Louisville Community Ministries, which provides direct financial assistance, food and supportive programming to low-income and housing-insecure Louisville, Ky., residents. “And then it needs to be said that the family shelters have a waiting list.” Louisville resumed eviction proceedings on Aug. 1. Compared to July 2019, South Louisville Community Ministries had already encountered a 120-150 percent increase in requests for rental assistance in July 2020, says Wallace.

Seattle, where the documentary is based, has the third-highest number of homeless people in the country, so the threat of mass evictions looms large. There, it’s largely job loss that’s driving evictions. About 82 percent of households that failed to pay rent in July had at least one household member who had experienced a loss of employment. A 2018 Seattle Women’s Commission survey found that when tenants are evicted, 37.5 percent find themselves living on the street, 25 percent move to a shelter or transitional housing and 25 percent move in with someone else.

“It could be such a huge wave of new people experiencing homelessness that the system we have in place right now is wholly inadequate to respond,” says Rachel Myers, executive director of the Washington Low Income Housing Alliance, an advocacy organization that develops policies aimed at eradicating Washington state’s housing shortage and homelessness crisis.

The state is moving quickly to prevent its population of roughly 12,000 homeless people from growing. Washington Gov. Jay Inslee recently extended its statewide eviction moratorium to Oct. 15. Seattle has a winter eviction ban, a new ordinance that bars landlords from evicting low- and moderate-income tenants for issues like unpaid rent during the coldest time of the year. And, recently, the state moved $100 million from the CARES Act for rental assistance, which will be sent to community agencies to distribute locally.

Mike Fulop, a Seattle resident who used to be a freelance agent representing actors, is $15,000 to $16,000 behind in rent payments and urgently in need of medical care. “I didn’t want to be a deadbeat. I’ve been living here for nine years, and for eight years I was never late with rent,” says Fulop, who is getting help from a variety of local groups. “Luckily, I guess, Washington state is a progressive state and I was able to look online and that’s how I got in touch with different pro-bono organizations.”

Things are worse in New Orleans, where the tourist industry took a dive with the onset of COVID-19. “Fifty percent of all Louisiana renters are at risk of eviction. This is an issue that transcends Orleans Parish, which transcends sort of racist and classist notions about who is in eviction court and why,” says Breonne DeDecker, program director of the Jane Place Neighborhood Sustainability Initiative, a community land trust and housing rights organization based in New Orleans’s Mid-City neighborhood. “The state did release $24 million in housing assistance. They said they aimed to help 10,000 households across Louisiana with that number, with that fund. It was overwhelmed after three days of application,” she says.

The double whammy of lifting moratoriums and lowering benefits is not likely to be addressed by the federal government — at least not right away. The two political parties and the White House came to loggerheads recently about overextending the $600 weekly unemployment payouts. The benefit ran out. While the president signed an executive order that asks states to foot $100 extra unemployment money per week while the federal government chips in another $300 for a total of $400, it’s unclear whether or when that money will actually get into people’s hands.

Rep. Nydia Velazquez represents a district in New York with a median household income of $60,000 but is one of the most expensive housing markets in the country. She believes the dip in benefits and lack of protections will hamper the economic recovery, when and if it comes. “Millions of Americans depend on this benefit to pay groceries, utilities, rent and other bills,” she says. “Reducing it as the president’s Executive Order would do, would make it harder for families already suffering. Moreover, cutting this assistance means struggling families will further scale back on expenditures, delaying our economic recovery.”

The states are in no shape to help their residents either. Louisville, for example, will receive up to $24 million from the CARES Act and FEMA for direct rental assistance, with an additional $10 million from the Department of Housing and Urban Development. The city of Louisville already spent the money helping people with rent, mortgage and utility payments. However, to stop the evictions to come, the city would need a total of $100 million.

Renters were not in great shape even before the COVID-19 crisis. According to the Aspen Institute, “the majority of renter households below the poverty line spent at least half of their income towards rent in 2018, with one in four spending over 70 percent of their income toward housing costs.” Then there is the issue of foreclosures. Emily Benfer, the chair of the American Bar Association’s Task Force Committee on Eviction and co-creator of the COVID-19 Housing Policy Scorecard with the Eviction Lab at Princeton University, estimates that during the Great Recession of 2008, roughly 10 million people were displaced from their homes due to foreclosures. It’s too soon to tell what foreclosure rates will look like this time.

Matt Desmond, principal investigator at the Eviction Lab and author of the Pulitzer Prize-winning book Evicted: Poverty and Profit in the American City, says seven evictions were filed every minute in this country even before COVID-19. “Medium rent has doubled over the last 20 years but income certainly hasn’t,” he says. He adds that in most states, people facing eviction are not even guaranteed legal representation, making it hard to fend off landlords seeking to kick them out.

“Right now with Legal Aid and StopMyEviction.org, and case officers and other nonprofit organizations all together we probably have 30 people, maybe [to represent people facing eviction],” says Wallace. “And 30 people to do the mediation of 75 cases a day might sound feasible, but those 30 people are also trying to coordinate assistance, et cetera.”

Whatever aid the federal government or states may eventually provide, it may not come in time for renters like Turner. By July, Turner was four months behind on her rent, about $4,000. On top of that, she has her utilities, credit cards and phone bills. She is even short of money for food. She says her employer “sent a letter that says they’re looking to maybe open back the hotel like Oct. 2. Maybe.” She estimates it would take her about three months of full salary to save enough to pay just the back rent. Her landlord calls her every month and plans to take her to court as soon as New York state’s moratorium ends in October. The Bureau of Labor Statistics reported that 16.3 million Americans are unemployed as of Aug. 7, which is equivalent to roughly 10.2 percent of the population.

New York’s moratorium expires this fall, and Turner says she will not have the money to pay her rent. “I’ve never been in a shelter before. I’ve always been at this residence here in the Bronx,” says Turner, who has never been unemployed in her life. “It’s very emotional because I hear so many things from other people, you know, on television, and whatnot, about being evicted and having to sleep on a street.”

For the latest coronavirus news and updates, follow along at https://news.yahoo.com/coronavirus. According to experts, people over 60 and those who are immunocompromised continue to be the most at risk. If you have questions, please reference the CDC’s and WHO’s resource guides.

Wed Aug 19 , 2020
It looks increasingly unlikely that Stanford GSB will have any in-person element to their MBA classes this quarter. Andrew Brodhead – Stanford News “As of now, Santa Clara County continues to be on California’s Watch List, which prohibits indoor lectures,” reads an August 17 message sent to second-year students that […] 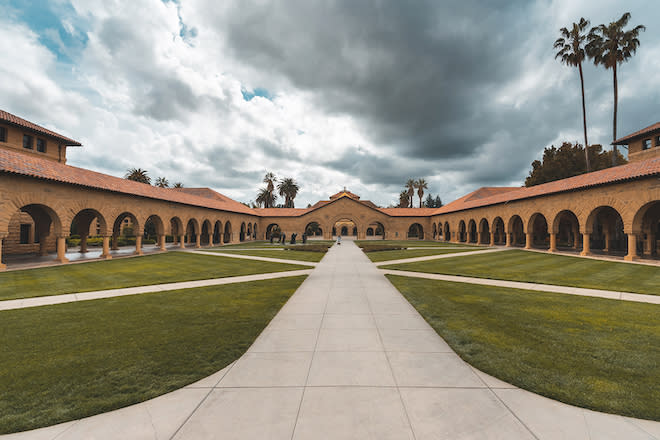