I was having what you could call an evolutionary moment. As I drifted along on a steady current off a south-facing beach on tiny Dayan island, my eyes were being assailed by the dazzling variety of nature.

Halfway into a 10-day pre-pandemic cruise, I could now identify many of the fish: the beautiful angels, damsels and demoiselles, the colourful clownfish bobbing inside anemones, the multihued parrotfish. I even knew some of the squirts and whips, brains and mushrooms that make up the weird, wonderful world of the coral reef.

But I was in no state to worry about names. Letting the rest of my fellow snorkellers swim ahead, I took in the drama, slowly, serenely, silently – happy simply to admire the “infinitely varied forms of animal life”, as the celebrated 19th-century naturalist put it.

No, not that naturalist. I am quoting not Charles Darwin but Alfred Russel Wallace, the Welsh-born scientist who shared the honours, if not the global fame, of announcing the theory of evolution by natural selection, and whose specimens – collected for the British Museum – would introduce the western world to the Malay Archipelago. He stayed eight years, from 1854-62, and returned to England with an extraordinary body of material, dozens of new species named and described, a fully formed theory of speciation, an impressive suntan and a few tropical diseases.

Dayan is in Raja Ampat, the most easterly island group of Indonesia, and this cruise was following loosely in Wallace’s wake. Great frigatebirds wheeled overhead as we sailed out of our embarkation port in Sorong, West Papua. Birds would be a focus of the trip. After all, Wallace saw five birds of paradise during his visit and there was a chance we would observe as many in less than a fortnight.

Sorong had struck Wallace with its extreme remoteness. Only absorbed into the young nation of Indonesia in the 1960s, it is still an exotic outpost for travellers, a sort of neither-here-nor-there place that hasn’t pushed itself on to the popular radar. It is, though, famous among divers and is often cited as possessing the planet’s richest marine biodiversity.

The region also possesses a deep history, and was once part of a powerful sultanate that controlled the global spice trade; Raja Ampat translates as “Four Kings”, in reference to the potentates who ruled over the main land masses – Waigeo, Batanta, Salawati and Misool – as well as hundreds of smaller islands.

The islands of eastern Indonesia are low-lying. When you cruise past at any distance inshore, they look unprepossessing. The fact that most are covered in a good amount of jungle is reassuring in a region under all manner of ecological stresses, and hints at how relatively few people live here compared with, say, Java or Sumatra. Commerce and power, education and culture are concentrated in the large islands. The east of Indonesia is largely forgotten by development, most islands still being home to humble fishermen and fruit and cassava farmers. Get a little closer, however, and some of the shorelines are startlingly beautiful.

A late afternoon cruise in a Rib (rigid inflatable boat) around Kabui Bay took us into inlets lined by karst buttes and pyramids, the limestone sculpted into dramatic forms by monsoon, wind, time and tide. Here I think I spotted a dugong. A large head popped up twice out of the still waters as if spying on us. It might have been a turtle, of course, as I saw several of those while snorkelling.

The south coast of Misool, the most southerly and loneliest of the four main islands, was similarly arresting. A winding staircase had been built on one tall island, so we could get a bird’s perspective on the studs of limestone islands, ringed by shallow turquoise seas and strips of white sand unsullied by flip-flop or lilo since Wallace’s time. Snorkelling excursions revealed the most lurid coral clinging to the bases of the islets.

I was on board the Ombak Putih, a rather luxurious update of the traditional pinisi used across Indonesia to freight timber and other cargoes during the 20th century. A hybrid of older ships, with elements of the Western schooner, East Indiaman and native gipsy vessels, it is still considered the most versatile means of navigating around Indonesia’s 17,000-odd equatorial islands. Equipped with sails, which were hoisted on our very first day at sea, the tourism-adapted ships generally motor around the islands. With just 12 cabins and a dozen cooks and other staff for as many passengers, a pinisi guarantees a cruise unlike any other.

My co-voyagers were a well travelled bunch from Britain, the United States and Switzerland. Dr George Beccaloni, one of the leading British experts on Alfred Russel Wallace and director of a project to collate and publish his expansive correspondence, was on board as lecturer. Most evenings he linked the marine and birdlife, geology and topography we had explored that day with Wallace’s accounts, usually finding an opportunity to make a little dig at Wallace’s better-known rival.

“What drew me to Wallace is that he was the co-discoverer of what has been called the greatest idea that ever occurred to the human mind – and yet Darwin gets all the credit. As a scientist I hate inaccuracies. His single-mindedness in pursuing his interest in natural selection is also something I admire.”

Wallace discovered the continental division between the animal and plant species of Asia and Australia, known as the Wallace Line. This in turn informed his ideas about species evolving across space as well as time. He is known as the “father of biogeography” and scientists call the liminal zone – through which we were sailing – Wallacea. His version of natural selection, which stressed the role of location over Darwin’s emphasis on competition, is widely accepted as the more accurate. Wallace was also one of the greatest collectors – of bugs, birds, mammals and moths – of the Victorian era. He was, Dr Beccaloni insisted, also a much better writer.

We had our best sightings of birds of paradise close to shore from dinghies or on short hikes early in the morning. While we clocked up only four of the heaven-sent birds, other stunning species were ticked off along the way, including Blyth’s hornbill, palm cockatoo, collared kingfisher, imperial pigeon and osprey. It was a busy cruise, with lots of other stops, side-trips and excursions.

High points came thick and fast, such that we barely had time to process them before we were preparing for another adventure. Swimming with huge manta rays, which looped the loop and showed no fear of us, spotting white and black-tipped reef sharks scything through the water a few feet away, marvelling at giant coconut crabs, rising in the middle of the night to set off on long boat rides and sweaty hikes to see birds of paradise: these were veritable “Wallacean” moments, little epiphanies for anyone who is moved by nature’s creations.

Downtime for me mainly involved reading Wallace’s The Malay Archipelago and enjoying the pungent delights of Indonesian cuisine. We were far from phone masts and Wi-Fi for most of the trip, and we rarely saw any other ships. But we did see dolphins, frigatebirds and whales spouting. Tourism is young in eastern Indonesia, though the Chinese are beginning to arrive. For now, the abundance is mainly nonhuman.

As befits a kingdom of islands scattered like peppercorns on the calm seas that connect the Indian and Pacific oceans, nature often teemed – whether in the shape of tiny hermit crabs on a beach, pulsating peach-hued jellyfish in a lake, massive fruit bats swooping in a narrow cave, or tiny fish scattering like silver spray at the edge of a mangrove swamp. It was the multitudinous character of the natural world that inspired and instructed Alfred Russel Wallace, too.

His most memorable remark is at once a declaration of wonder and a note of warning. “Should civilised man ever reach these distant lands, and bring moral, intellectual, and physical light into the recesses of these virgin forests, we may be sure that he will so disturb the nicely balanced relations of organic and inorganic nature as to cause the disappearance, and finally the extinction, of these very beings whose wonderful structure and beauty he alone is fitted to appreciate and enjoy.”

Let us hope, on this one occasion, that the great visionary was at least half wrong.

Chris Moss travelled to Indonesia before the coronavirus outbreak. Overseas holidays are currently not allowed.

The Telegraph website is celebrating its 26th birthday and offering readers a special subscriber offer. If you sign up today, you will pay just £1 per week for your first six months. Take advantage of the offer here.

Pandemic Life Is Taking A Toll On Dads Too : NPR

Wed Nov 11 , 2020
Will Station, a vice president at Boeing (second from left) plays with his children, Taylor (left) and Jaden, and his wife April, near their home in Newcastle, Wash. During the pandemic, Station has not traveled for work, so he’s spent a lot more time at home with his family. Jovelle […] 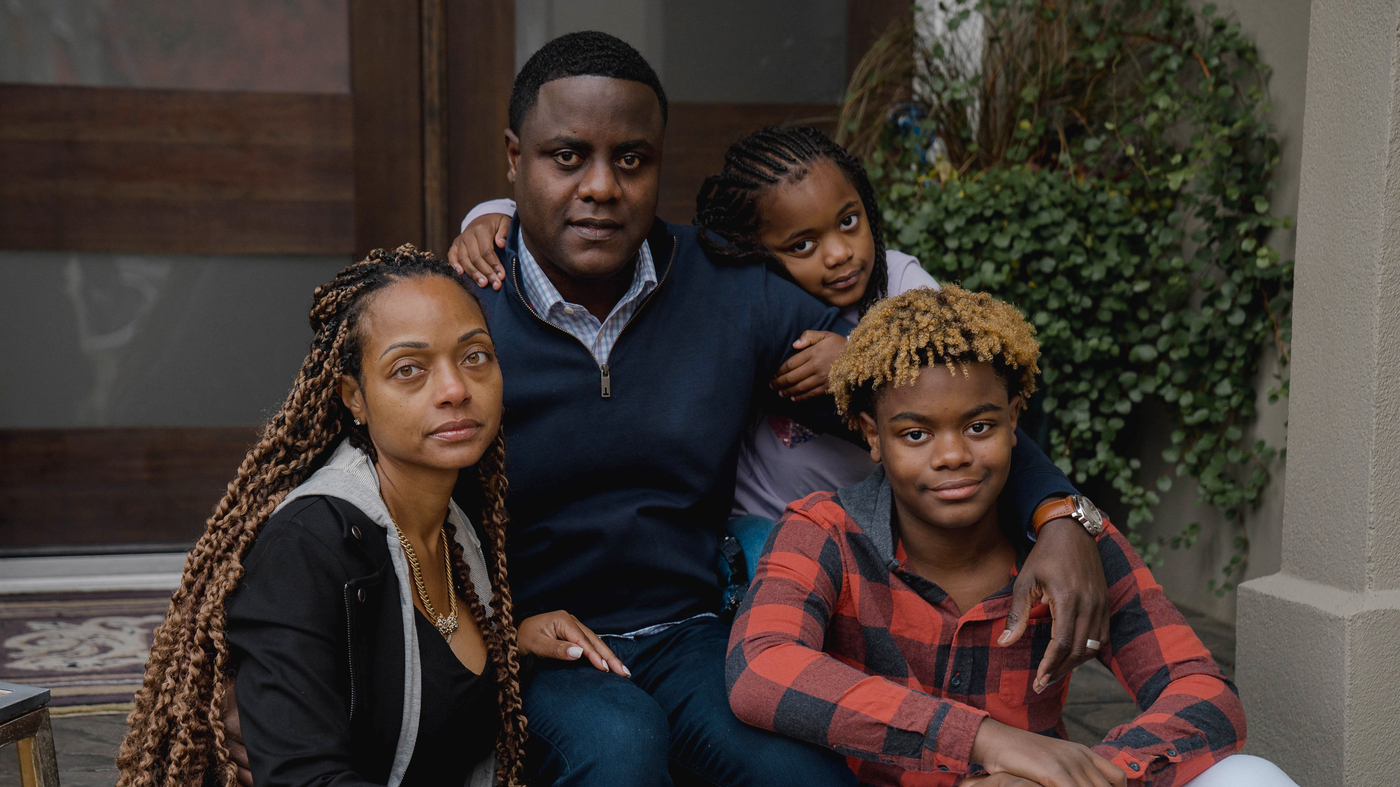