All the best movies we saw at Toronto Film Festival, ranked (including ‘Concrete Cowboy’) 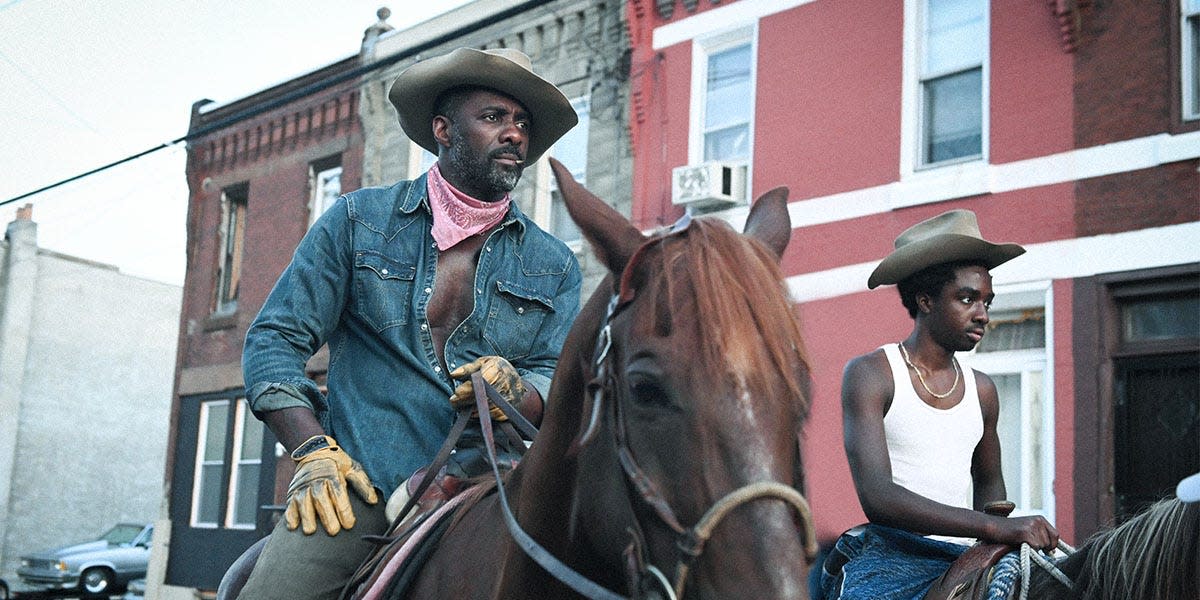 All the best movies we saw at Toronto Film Festival, ranked (including ‘Concrete Cowboy’)

It’s definitely a different Toronto International Film Festival than usual, with a couch and a Keurig taking the place of theater seats and a coffeehouse stop.

In a year when everything in the movie industry has had to scramble amid COVID-19, Toronto (running through Sept. 19) is the biggest of the A-list film festivals to go virtual, with a reduced slate of movies for an event that’s considered one of the biggest kickoffs for Oscar season. Still, you can’t ignore its cache, even in a very strange 2020: The last five best-picture winners all played Toronto, so it might be the place that (at least virtually) launches, say, Chloe Zhao’s road drama “Nomadland” (starring Frances McDormand) or Francis Lee’s lesbian romance “Ammonite” (with Kate Winslet and Saoirse Ronan) into Academy Awards consideration.

Save a seat for Frances McDormand: New drama ‘Nomadland’ is Oscar-ready

‘Penguin Bloom’: Naomi Watts was ‘the most nervous’ acting with birds

Like last year but with way more WiFi involved, we’re going to be keeping readers up to date with reaction to all the major films and hidden gems we’re seeing. (And, yep, because we love to rank things, we’re doing that, too.)

Watching only the first and fourth parts of a six-hour HBO horror/mystery miniseries is indeed a puzzling endeavor. What “The Third Day,” premiering at the fest before dropping on HBO Sept. 14, does do well is tease creepy atmospherics and an island that plays like the British version of that “Midsommar” nightmare locale. Sam (Jude Law) saves a suicidal girl and takes her back to her island home, where a weird summer festival is going on, while Helen (Naomie Harris) takes a trip there with her daughters but has come for other reasons than a vacation. With an online theatrical element planned as well, “Third Day” at least offers a decent start to a high-concept fright fest.

Executive produced by Paul Feig and written and directed by former Marine Nicole Riegel, the bleak working-class narrative showcases elements of crime thriller and coming-of-age drama. Jessica Barden impresses as Ruth, a smart teen girl who tries to raise enough money to go to college – and escape her Southern Ohio hometown – by joining a sketchy scrapyard crew with her older brother (Gus Halper). With their mom (Pamela Adlon) in jail, they steal metal from shut-down factories and plants by night. and when the situation becomes dangerous, Ruth has to weigh a potentially bright future vs. staying put with her family.

Do you appreciate pro wrestling, oddball romances, zombie apocalypses, “Three Stooges” slapstick, kung fu flicks, and just buckets and buckets of blood? Well, throw that all in a blender and hit the “wacky” button for this Taiwanese horror comedy. Kicked out of parliament because of her two-fisted political style, Hsiung (Megan Lai) wants to stop a toxic plant from overrunning her home and enlists lovesick security guard Wang (Bruce Ho) to be her dude on the inside. A rabies virus gets loose in the government building, turning victims into the red-eyed undead, so our heroes have to fight their way out in a situation that proudly grows exponentially more ridiculous by the minute.

Unfortunately, the all-star teamup of Winslet and Ronan as 19th-century lovers is a lush slog that’s often hard to dig. Written and directed by Lee, the film finds famed paleontologist Mary Anning (Winslet) hunting fossils in her Southern English town. It’s an isolated life until a wealthy visiting scientist (James McArdle) leaves his wife Charlotte (Ronan) for Mary’s keeping. Although there are differences in class and personality, a relationship forms between the two women and leads to a raw and passionate love affair. The slow-burn drama suffers from a definite lack of character development, and there’s not enough real connection to earn the hot-and-heavy stuff.

Down Under melodrama is in store for this film that, if nothing else, will have you fully and emotionally invested in a magpie. Naomi Watts stars as athletic Australian mom Sam who suffers a freak-accident fall off a roof and is left paralyzed from the chest down after a broken back. Her way back from a depressive state begins when one of her three boys takes in an injured bird. Named Penguin, the family’s new feathered friend wins over the whole family (including Andrew Lincoln as a doting dad). Sam takes a key role in nursing the bird, and both Penguin and Sam navigate a shared journey of taking wing again in their own ways.

Think “Portrait of a Lady on Fire” with comic-strip characters and you get this immersive biopic about Finnish artist Tove Jansson (Alma Pöysti). At the end of World War II in Helsinki, dance-happy Tove works to be a painter and carries on an affair with a married politician (Shanti Roney) but falls for hard for well-to-do theater director Vivica Bandler (Krista Kosonen). Tove’s passion for Vivica remains strong even though her love is fleetingly requited in the ensuing years, as the artist’s side project “The Moomins” – inspired by cartoons she drew for children in bunkers during the wars – becomes an international hit.

The documentary follows popular reggaeton singer J Balvin as he returns to his Colombian hometown for a solo stadium show, and explores an artist on top of the world struggling with his mental health. Balvin, who counts President Barack Obama as a fan, comes alive when he arrives in Medellín, where people take selfies with him at the gym (“I need my city. I need to feel its energy”), but he also debates speaking out – and what to say – as marches, protests and strikes break out against the country’s right-wing government. Balvin, though, most honestly discusses his crippling depression and anxiety: “It’s hell for real. It’s a fear of fear.”

Greek director Christos Nikou’s feature debut is an allegorical dramedy with a timely bent. During a global pandemic causing sudden amnesia, middle-aged Aris (Aris Servetalis) wakes up on a bus not knowing who he is. He enters a strange “New Identity” program that puts him through various challenges – go to a strip club, wreck a car – so Aris can create new life moments and take a Polaroid to capture them. He meets a woman (Sofia Georgovassili) also in “recovery,” though the truth of Aris’ past is gradually revealed in a thoughtful story about self-discovery and selective memory.

Spike Lee masterfully directs this filmed version of the former Talking Heads frontman’s Broadway show, an abstract and happy-go-lucky paean to empathy, love and human connection backed by a multicultural marching band of instrumentalists and dancers wearing his signature look (gray suit, bare feet). Byrne performs new wave tunes, funky jams and even a Janelle Monae protest song, gives a science lesson on brains and name-drops Brian Eno before launching into a number “using nonsense to make sense of a world that doesn’t make sense.” It’s a feel-good hour and 45 minutes that shows Byrne, 68, still strong of voice and possessing the physical dexterity of a yoga instructor.

You can’t throw a ball without hitting a new political documentary these days, but the new film about former White House photographer Pete Souza, who took breathtaking and candid shots of ex-presidents Ronald Reagan and Barack Obama, is one of the more emotional. While it looks at a wowing portfolio, the film also tackles Souza as an accidental social-media star who earned the nickname “king of shade” when he started Instagramming his pictures of Obama to troll President Trump’s tweets. “This is a serious job being the president,” Souza says in the doc. “I’m going to do what I can to make sure people remember that.”

As if Idris Elba couldn’t get any cooler, wait till you see him wearing a cowboy hat and bandanna over his face like he’s about to steal hearts and minds. That’s pretty much what happens in director Ricky Staub’s refreshing father/son tale. Elba’s Harp is a Black cowboy in Philadelphia who takes in his estranged son Cole (Caleb McLaughlin) after he’s kicked out of his Detroit school. Most fascinating is the exploration of a real-life Western-influenced subculture where these Black cowboys are disenfranchised in their own city yet still ride tall in the saddle with a palpable sense of freedom.

Director Sam Pollard’s illuminating and infuriating documentary focuses on how dirty tricks were used to undermine the work and influence of civil-rights leader Martin Luther King Jr. by longtime FBI director J. Edgar Hoover, who famously worried of a “Black messiah.” Using recently declassified files, the film reveals how the FBI wiretapped and engaged in full-on surveillance of King after the 1963 March on Washington to use his extramarital affairs to discredit and embarrass him. Pollard draws uncanny parallels to current social turmoil and the continued fight for equality at a time when it feels necessary to hear King’s words again.

Zhao’s drama focuses on Baby Boomers who hit the road for an unconventional life in vans and RVs after the Great Recession of the 2000s. Turning in a reserved but splendid performance, McDormand stars as Fern, a 61-year-old who, after her husband died and their Nevada town went belly up, now goes where the work is – be it an Amazon Fulfillment Center in Nebraska or a food-service gig at South Dakota’s tourist-friendly Wall Drug Store – and forms a mobile family with fellow nomads. They take care of each other and give tips on stealth parking as well as the best buckets to double as portable toilets, and because she’s also cast real-life people who embrace this existence, Zhao’s film oozes authenticity.

Vanessa Kirby and Shia LaBeouf both turn in career-best performances – and Kirby cements herself as a bonafide Oscar contender – in Hungarian director Kornél Mundruczó’s deeply emotional family drama. A home birth for Boston couple Martha (Kirby) and Shawn (LaBeouf) turns tragic – perhaps by the hands of the midwife (Molly Parker) – and in the ensuing months as a criminal case is built against her, the grieving husband and wife grow apart: She isolates herself from loved ones and he rekindles an old battle with booze and drugs. Kirby’s a revelation in a moving role, and Mundruczó beautifully crafts a harrowing birth sequence and a brutal family get-together pitting Martha vs. her mom (played by a great Ellen Burstyn).

Regina King’s amazing feature directorial debut is simply one of the best movies of the year. “One Night,” Kemp Powers’ adaptation of his stage play, imagines the conversations had by four Black icons (and friends) – boxer Cassius Clay (Eli Goree), football superstar Jim Brown (Aldis Hodge), civil-rights activist Malcolm X (Kingsley Ben-Adir) and soul singer Sam Cooke (Leslie Odom Jr.) – the night a 22-year-old Clay won the heavyweight title in 1964. The acting is outstanding across the board, and King’s greatest feat is showing these larger-than-life figures as wholly human, talking, laughing and arguing about race, religion, power and their own insecurities.

Fall streaming preview: 10 must-see new movies to see while stuck at home, from ‘Mulan’ to ‘Rebecca’

Opinion: The Oscars’ new best-picture standards are a meaningful, and reasonable, effort to diversify Hollywood