Updated at 3:50 p.m. with new information throughout.

AUSTIN — Any adult in Texas can receive the COVID-19 vaccine beginning March 29, state officials announced Tuesday, a dramatic expansion of eligibility that would make the Lone Star State the largest in the country to open up shots to anyone.

The announcement comes less than two weeks after Texas expanded eligibility to people aged 50 and older and as the state still ranks near the bottom of the pack nationally in administering doses.

As of Tuesday, about 3.2 million Texans are fully vaccinated in a state of 29 million, according to state data.

State officials said the decision to expand access to all adults was made to protect as many people as possible.

“We are closing in on 10 million doses administered in Texas, and we want to keep up the momentum as the vaccine supply increases,” said Imelda Garcia, associate commissioner at the Department of State Health Services and the chair of a panel that issues vaccination guidance.

The move was also driven by feedback from vaccination providers, who reported an inability to fill appointments and a fair number of no-shows, said Dr. John Zerwas, a vice chancellor with the University of Texas System and a member of the vaccination advisor panel.

“It was something we were hearing repeatedly enough we felt we really needed to open up the floodgates,” he said.

The expansion announced Tuesday applies to anyone over age 16, though only the Pfizer vaccine is authorized for that age and up. The other two are approved for use in ages 18 and older.

Dallas County Judge Clay Jenkins applauded the move and called on the state to ship more doses to North Texas.

“I’m excited about the opportunity to vaccinate more people. To do that effectively, we need the state to send Dallas and Tarrant County providers much more vaccine,” he said in a tweet.

Denton County announced Tuesday afternoon that it had opened its online vaccine registration portal to any adult.

Any adult resident in the State of Texas can now register for the COVID-19 vaccine in Denton County. Anyone interested in adding their name to the Denton County Public Health’s (DCPH) Vaccine Interest Portal waitlist should go to https://t.co/c1eSkeD4Oy. https://t.co/qVt9a5gHT5

Texas joins a growing number of states — including Arizona, Alaska and Mississippi — opening up COVID-19 vaccinations to the general public. President Joe Biden has said he expects the country to have enough coronavirus vaccine for all adults by the end of May.

Right now, the vaccine is available only to certain groups in Texas, including front-line healthcare workers, nursing home residents, teachers, people age 50 and older and adults with certain health conditions. 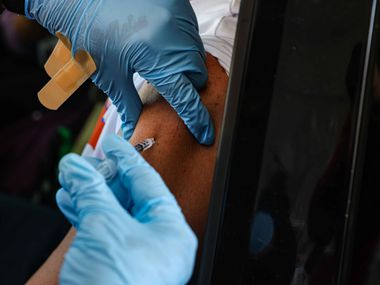 It remains to be seen if the expansion to all adults creates a mad dash for shots, like the one that occurred at the beginning of the state’s vaccination effort. Many more vaccination locations have opened since then and there are now three vaccines approved for use, made by Pfizer, Moderna and Johnson & Johnson.

As access expands, the state is directing vaccine providers to prioritize people age 80 and older when booking slots and to move those people to the front of the line if they show up for a vaccine without an appointment. About 500,000 people in that age group have received at least one dose, or about 60% of that population, according to state data.

“As eligibility opens up, we are asking providers to continue to prioritize people who are the most at risk of severe disease, hospitalization and death – such as older adults,” Garcia said.

The Department of State Health Services will also be launching a website to let people register in a central location for a shot through some public health providers. Most providers currently maintain their own registration site and waitlist, meaning people have often signed up at multiple locations.

The system, which has relied heavily on mega-sites that often require transportation and online registration, has been difficult to navigate for some residents, especially those who lack cars or internet access. In an effort to help remedy that, the state and some local entities are vaccinating sick and frail Texans in their own homes. It’s not clear how many people that initiative has reached to date.

Still, disparities in the state’s vaccination effort persist. While Black and Hispanic communities have been hit disproportionately hard by the coronavirus in Texas, white residents are being vaccinated at a much higher rate, according to the state data.

The rate is higher in parts of the Panhandle, West Texas and South Texas. But it is lagging in many East Texas counties.

The Department of State Health Services said some differences are due to demographics because there’s been a focus on vaccinating older people, spokesman Chris Van Deusen said. It has a lot to do with the demographics of the counties.

The state’s move to vaccinate all adults comes as the number of new daily cases and people hospitalized with COVID-19 have dropped in Texas from an all-time peak in January, although the pace of those declines has slowed recently.

Gov Greg Abbott lifted the statewide mask mandate and allowed all Texas businesses to open fully at the beginning of March. The nation’s top-ranking disease experts criticized the move as too soon.

Local experts echo that risk: According to UT Southwestern’s latest disease forecast, a small uptick in cases is projected in the near term, and the case trajectory will depend heavily on personal behavior and vaccination rates. Already, mask use in North Texas is declining and visits to retail and recreation locations are approaching pre-pandemic levels.

Staff writer Sue Ambrose contributed to this report from Dallas.

A roundup of questions, school levys/bonds on Greene County ballots

Sat Mar 27 , 2021
CLOSE Greene County voters will be headed to the polls in a little more than a week to decide who will serve on many municipal councils and school boards for the next couple of years. But along with votes on representatives, residents of Ash Grove, Rogersville and Walnut Grove, as […]