Katie Holmes appears to have moved on after her split last year from Jamie Foxx. She’s dating New York City chef Emilio Vitolo, 33, and they’ve been spotted on several public date nights in the city. The pair was first captured by TMZ in August grabbing dinner at the Mediterranean restaurant Antique Garage in Manhattan. That was followed by a makeout session in the outdoor dining area of Peasant Restaurant, as reported by the Daily Mail. They also pulled their masks down for a kiss while grabbing coffee days later.

“They adore each other and can’t get enough of one another,” a source told Entertainment Tonight last month. A second insider said, “In the past it seemed like Katie would sort of mold to her partners’ lifestyle. But with Emilio, Katie is so authentically herself.”

Ahead, here’s what we know about Vitolo, including his celebrity hotspot restaurant and rumors he ended his engagement for a relationship with Holmes.

He’s a chef at a celebrity favorite Italian spot.

Vitolo and Holmes’ dinner dates were no doubt delicious, considering his post as chef at Emilio’s Ballato in Soho. According to an InStyle profile, his father, Emilio Vitolo Sr., opened the Italian restaurant in the early ’90s. The business is a family affair for the Vitolos, as both his parents and two brothers work alongside him.

“It’s a seven-day-a-week commitment,” he told the outlet. “If you’re going to do a restaurant the right way, you always have to be there.” The one exception: Sundays, when Vitolo says his father takes the day off and his Peruvian mother cooks.

The restaurant is quite the celebrity hotspot and has hosted high-profile guests like Whoopi Goldberg, Rihanna, Justin Bieber, Bradley Cooper, Lenny Kravitz, and even former President Barack Obama. According to its Facebook, Emilio’s Ballato doesn’t take reservations, but does have an outdoor dining area in compliance with NYC’s COVID-19 safety restrictions.

On November 10, photographers spotted Holmes and Ballato outside of the restaurant with his father.

When he’s not serving A-listers pasta, Vitolo also has an acting career. He’s appeared in several movies and TV shows, including a six-episode arc of Royal Pains, a guest spot on Inside Amy Schumer, and a role in the 2019 indie film Tapestry.

He and Holmes are reportedly “serious.”

Although it’s only been about two months since the couple’s first outing, Us Weekly reports that Holmes and Vitolo are getting “serious.” A source explained, “Katie has been on cloud nine ever since Emilio came into her life. She doesn’t care what people may say about rushing into the romance. In her mind, this is the real deal, they’re riding a beautiful wave together, and she’s already decided it’s got the potential to go all the way.”

As for Emilio, a source said he “doesn’t seem to have a negative bone in his body and he treats her like a total princess. For the first time in longer than she can remember, there’s a guy by her side whom she knows has her back no matter what, and that counts for so much.”

However smoothly things may be going, Us Weekly reported that those close to Holmes have “some concern” about the fast-paced relationship. A source maintained that Holmes can decide for herself: “Nobody deprives her of that [freedom], and if she wants to make things official with Emilio, then the common view is good for her,” the source told Us Weekly. “She’s got some seriously protective friends and family though, so he’d better carry on treating her this well if he knows what’s good for him!”

He has a lot of celebrity friends.

During his downtime, Vitolo hangs out with several high-profile friends. Everyone from Danny DeVito to Omar Epps to Cuba Gooding Jr. has graced his Instagram feed. Most notably, Vitolo has close ties to Joe Jonas and Sophie Turner. In 2018, they spent New Year’s Eve together and he was on hand to celebrate Jonas’s 30th birthday last August. Vitolo has also made an appearance on The Tonight Show Starring Jimmy Fallon alongside Jonas and referred to him as “my brotha from Anotha motha” on IG.

Although they haven’t posted about each other on social media yet, Holmes and Vitolo do follow each other on Instagram. Back in July, he commented two dancing women emojis on a photo Holmes posted on set for her movie The Secret. Holmes commented on Vitolo’s last post, an oil painting, with several star emojis.

Prior to their new relationship, Holmes quietly dated Jamie Foxx on-and-off for years before their August 2019 split. A source told People at the time that their six-year romance “ran its course.” The insider added, “This industry is very tough on relationships. Jamie thinks Katie is an incredible human being. They had a very, very deep connection. They brought each other a lot of joy and laughter.”

Until this couple goes Instagram official, you can enjoy the online presence of Vitolo’s Rottweiler, Lil Franky. He’s got his own Instagram account, with a bio that describes him as “Nolita’s Finest Rottie 🇮🇹.” The dog frequently sports a blue bandana and poses with Vitolo on the page.

He was engaged to someone else weeks before dating Holmes.

Since news of Vitolo’s romance with Holmes broke, several reports have emerged claiming he was engaged to another woman mere weeks ago. Prior to the first sighting of Holmes with Vitolo in early September, a source told People he was set to marry designer Rachel Emmons.

“In mid-August, Emilio and Rachel were still engaged and living together,” the source claimed. “He broke off the engagement abruptly the second Katie showed some interested. Rachel is shocked. They were planning a wedding and their future together. It’s like she never knew Emilio. They haven’t had any contact since he broke up with her.”

Further proof of Vitolo’s closeness with Emmons in recent months could be seen on her Instagram. (Several posts that People cites have since been deleted from Emmons’ page.) A July 27 photo reportedly shows the couple on a sunset boat ride. That same month, she apparently shared pictures of herself at a Monique Lhuillier Bride store and wearing a jean jacket that said “Mrs. Vitolo” on the back. An August 12 post shows Emmons still wearing her engagement ring:

According to People, Emmons shared news of her and Vitolo’s engagement in February 2019. “The most celebratory, generous, honest, genuine person I’ve ever met. You always have my back and make every day a new adventure. You walk into a room and people gravitate to you. I couldn’t feel more lucky to spend the rest of my life with you,” she reportedly captioned the selfie.

Fri Nov 13 , 2020
PETALING JAYA, Nov 13 — The next time you order from AirAsia’s food app, you might just get the chance to meet AirAsia Group chief executive officer Tan Sri Tony Fernandes. That is if his recent social media post is anything to go by.     The business tycoon uploaded […] 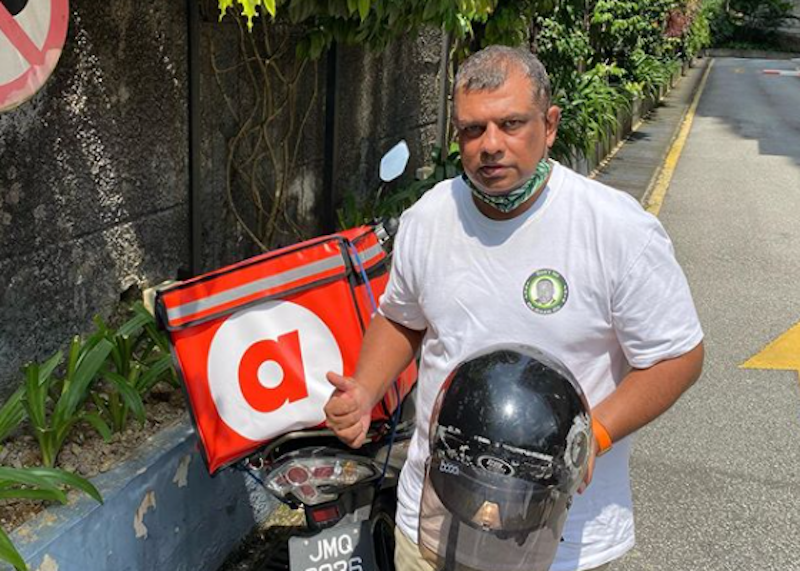