Walt Disney World’s vital influence on Florida’s extensive tourism industry will be put to the test this weekend as the huge Orlando resort re-opens its theme parks for the first time since mid-March.

Amid a raft of new procedures, adaptations and health and safety regulations, the House of Mouse is being seen as the potential saviour of the Sunshine State’s virus-hit economy that has suffered a massive downturn since the advent of Covid-19.

Orlando remains in a state of deep tourist depression and in urgent need of an economic turbo boost, despite other parks and attractions like Universal Orlando and SeaWorld reopening more than a month ago. Only this week, one of the leading local hotel chains – the Rosen Hotels group – announced its first round of redundancies due to continued lack of demand.

The company’s president and chief operating officer Harris Rosen amitted that “since the onset of Covid-19 earlier this year, we have maintained as many staff as possible, with the hope of business returning to usual in June. Regrettably, this did not come to pass.” John Chidester, marketing director of the Orlando area’s two Fun Spot amusement parks, added: “It’s not quite up to what everybody was hoping for at this time. Tourism is experiencing a slower than expected return.”

Consequently, all eyes will be on Disney starting today (June 11) as they open the gates of the Magic Kingdom and Animal Kingdom after a near four-month hiatus, followed by their Epcot and Disney’s Hollywood Studios parks next Wednesday (July 15).

The 47 square miles of Walt Disney World typically attract around 58 million visitors a year as part of Florida’s $90 billion tourist industry (£71 billion), but hotel occupancy has been down by as much as 97 per cent through much of the duration of the pandemic, while Orlando International Airport – the United State’s 10th busiest – reported being at barely 30 per cent of its normal volume only last week.

With Florida also experiencing a spike in its virus numbers and hospitalisations in the past month, the full return of Mickey and Co will be the litmus test for the state as it bids to put itself back in the holiday shop window, especially as Disneyland in California remains closed.

The other key question is how returning visitors will view all the Covid-enforced changes to Mickey and Co, which have created a decidedly different landscape and atmosphere for staff and guests alike. Just to start with, everyone (ages two and up) must wear a face mask with ear loops or ties and there are mandatory temperature checks outside the main entrance to each park.

Anyone registering a temperature of 38C or higher will not be admitted, nor will the rest of their group. Crucially, advance reservations are required as Disney carefully controls attendance numbers, which it has done with the successful reopenings of their parks in Shanghai, Hong Kong and Tokyo.

Guests with tickets must visit Disney’s website and access the new Park Pass Reservation system to book a specific park, day and arrival time. Disney has declined to state how many people will be admitted on a daily basis, or the percentage of normal capacity, but, on the evidence of four preview days this week, when only off-duty staff and annual passholders were admitted, it is likely to be a low-crowd environment, at least to start with.

Waiting times for key rides were rarely more than 15 minutes and every queue has been adapted for social distancing with markers and Plexiglass screens. Dozens of hand sanitiser and hand-washing stations have been added, while cleaning crews visit each attraction regularly – albeit not after every ride, from our observations.

Ride vehicles are spaced out with passengers in every other car rather than every seat, while indoor shows have been adapted to include empty seats so as to provide the necessary space between each group. Surprisingly, Disney has not introduced any of its high-tech virtual queuing techniques for the most popular rides – with the exception of the new Star Wars: Rise of the Resistance attraction – which suggests the initial attendance will, indeed, be extremely low.

Strict limits have been placed on the parks’ many restaurants and shops, and there will be a virtual waiting system for shops, via the Disney Parks app, once capacity is reached. All payments can also be done in a completely cashless way, either by the resort’s own ‘MagicBands’ – wrist bands that act as entry ticket, room key and payment system – or using mobile device payment methods. Restaurant menus are all on the app, and meals can be ordered in advance, paid for online, and picked up in a largely contactless manner.

Where visitors will see the biggest difference in the Disney ‘magic’, though, is with the usual character appearances and the impressive daily spectacles of the main parades and fireworks shows. There is no hugging Mickey (or Minnie, or Donald, or a princess), and there are no traditional photo opportunities. Instead, the characters appear at unscheduled intervals in mini-cavalcades that provide a ‘socially distanced’ experience while still affording a chance to see them at relatively close quarters.

Sadly, the big pyrotechnic extravaganzas are a thing of the past, at least for the immediate future. The fireworks spectaculars at each of the Magic Kingdom, Epcot and Disney’s Hollywood Studios have all been deemed too popular for their own good, with Disney unable to devise a way to keep the crowds sufficiently separated.

Staff will also be on hand to ensure face masks stay in place, over both nose and mouth. Masks can be removed in restaurants and at several open-air Relaxation Stations in each park and, with daytime temperatures around 32C-33C, these are likely to be extremely popular.

Dr Pamela Hymel, Disney’s chief medical officer, insisted the company is going all out with its health and safety measures. She said: “From increased cleaning and disinfecting across our parks and resorts, to updated health and safety policies, we have reimagined the Disney experience so we can all enjoy the magic responsibly.” It certainly looks impressive enough and, with strict entry quotas each day, the lack of the usual summer crowds is likely to make for a more enjoyable experience.

But the question remains: will this be enough to kick-start Florida’s ailing tourism business – can Mickey salvage the Sunshine State’s bank balance?

On board Tui's first post-lockdown flight

Sat Jul 11 , 2020
Passengers alighting TUI’s first flight after lockdown The appeal of package holidays is ease and convenience. But in a post-lockdown world, when even basic travel manoeuvres can feel painfully complex, it’s hard to imagine how they’ll work. Until a week ago, the idea of a beach break in the Med […] 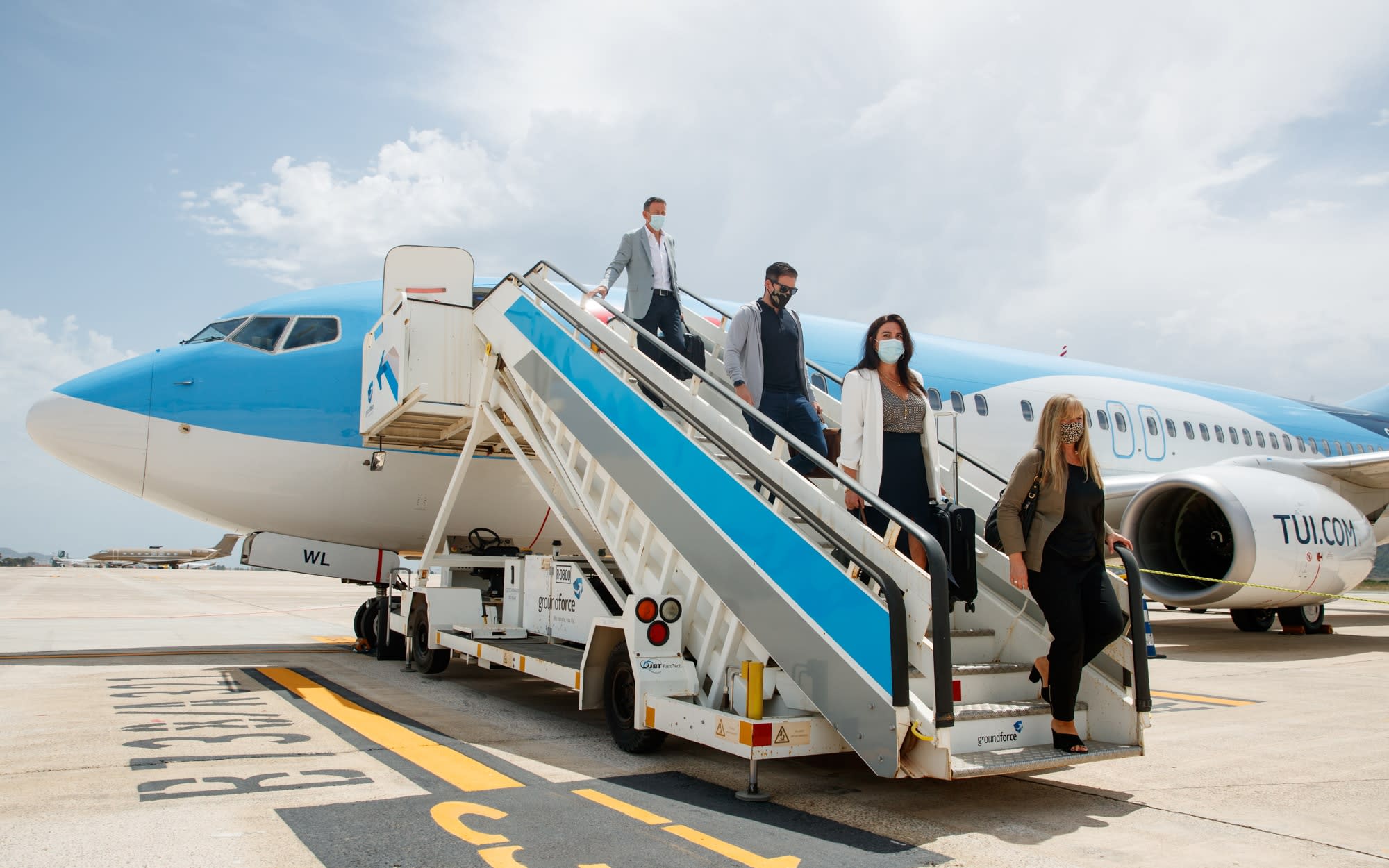