On the day of Kate Armitage and Eric de Grandmont’s wedding, she trimmed his unruly eyebrows in the bathroom. Later, he buckled the glittery straps of her chunky-heel sandals while they sat together on the couch. The couple exchanged playful banter while getting ready as if they had shared a home for years, but they have never spent more than a week together in a single stretch. Their homes are 600 miles apart in different countries, separated by a closed border during the coronavirus pandemic.

Mr. de Grandmont, 39, flew from Quebec to reunite with Ms. Armitage, 35, in Moorestown, N.J., just days before their nuptials. Travel from the United States to Canada is limited because of pandemic precautions, so the pair had not been together for six months. Canadians can spend time in the United States but are required to quarantine for two weeks upon return. Mr. de Grandmont is a grocery manager at Loblaws, a major chain there. For this trip, he used three weeks of vacation just to spend one week with Ms. Armitage.

Mr. de Grandmont said that enduring another long separation after this trip could have been tolerable if they knew when the lockdown would be lifted, but the uncertainty of the pandemic makes that date impossible to predict. “You shouldn’t need a piece of paper to demonstrate who your family is,” he said, “but I didn’t know how else to manage the situation.”

A marriage certificate affords Ms. Armitage the right to visit her husband in Quebec, and her remote job as an insurance agent for American Income Life Insurance offers her the flexibility to quarantine without taking time off from work. Although the pair knew they would get married eventually, Mr. de Grandmont had called Ms. Armitage just a few days before his flight to propose.

It’s not unusual for the couple to have vulnerable conversations on the phone because their relationship has always been long distance. It started where international borders are obsolete — on the internet.

Ms. Armitage encountered Mr. de Grandmont when she began playing Final Fantasy, a online role-playing video game, to decompress during a stressful time in her life. In March 2019, they joined the same alliance, a team that works together during battles and includes a friendly agreement not to impede each member’s progress in the game. But Mr. de Grandmont attacked an enemy base Ms. Armitage was trying to conquer, taking all the points from the win.

“I did all the work, and he took all the glory,” she said.

Mr. de Grandmont apologized after Ms. Armitage roasted him in the chat then invited her to a Discord server where gamers enjoy community outside the fantasy realm. Within a week, they were texting every day. Because players choose avatars and screen names that uphold anonymity, they connected on social media to confirm they were truthful about their identities. Daily check-ins evolved into nightly calls where they laughed about cultural differences and accents, discussed parenthood and vented about life’s stressors.

Ms. Armitage was not seeking a new romance during the early stages of their relationship as she was seven years into her first marriage and just beginning a personal journey to address debilitating mental health concerns. “For years, I couldn’t do anything — go to the store, make a phone call — because my depression and anxiety was so bad,” she said.

She said that her former husband, whom she married in 2011, didn’t understand. “I just felt really alone,” she said.

At the end of 2018, she made an appointment with a psychiatrist and was prescribed medication that provided her with the clarity she needed. She believed her marriage would improve, but it continued to deteriorate. “It just wasn’t the same marriage anymore,” she said.

Mr. de Grandmont offered affirmation and acceptance as she learned to speak more freely about her anxiety and depression. He encouraged her to continue her medication, go to counseling, find hobbies that bring her joy, and reach out whenever she needed support. “This is something I’ve dealt with throughout my life, too,” he said.

Ms. Armitage admitted her emotional affair to her husband and she decided to pause contact with Mr. de Grandmont to work on her marriage.

“She owed it to her ex to try again,” Mr. de Grandmont said.

But the marriage would not be revived.

Mr. de Grandmont traveled to the United States in June 2019 to meet Ms. Armitage in person. “From the beginning, I felt at home with him,” she said. “I didn’t even know that people could feel this way.”

Ms. Armitage said that sharing custody has been hard on the family, and the children’s pediatrician recommended therapy. “We finally start to settle into our routine and they’re comfortable again, then they leave,” she said.

Despite their inability to be physically close, the partnership Ms. Armitage found with Mr. de Grandmont has helped her carry on. “It’s still a lot easier because he’s supportive,” she said, adding that being separated during quarantine has made them a stronger couple. “All we can do is talk, so we’re becoming good communicators,” she said. “It’s giving us more tools to deal with the challenges of our relationship.”

Before the pandemic, the pair took trips in the Northeast to tourist destinations halfway between their homes. They often explored new areas with the company of Mr. de Grandmont’s children, ages 5 and 7, who made a scrapbook of their American adventures. Stipulations in the divorce between Ms. Armitage and her former husband prevented her own children, ages 3, 5, and 7, from meeting Mr. de Grandmont until a few weeks before quarantine began.

Blending their family comes with additional obstacles as the Quebecers primarily speak French, but Ms. Armitage said that it hasn’t fazed the children, who visit with Mr. de Grandmont and his children on video chats.

They’re slowly becoming familiar with linguistic nuances and colloquialisms. Mr. de Grandmont laughed as he explained that they have sometimes miscommunicated and blundered because they didn’t know cultural connotations, euphemisms and slang. Until they’re fluent, the family relies on gestures and facial expressions to guide conversation, and the children sometimes ask their parents to translate.

On Sept. 3, none of the children were present for the outdoor ceremony on the banks of the Delaware River in Riverton, N.J. Bryan Hoffman, a Universal Life minister, performed a shortened ceremony after a tornado watch had been issued on the stormy day. The couple exchanged a few quick words rather than passionate vows as the rain began.

They hope to have a second, more meaningful ceremony, when the children can participate. “This was just to make it official on paper so we could see each other again, but the real deal is when all the kids can be together with us,” Ms. Armitage said.

To stay connected while they’re apart, the blended family has established parallel routines, like cooking dinner, tucking the children into bed, and watching shows at the same time. They livestream mundane moments, like loading the dishwasher and laundry-folding, which act as a virtual bridge between either homes.

“We had all these different problems piled up in front of us, and sometimes it seems like they just keep piling up,” Mr. de Grandmont said, “but it helps us build a strong foundation moving forward.”

The couple dreams of sharing a home in the same country, but for now, Ms. Armitage drives seven hours each way to see Mr. de Grandmont whenever her children aren’t in her care. She’s negotiating permission with her ex-husband to take her children across the border for visits.

Mr. de Grandmont lives on a half-acre of former farmland that the couple is slowly cultivating back to full use. Ms. Armitage said, “Last time I was there, we planted 25 rows of garlic.” Although it’s difficult to make long-term plans for their future, they’ll work together to harvest the crop next spring.

Where A public park overlooking the Riverton Yacht Club in Riverton, N.J., on the Delaware River.

Something Forgotten Because the impending storm led to the ceremony being moved up an hour earlier, Ms. Armitage left the house without her something borrowed, which was also her something blue — a pair of earrings her aunt offered for good luck. In her haste to make it to the ceremony in time, she also left the bouquet a neighbor provided in the fridge. The couple enjoyed these forgotten items when they returned to her home, along with a cake her aunt had decorated with the Quebec flag.

Can I Get a Witness? The couple had just a week to plan the wedding. While completing required paperwork the day before the ceremony, Ms. Armitage called neighbors who got to Town Hall minutes before the clerk’s office closed. One signed the application as a witness and another lent her cash to cover the filing fee. A third, Bill Mufalli, was one of two legally required witnesses at the formal ceremony on the following day. Ms. Armitage said, “I’ve only lived here a year, but we obviously have awesome neighbors.”

Fri Oct 23 , 2020
The widespread displacement of jobs has set off a scramble among workers to find new skills and careers — a situation that also presents a challenge for the government as it seeks to keep people employed and off the relief rolls. House Democrats are exploring pandemic aid that would fund […] 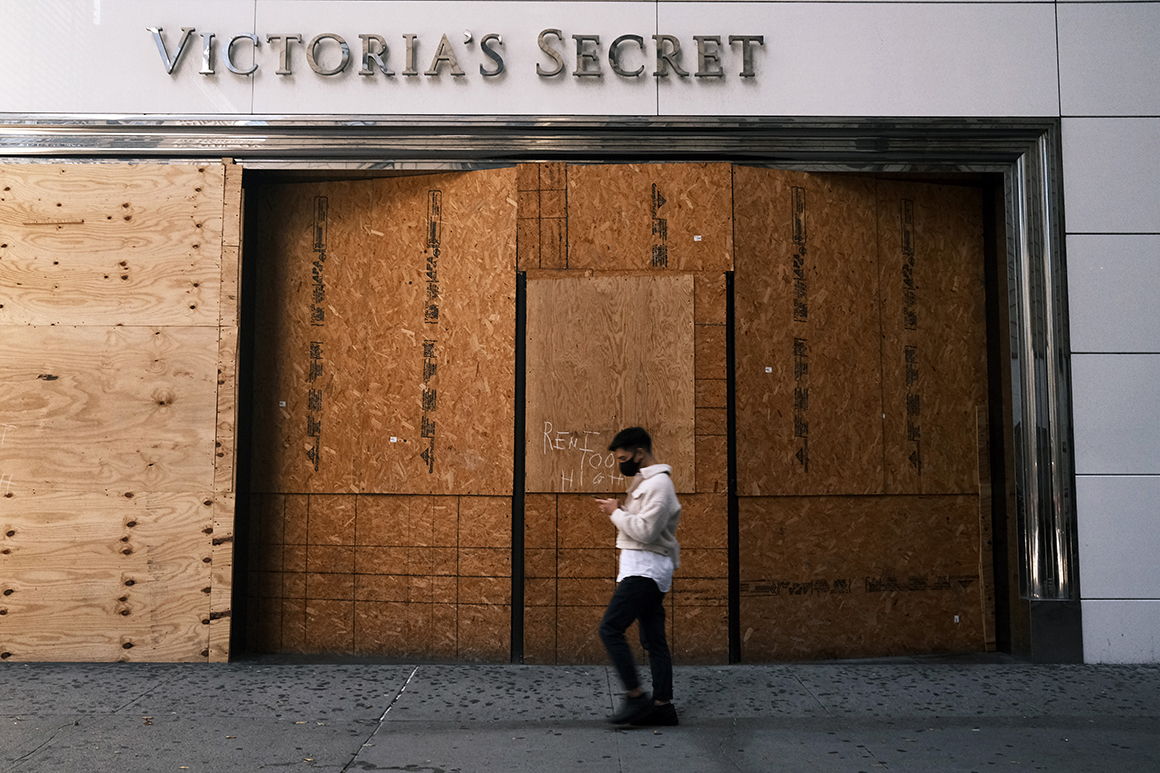