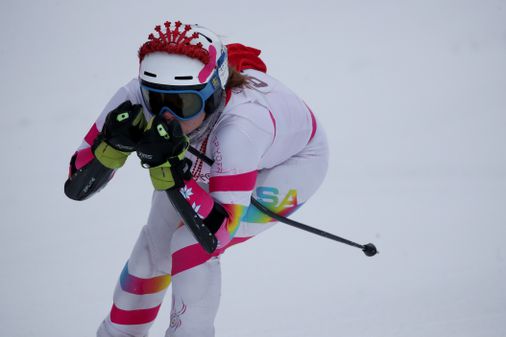 From 3 to 4:30 p.m., 14 teams of 16 skiers each took turns running the slalom and giant slalom course at Nashoba, some of them sporting costumes or accessories, and almost all of them smiling as they came down the hill and rushed to check the clock and compare their time against their friends, siblings, or rivals.

“Just because there’s no state [meet], that doesn’t give these events any less meaning,” said Katie Bateman, a senior captain for Nashoba Regional who has finished top 10 in the slalom at states in each of the past three seasons.

“I still want to push myself to be the best skier I can be. And these events are also a great way to connect with your teammates and realize how much you get out of [skiing].”

With almost twice the number of skiers participating in the “fun run” this year, the slalom course was worn down by the time Bateman raced. But for some sub-varsity racers, this was their only chance to race against the clock in an official setting, so they were grateful that the ski area didn’t turn them away.

Lincoln-Sudbury 11-year coach Matt Wentworth said he was preparing to give several sub-varsity racers their first official run in the final meet of the Mass Bay West season on Thursday, but a COVID-related issue canceled the competition for 40 boys’ and girls’ skiers. Instead, he was able to bring 16 skiers to the fun run and give a few of those newcomers, as well as his seniors, another shot.

“This wasn’t really in our league schedule, but [Nashoba Valley] said we could absolutely give our kids one more chance, and all the coaches were on board immediately,” said Wentworth, who also coaches varsity baseball and girls’ JV soccer at L-S.

“You hardly ever coordinate with other coaches in other sports, but with skiing, every week the coaches have to communicate in order to make these things happen. It’s amazing how much time they put in.”

Weston coach Mark McCaughey praised Wentworth for serving as the primary organizer behind Mass Bay West events this season. After steering the Weston boys’ and girls’ teams to league titles, McCaughey hopes to create an informal setting in which skiers from multiple leagues can face off in a competitive format.

McCaughey has been in contact with Wachusett Mountain Ski Area regarding availability for races in early March. Wachusett runs an adult league from 6 to 8 p.m. Monday through Thursday until the end of February, so there will be an opening for student-athletes to schedule timed runs during the first week of March.

While it wouldn’t be an official MIAA event and coaches could not attend in an official capacity, McCaughey could come watch his daughter, Kenna, and Marblehead coach John Thompson could watch his twin sons, Christopher and Matthew, to see how they might have stacked up against the competition in a theoretical statewide meet.

“That would mean a lot,” said Weston senior James Davis, who took first in the giant slalom at states last winter. “I think I’ve definitely improved a lot since last year, so I’d love to see how I compare. I know the [other top racers] well and it would be nice to see them and finish off the season.”

On Saturday, those top racers received word of another opportunity to compete in a makeshift postseason format when Blue Hills Ski Area director Mark Casale announced an Alpine Championship Series from Feb. 22 to March 3.

Individual student-athletes can sign up and form teams of up to seven to (unofficially) represent their schools against competition from across the state. There will be three qualifying races before the Blue Hills Alpine Championship on March 3, with the three medalists crowned in the U-14, U-16, U-19, Collegiate and Masters divisions.

“They’ve been talking about it for years, and this year Mark Casale really took the bull by the horns,” said Thompson, who has guided the Marblehead boys to four consecutive Alpine skiing state titles.

“If we can get skiers from leagues in [Western Mass.] to the North Shore, then it could be a representative competition of a statewide format, even though it’s not [MIAA] official.”

Thompson’s top skiers on the boys’ and girls’ sides were among the first 40 skiers to sign up for the event, and while he can’t accompany them as a coach because of MIAA bylaws, he can attend in an advisory capacity.

For the coaches who have worked tirelessly all year to give their skiers opportunities, stepping back and allowing the student-athletes to organize their own competition would be a sweet reward.

“Everything this year seems to take four times as long and it’s four times as difficult and half as fun, but the kids are smiling,” said McCaughey. “They really enjoyed it and recognize how valuable it is. Having one more competition against the clock will give them something to look forward to next year when we’re coming back to normal.”

▪ Conference tournaments have kicked off in earnest during February vacation. Many leagues in Massachusetts are running some sort of postseason event to crown champions in basketball and hockey. Check in with individual leagues to find schedules and watch the Globe Schools Scoreboard for results from these tournaments.

▪ Former Sandwich boys’ basketball coach Dennis Green died Thursday from brain cancer. The Randolph High alum took over the varsity basketball program in 2013-14 and led the team to its first Atlantic Coast League title in 25 years, then guided the Blue Knights to a 19-1 record and a run to the Division 2 South semifinals in the 2014-15 season. He retired after last season because of health concerns.

▪ High school wrestlers might not get the opportunity to compete this year because of coronavirus concerns, but the James Peckham Scholarship Committee is accepting applications for graduating seniors who are planning to wrestle in college. Applications for two $1,500 scholarships must be completed online by April 15.

▪ In a virtual meeting Wednesday, the MIAA provided an update to rules regarding football activities in accordance with updated guidelines from the state’s Executive Office of Energy and Environmental Affairs. Football programs will now be allowed to conduct conditioning workouts indoors when the Fall II period begins on Feb. 22 . . . In the same meeting the MIAA Board of Directors waived the two-year waiting period to allow Lynn Classical and Lynn English to transition from the Northeastern Conference to the Greater Boston League, beginning in Fall 2021.