Despite the stock market doing fairly well in the last 12 months, the same cannot be said for the general economy. Several industries such as airlines, auto parts and equipment, recreation facilities, oil and gas drilling, and restaurants have taken brutal hits. However, there are also several safe stocks out there that perform regardless of the conditions and the economy’s overall state. 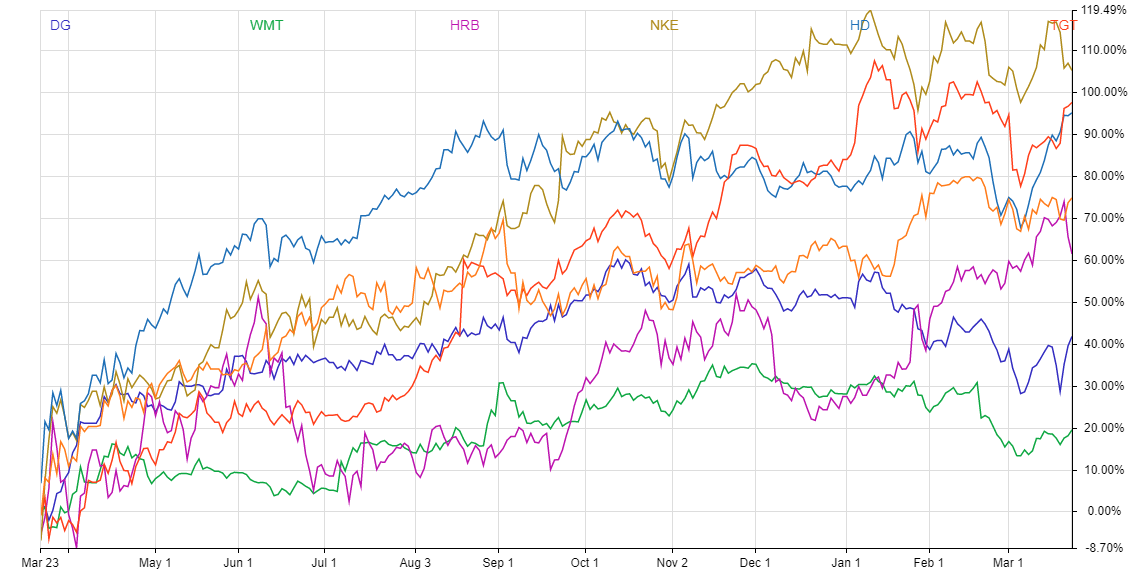 Overall, this list provides a nice mix of companies that manage to do well during a slowdown.

You will want to exposure to these seven stocks to make your portfolio recession-proof:

The big-box retailer was a net beneficiary of the novel coronavirus pandemic. Consumers rushed to purchase groceries and other essentials. In the fourth quarter, Walmart’s e-commerce revenue grew by 69% in the U.S. and same-store sales by 8.6%. Adjusted EPS came in at $1.39 per share, missing analyst estimates of $1.507 per share by 7.8%. However, it was the first miss in four quarters. It shouldn’t surprise you. The American multinational retail corporation has made it a habit of performing well in testing times.

In 2008, Walmart reported net sales of $401.244 billion, a 7.2% year-over-year increase. Reported EPS grew 6% to $3.35 per share from $3.16 in the prior year. The Great Recession devastated world financial markets. The scale of the recession is something we have never seen since. However, it did not stop Walmart’s momentum, and the company still managed to turn a profit.

During the pandemic, the company concentrated on e-commerce, building out its digital infrastructure further. This resilience and forward-thinking makes it one of my all-weather safe stocks.

During periods of economic weakness, it’s not surprising that dollar stores are gaining traction. Hence Dollar General has done quite well during the pandemic. Sales have grown by 17.1% in the last year. In the fourth quarter, the discount retailer reported a net income of $642.7 million, or $2.62 per share, an increase from $535.4 million, or $2.10 per share, in Q4 2019. Sales came in at $8.41 billion, up from $7.16 billion last year.

A majority of revenue is derived from consumables. It makes sense since consumers want to buy essential items during a recession. The gross margin is an excellent 31.6%, and the return on equity stands at 36.5%. Couple that with a fairly healthy cash flow position, and you have a solid stock in terms of fundamentals.

A major question when investing in DG stock is whether Dollar Tree (NASDAQ:DLTR) is a better investment. Even though it can get confusing, these two entities are different but offer similar business models. However, I believe DG stock is more attractive since it has better fundamentals, and it has risen by 32.3% in the last year versus 52.6% for Dollar Tree. Trading at 19 times forward price-to-earnings, the stock is a far more attractive option.

No surprises that a tax preparation company has found itself on this list of safe stocks. As you know, it can get quite complicated when preparing and filing a tax return. Hence, the average Joe will go to either a certified public accountant (CPA) or a tax preparation franchise such as H&R Block or Jackson Hewitt.

Now, many would-be wondering whether a tax preparer will do well in the current environment. Considering disposable incomes are taking a hit, people will be tempted to compile and file their tax returns independently. While the allure of doing that may have increased, I don’t believe H&R Block is in trouble.

In fact, at a time when there is so much stress in our world, people will prefer to go ahead and outsource this element of their life. Refinitiv data shows that in the last six quarters, the company has surpassed Wall Street estimates four times. Filers with complex returns will continue to use HRB’s trained professionals for tax return preparation.

Additionally, the company has done quite well to modify its business model for an increasingly digital future. If you use Tax Pro Go, you can upload documents through your smartphone, and then you can let the tax experts do the rest. And if you are confident in self-preparation, then you can go ahead and use the online tools to help you do that.

Even if the economy is in a recession, you still have to pay your taxes. Shares are trading at 7.7 times forward P/E.

Nike is the largest apparel brand in the world. No surprise that the stock did well in 2020 and 2008, despite recessionary pressure. In the last year, NKE stock gained 97.2%. According to Stock Rover data, in the last 12 quarters, the apparel giant has surpassed expectations 10 times, with the last three quarters giving consecutive beats. In its most recent quarterly results, total sales rose to $10.36 billion from $10.1 billion a year. Refinitiv data shows the EPS of 90 cents beat expectations by 18.1%.

Although the global health crisis severely impacted Nike, it has done quite well, all things considered. The widespread port congestion in the United States and European store closures shifted its focus to e-commerce. Due largely to its popular SNKRS app, the company increased Nike Brand digital sales by 82%, 84%, and 59% in the last three quarters, respectively.

The sports apparel and shoe giant has increased its dividend for the last 10-plus years in a row. Considering its strong track record and brand value, it’s no surprise that NKE finds itself on this list of safe stocks.

Source: The Art of Pics / Shutterstock.com

One name that doesn’t get a lot of love these days is Microsoft. The darling of the dot-com boom has surprisingly gotten overshadowed by upstarts like Tesla (NASDAQ:TSLA) and Nio (NYSE:NIO). These companies have a lot of hype. However, they don’t have the sales to back them up.

But MSFT is different. It has three broad divisions, including diverse businesses, such as legacy Microsoft Office, SQL Server, Skype, and LinkedIn. So there must be some facet of your life that comes into contact with an MSFT product.

However, despite such a large product suite, MSFT stock has a year-to-date return of 3.8%. I would chalk that down to the company being a mature organization that is more stable than exciting.

From a fundamental perspective, everything is clicking. Sales have increased by 15.7% on average in the last three years and EPS by 62.9% during the same period. Meanwhile, gross margin and return on equity stand at 68.4% and 39.4%, respectively. This is no surprise considering its business’s asset-light nature.

As more people worked from home during the pandemic, MSFT saw a huge rise in usage. Although that trend will give way a bit now that things are going back to normal, Microsoft has recession-proof revenue streams due to stable recurring fees.

The pandemic has led to an unprecedented increase in home and backyard projects. It makes sense. People are spending more time in their homes. Hence, they are tinkering and repairing whatever needs a bit of work, leading to a massive boost in revenues for home improvement companies. Home Depot is a net beneficiary of the trend, leading to a place on our list of safe stocks.

In the past three quarters, the world’s largest home improvement specialty retailer topped analyst expectations each time. In the fourth quarter, net sales increased 25% to $32.26 billion from $25.78 billion in 2019, handily beating estimates by $1.52 billion, per estimates compiled by Seeking Alpha.

The retailer did not provide an outlook. Investors and analysts are a bit squeamish regarding what it means regarding the company’s future, leading to the stock dipping a bit. The concerns are understandable. The pandemic acted as a tailwind for the company and its peers. Moving forward, sales could be negatively impacted as the effect of the pandemic wears off.

Target is the eighth-largest retailer in the United States. Like Walmart and Costco (NASDAQ:COST), the company had a great 2020. Consumers flocked to the nearest Target to buy groceries, essentials, and other consumer items. E-commerce sales also increased during this time, thanks to the retailer’s multi-year strategy of investing heavily in online sales.

In the third quarter, the company saw digital comparable sales increase by 155% year-over-year. Overall, revenues are up 19.78% on a trailing 12 months basis. EBITDA growth during the same period is 24.02% – pretty good fundamentals. You can add a dividend yield of 1.5% and 10-plus years of consistent payout growth to the list of reasons to buy this one.

Much like Home Depot, investors hope that the pandemic’s gains do not get eroded soon. Considering that Target has grown revenues at a respectable 17.6% in the last five years, I don’t foresee that happening, making it one of my safe stocks.

On the date of publication, Faizan Farooque did not have (either directly or indirectly) any positions in the securities mentioned in this article.

Faizan Farooque is a contributing author for InvestorPlace.com and numerous other financial sites. Faizan has several years of experience analyzing the stock market and was a former data journalist at S&P Global Market Intelligence. His passion is to help the average investor make more informed decisions regarding their portfolio.

Mon Mar 29 , 2021
You don’t need to leave your home to learn how to cook, the best online cooking classes can teach you everything you need to know. Whether you don’t know how to chop vegetables or you’re trying to become the next contestant on Netflix’s Sugar Rush, you can learn both basic […] 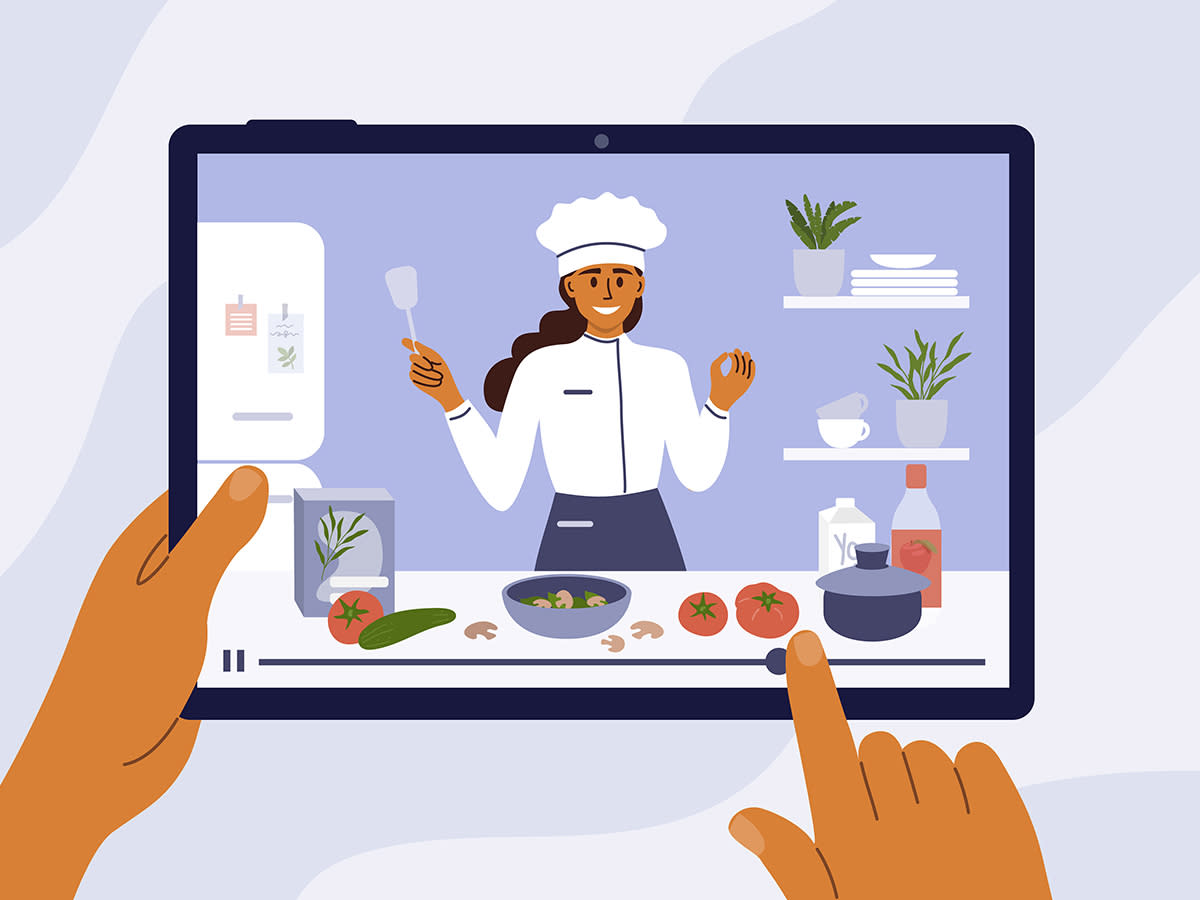