Skip to content
Lost ended its seminal seven-season run just over 10 years ago, with the many mysteries of Oceanic Flight 815, the island, the Others, the Dharma Initiative and more mostly answered.But for a show so built around its lingering questions, its unexpected twists, and the mythology built in tandem with a fanbase engaging online like few had before in TV, Lost’s legacy still looms over the TV landscape. And to honor the finale’s 10-year anniversary, showrunners Carlton Cuse (Jack Ryan, Bates Motel) and Damon Lindelof (Watchmen, The Leftovers) virtually reunited during New York Comic-Con for a fan Q&A. Questions ranged from the sincere, to the puzzled, to the absurd, and here are some of the most interesting tidbits from Cuse and Lindelof’s answers — including why there’s one question they just won’t respond to.

Can’t Curse on Network TV? Leave It to the Scripts

While not a completely new revelation, a unique approach to the scripts may be one bit of Lost information fans might have missed in the show’s on-air days.

When discussing how the show would have been different had it been made in 2020 versus now, aside from perhaps writing it for a cable network or streaming service without ad breaks, one of the biggest changes would likely be a chance to have characters curse more.“The one thing was language,” Cuse said. “It felt sometimes a little restrictive, you have a limited vocabulary of exclamation words in network television. If you read the scripts, they’re full of f-bombs…because we couldn’t say certain things on screen, we wrote them into the description.

And that’s something that clearly left a mark on the Lost writers’ room — Edward Kitsis and Adam Horrowitz, two Lost writers who went on to lead Once Upon a Time, brought the curse-filled script approach to OUaT.

The two also joked that less episodes would have been produced in the longer early seasons of the show, which means some of the less well-received installments might have never needed to happen..

“Jack would never have flown a kite on the beach in Thailand,” Cuse joked of the “Stranger in a Strange Land” episode.

During its run, Lost was no stranger to fan theories, and, naturally, the headcanon that would result from them, but one fan wondered whether the showrunners themselves ever imagined what life was like for the characters after they stopped writing episodes.

In response to one fan asking this question and specifically explaining her own belief that Hugo “Hurley” Reyes runs a golf tournament on the island, Lindelof was kind enough to make it official. Or, at least as official as a 10-year later Q&A can make it.

“Officially…we can verify her theory that in fact Hugo is having a yearly invitational, it’s called the Dharma Open. It’s invitation only,” Lindelof said.

“It starts with the fourth round, and it finishes with the first round,” Cuse joked.

But while a yearly golf tournament is perhaps a bit easier to reconcile for Hurley’s post-show life, one aspect of the character takes on a new meta-level that the writers likely could never have prepared for. Hurley is, of course, a huge Star Wars fan, and when asked how he would have received the new trilogy of films, Lindelof joked about Hurley’s fandom, but also pondered what J.J. Abrams’ connection to both Star Wars and as a co-creator of Lost would mean for the character.

“There’s a meta-level here involving J.J. that I can’t quite wrap my head around…the fact that J.J. Abrams co-created Lost and also worked on the Star Wars movies and that Hurley could watch them fries my brain a little bit,” Lindelof joked.

Just How Tough Is Time Travel to Write?

As time travel became an ever more important aspect of Lost’s storytelling, the complexity of the plots with which the storytellers had to contend also intensified. When asked about whether time travel is just flat out tough to write, both Lidnelof and Cuse agreed it was, using one of the most beloved episodes of the show as an example.

The Desmond and Penny-focused “The Constant” is arguably one of if not the most praised hours of the show, and that certainly translates from the amount of work that went into crafting it.

Lindelof explained that an average episode, to break the story in the writer’s room, would take about a week and a half. For “The Constant,” it took them about seven weeks.

“We chewed up this entire time of story breaking real estate trying to do this one episode that put us really behind and out of sorts because it was so tough to crack,” Cuse said.

Lindelof explained that was in part due to the type of time travel stories they were telling with Lost.

“Every butterfly that you step on, you have to have already solved for. You can’t create any paradoxes. So the entirety of the Dharma season when they traveled back in time to the Dharma times was basically saying, everything they’re going to do here has already been pre-ordained,” he noted.

“You have to approach it with a great degree of delicacy. Lost and ‘delicate’ were strange bedfellows.”

So…Why Won’t They Answer Any Questions About the Other Outrigger?

If you want someone to blame for never knowing who, infamously, was on the other outrigger, you have The Sopranos’ creator David Chase to thank…sort of.

In discussing why the two never reveal the answer to who was shooting from the other Outrigger in the episode “The Little Prince,” Lindelof noted that Chase’s refusal to ever discuss the ending of The Sopranos informed their reasoning for not explaining this bit of Lost lore.

“…Our finale was not about not telling, in fact we feel like we told you everything,” Lindelof said. “And so the idea that there were unanswered questions about Lost, I continue to challenge any fan to say, ask us a question, we’ll answer it or we will provide you with a roadmap to get the answer that the show provided,” he continued, pointing to mysteries like Walt, the numbers, and more.

“We will answer all of those questions, except for one, which is the outrigger, and that, we will take to our graves.”

But Lindelof offered some hope — there is in fact an answer, but the only way the masses may find out is if Cuse and Lindelof, well, die.

“I will say we did write the scene that answered the question, and other people outside of our writers’ room have seen the scene and been sworn to secrecy. So should Carlton and I die, and our memory be maligned as if we didn’t know [who was on the other outrigger] and that’s why we didn’t tell, those individuals can come forward and say, ‘Now that they are dead, I will tell you who was on the outrigger.’ But we will maintain our personal integrity,” he defiantly concluded.

Would Cuse and Lindelof Ever Work on a Lost Reboot?

ABC executives have discussed the want for a reboot of the series, though no Lost 2.0 is in the works just yet. But should it ever be, don’t expect Cuse and Lindelof to be a part of it — not that they’ll be against it.

“There doesn’t feel like there’s anything left to say that’s worth saying…we did it,” Cuse said of why the two would want to be involved.Lindelof explained he’s never been approached about a reboot, though he’s heard word online as we all have about execs being open to a reboot. And he’s open to it as well, but not as a show he would want to make himself.

“For the three final seasons of the show…we put so much emotional energy into ending this show. In the middle of the third season, which is when we finally got word [the network would let us end it], everyone in the entire world was like ‘It’s impossible.’

“So for us to put so much emotional energy into getting the ending, and then all the creative energy in seasons 4, 5, and 6 of doing the ending the best we could, to do the ending on our own terms, the way we wanted to. To turn around, even 20 years later, and to say ‘Well that wasn’t the ending. It was just an ending,’ it feels wrong on every level, but that’s because it was our ending.”

Lindelof and Cuse did both echo the idea that new writers inspired by the original series could certainly put their stamp on the Lost universe and its themes.

“And I agree with Carlton wholeheartedly that enough time has passed for an entire generation of people who grew up with Lost to say, ‘Hey I’m a writer,’ or ‘I’ve got a take on this thing,”” Lindelof said. “I think that stories can be told by anyone and anyone can take control of the story and make it their own vision, and that can be exciting.”

So do Lindelof and Cuse have to go back to the island? Maybe not, but it doesn’t mean we all can’t return there someday.

For more from New York Comic Con 2020, be sure to check out all the biggest news and trailers from NYCC 2020, and stay tuned to IGN for continuing coverage.

The New York Film Festival went virtual in 2020, but still served up some of the year’s best films

Sun Oct 11 , 2020
I’ve been attending the New York Film Festival since I was a teenager. The event, held each year at Lincoln Center, is where I had my first encounters with such classics as “Breaking the Waves,” “Gods and Monsters,” “Volver” and — just last year — Martin Scorsese’s magnificent gangster epic […] 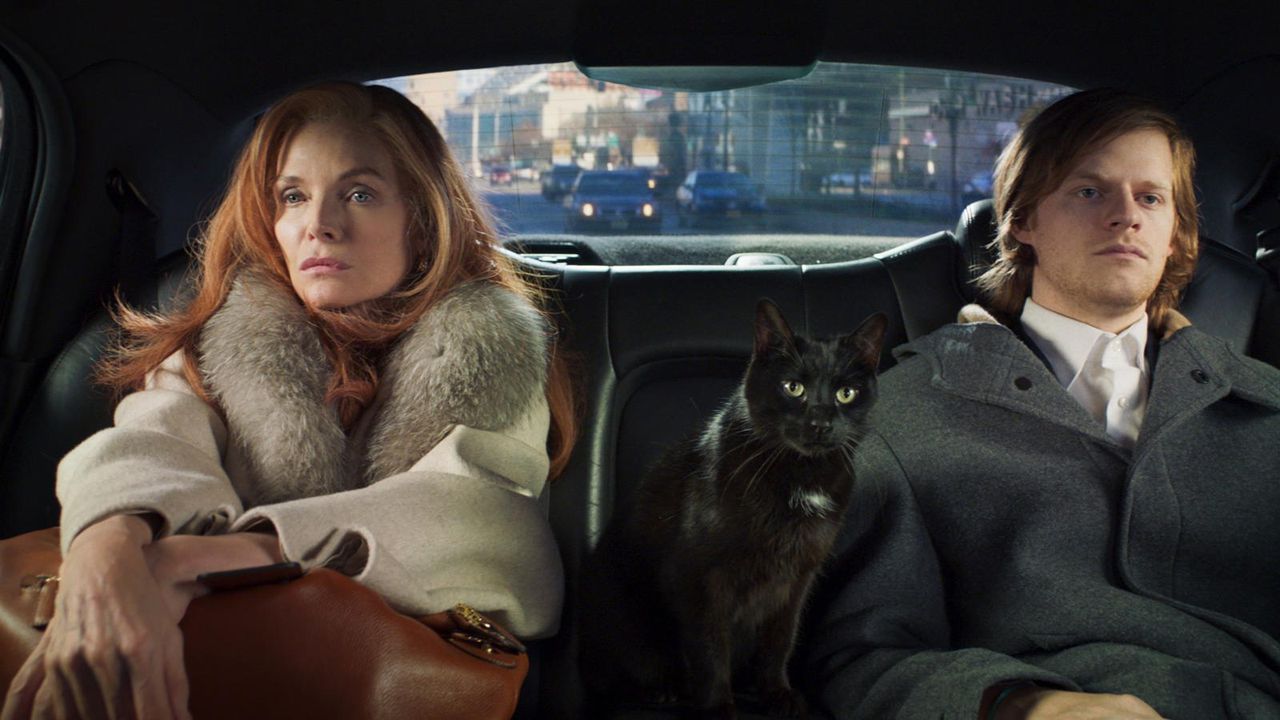