Out on Wall Street, where has focus landed? Squarely on growth. Specifically, investors want to know just how high stocks can climb. Plummeting to a low point in March, the market has bounced back incredibly, with the S&P 500 up 50% since then.

Given this remarkable rebound, is there more fuel left in the tank? Or has the market surged enough for now? Analysts tell investors there’s still plenty of room for growth, with a few names positioning themselves for a serious boost to the upside. We aren’t messing around here. These are stocks that have already posted substantial gains since 2020 kicked off, with the growth set to keep on coming beyond the end of the year.

The fact that these tickers have already notched gains doesn’t guarantee more are on the way, but it’s a good indication. Bearing this in mind, we used TipRanks’ database to pinpoint three stocks that have posted impressive year-to-date performances, and stand to rise even more in the year ahead. According to the platform, all three have enough analyst support to earn a “Strong Buy” consensus rating.

Offering one intuitive platform for voice, video meetings, team messaging and collaboration as well as contact center, RingCentral makes it easier for businesses and organizations to get work done. Even though the company has already delivered a strong performance since the start of 2020 (it’s up 59%), several members of the Street believe shares will further appreciate.

Writing for J.P. Morgan, five-star analyst Sterling Auty is even more optimistic after RNG’s Q2 earnings release. The company reported a solid beat on both the top and bottom-lines, with revenue and non-GAAP EPS coming in at $278 million and $0.24, respectively, compared to the $263.8 million and $0.20 consensus estimates. That said, the analyst’s key takeaway was its subscription revenue, which landed $12 million above of the Street’s call. As a result, management bumped up its guidance for FY20 revenue by $18.5 million at the midpoint.

Weighing in on RNG’s strong showing, Auty stated, “The subscription revenue beat and raise shows both a high level of demand, as work-from-home/anywhere requirements have companies accelerating plans to shift telephony solutions to the Cloud, and the success of the partnership program including companies like Avaya and AT&T. We believe there is potential for further improvement as the latest Atos partnership program kicks into gear, as 11 countries should launch before the end of 2020.”

Adding to the good news, the company’s move upmarket appears to be paying off, as this quarter saw it ink a record number of seven-figure TCV deals in the enterprise segment, 70% of which were new logos. As for its partnership with tech industry heavyweight Microsoft, Auty argues that it is a major win for RNG.

Expounding on this, Auty reminds investors that RNG recently unveiled a PBX integration with Microsoft Teams, and last week, Microsoft released news that implies it is de-emphasizing its voice product and stepping back from competing with carriers. This puts “RNG in an advantageous position to serve MSFT collaboration customers going forward,” in Auty’s opinion.

It should be noted that small and medium-sized businesses (SMBs) still experienced high churn, with travel and hospitality reflecting the sectors hit hardest by COVID-19. However, Auty points out that although “churn is still not back to historical levels,” these verticals make up less than 10% of RNG’s revenue, and churn has rebounded through Q2.

Summing it all up, Auty commented, “So even though valuation on current estimates may look high, we believe that the exceptionally large market opportunity and competitive positioning still make the RNG stock attractive at these levels.”

To this end, Auty stayed with the bulls, reiterating an Overweight rating. Not to mention he gave the price target a lift, raising it from $256 to $375. This conveys his confidence in RNG’s ability to climb 39% higher in the next twelve months. (To watch Auty’s track record, click here)

In general, other analysts don’t beg to differ. Out of 20 total reviews published in the last three months, 19 analysts rated the stock a Buy while only 1 said Hold. Therefore, RNG is a Strong Buy. The $339.05 average price target implies shares could surge 26% in the coming year. (See RingCentral price targets and analyst ratings on TipRanks)

Next up we have DraftKings, which is a digital sports entertainment and gaming company that provides online daily fantasy sports (DFS), online sports betting (OSB) and iGaming. With the return of major league sports, the analyst community thinks additional growth is in store on top of the 219% year-to-date gain it has already posted.

Four-star analyst Mike Hickey, of Benchmark, cites its “leading brand and market share in DFS, a potentially massive and accelerating addressable market from OSB and iGaming state legalization initiatives and solid financial position,” as the key components of his bullish thesis.

DKNG is the dominant player in the DFS space, and it was one of the early leaders to emerge in OSB and iGaming. According to Hickey, both OSB and iGaming are “nascent markets that have the potential to be multi-billion dollar domestic opportunities.” He also points out that DKNG boasts a “differentiated gaming engine that enhances operating margins and serves as a platform for future offerings, including in-game betting.”

Additionally, the market is expanding at a rapid pace, with sports betting currently legal in 23 states, representing 41% of the population. OSB is legal in 14 states (24% of the population) and OSB is live or operational in 10 states, (15% of the population). Given the legalization efforts in several parts of the U.S., Hickey estimates the online sports betting market could have an $18.6 billion-plus TAM. He added, “We expect legalization efforts to accelerate as cash-strapped state’s look for additional revenue sources to fill budget gaps from the pandemic-induced recession.”

When it comes to the iGaming market, Hickey believes that although legalization has been slower, it could achieve a $17.7 billion-plus TAM in the U.S. “We estimate that four states have legalized iGaming, DKNG is operational in NJ, PA and WV, and we suspect the company is working with regulators to open iGaming in MI. Similar to OSB, we believe legalization could accelerate given the current recession and looming state budget gaps,” the analyst explained.

Should 65% OSB legalization and 30% iGaming legalization be achieved by FY25, Hickey estimates DKNG will generate $3.7 billion in sales and $1.1 billion in adjusted EBITDA by FY30. On top of this, the company’s balance sheet is solid, with its adjusted cash balance landing at roughly $1.3-$1.4 billion. Its estimated monthly cash burn would be around $15-$20 million if professional sports were halted.

With Hickey’s premium target multiple reflecting “the company’s elevated near-term revenue growth opportunity and margin potential,” the deal is sealed. To this end, he rates the stock a Buy and has a $47 price target on it. The implication for investors? Upside potential of 38%. (To watch Hickey’s track record, click here)

Judging by the consensus breakdown, other analysts also like what they’re seeing. 11 Buys and a lone Hold add up to a Strong Buy consensus rating. At $47, the average price target is identical to Hickey’s. (See DraftKings stock analysis on TipRanks)

Moving over to the healthcare sector, we come across Horizon Therapeutics, a company that is building a pipeline of innovative medicines in the primary care and rare disease settings. Already up 110% year-to-date, even more gains could be coming its way, so says Wall Street analysts.

Piper Sandler’s David Amsellem tells clients third party data for Tepezza’s June sales is encouraging, as it demonstrates “a brisk pace of uptake, further reinforcing our view that the product is rapidly emerging as a standard-of-care option in patients with moderately-to-severely active thyroid eye disease (TED).”

Expounding on this, Amsellem stated, “This is also bearing in mind that there is increasing evidence that physicians are using Tepezza in both active and fibrotic (inactive) disease. Results from our recent physician survey of current Tepezza users, along with feedback from our call featuring a leading ocular plastic surgeon, reinforce these views.”

Adding to the good news, HZNP recently discussed longer-term efficacy and safety data for the therapy in TED. After the completion of the 24-week treatment period in the OPTIC study, patients entered into a 48-week, non-treatment follow-up period. Patients that were either non-responders at week 24, or were proptosis responders at week 24 but saw rebound proptosis during the 48-week off-treatment period could then opt into the OPTIC-X study to receive another six months of treatment. It should be noted that of the eight patients who relapsed during the non-treatment period and were retreated, 60% had at least a 2 mm reduction in proptosis after the six months of re-treatment.

What does this mean? A KOL argues that this shows “there is a recurrent component to TED, at least in a subset of patients.” This rebound component demonstrates “real potential for longer treatment durations in select patients, as well as potential for repeat treatment courses in certain patients.”

“For instance, of the five patients who were not proptosis responders in the Phase 3 OPTIC study, two became responders after a second course. In broad strokes, the data and associated KOL discussion hosted by HZNP this morning dovetail with feedback from our recent physician checks that is suggestive of Tepezza treatment paradigms that are not simply limited to the six-month course tested in OPTIC,” Amsellem commented.

As Amsellem thinks the likelihood of “Tepezza emerging as a multi-billion dollar franchise is high,” he remains very much on board. Along with an Overweight rating, the price target is left at $102. Should his thesis play out, a potential twelve-month gain of 34% could be in the cards. (To watch Amsellem’s track record, click here)

Looking at the consensus breakdown, other analysts have also been impressed. Based on 8 Buys and no Holds or Sells, the word on the Street is that HZNP is a Strong Buy. Not to mention the $91.50 average price target implies 20% upside potential. (See Horizon Therapeutics stock analysis on TipRanks)

Disclaimer: The opinions expressed in this article are solely those of the featured analysts. The content is intended to be used for informational purposes only. It is very important to do your own analysis before making any investment.

Sobbing over the back-to-school display in the grocery store? It's the coronavirus blues

Sun Aug 9 , 2020
School supplies. (Laurence Mouton / Getty Images) In the grocery store the other day, I passed through the “back to school” aisle and promptly burst into tears. Not the salty-sweet tears that fill your eyes and hang on your lashes before sending a perfect drop or two down your cheek […] 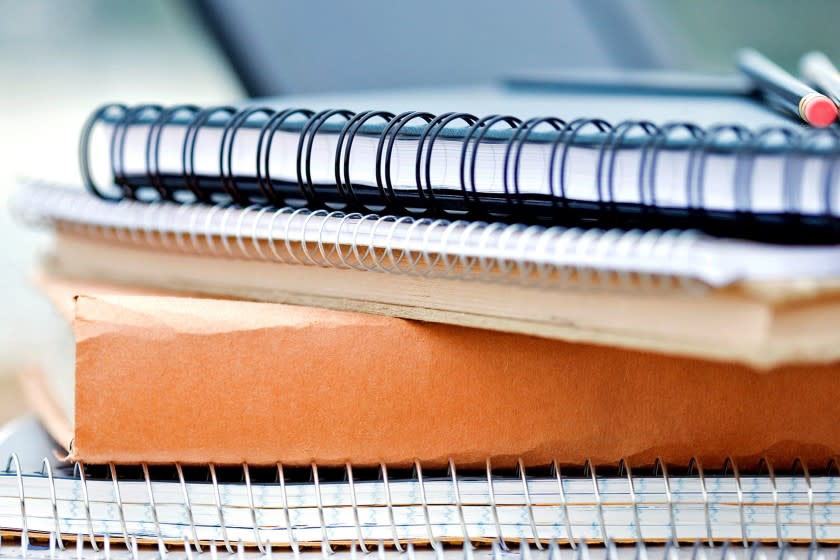