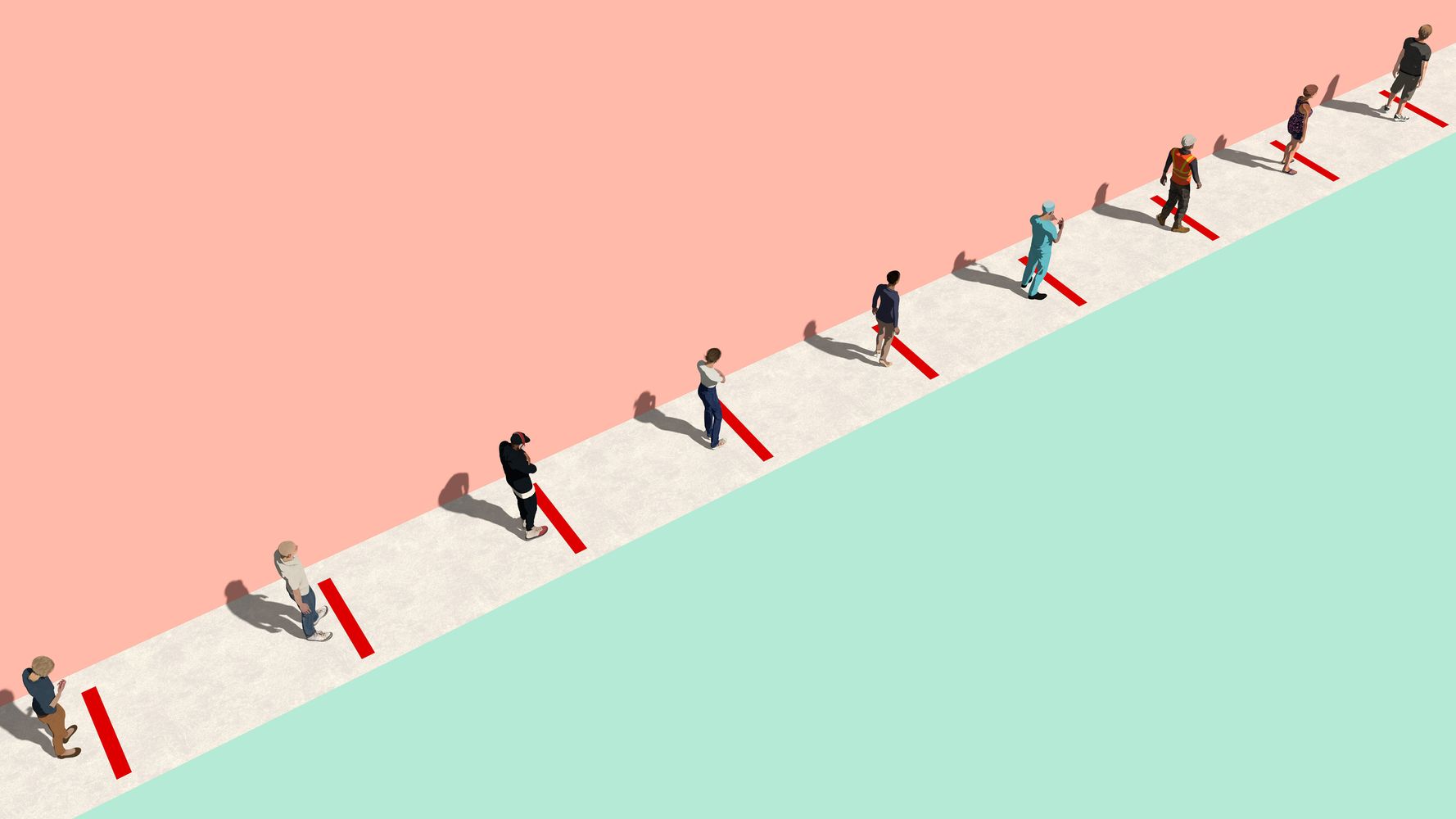 For most of us, the experience of voting in person in the general election ― whether it’s the day of, early, or dropping off your mail-in ballot ― will be as hum-drum and uneventful as usual: You go in, do your thing and move along.

But in some places, including New York and Georgia, early voting has been marked by hours-long waits. Given that you may have to stand in line before getting into your polling place, some voting experts have recommended bringing a snack ― and maybe even a lawn chair to chill.

How can you keep your brain busy if you have to wait? Below, we round up 15 fun, mindless things to do on your phone while queuing up for your civic duty. (If you want to stare at the back of someone’s head, a la Puddy on a plane from “Seinfeld,” hey, it’s a free country.)

The premise of Free Rice is simple: Guess the correct definition for a word and help combat world hunger in the process. But there’s a do-gooding catch: As you play the word game and answer questions correctly, ads appear on your screen. Whenever an ad appears, a donation is made to the United Nations World Food Program.

Just in time for the election, the NYT got voters to pry open their refrigerators so we could all make assumptions about what Trump voters and Biden voters eat. (Mm, delicious, delectable polarization.)

Inevitably, you’ll find yourself looking for trends (one fridge that readers have continued to get wrong is stocked with coconut water; the inclination is to guess it’s a Biden fridge, but nope, it’s a Trump fridge.) One clear takeaway? Regardless of political affiliation, Americans’ milk consumption is through the roof and we could all probably use Marie Kondo to come in and KonMari Method our fridges.

It’s easy to guess who someone with a “MAGA” hat or Biden-Harris tote voted for. But Cool Whip or loose eggs?

We wondered if it was possible to identify Trump and Biden voters based on what’s in their refrigerators.

Take our quiz to see how you do 👇 https://t.co/dfqx7YpjWF

3. If your line is especially long, see if Pizza to the Polls will deliver.

Pizza to the Polls is a non-profit that makes “democracy delicious” by delivering free pies to polling places with long lines. Report a long line on their official site and they’ll send out some food from a local pizzeria.

This year, the site is also teaming with Uber to dispatch 180 food trucks to dozens of cities across the country. They’re handing out everything from Hattie B’s Hot Chicken in Nashville, Tennessee, to Milk Bar snacks everywhere the service is operating.

On the Instagram account @aprettycoolhoteltour and an accompanying YouTube channel, husband and wife Margaret and Corey travel across America and look for weird and wonderful themed hotels and motels to stay at. From a biker-themed room in Salt Lake City to a tacky-glam motel in Pennsylvania that features a giant champagne-shaped tub, the account has a little something for everyone. It’s kitschy Americana at its finest.

OK, OK, this one isn’t exactly fun, but cleaning out your email inbox will make your life more functional. And given how high stakes are in this ― and how exhausting living through a global pandemic is ― your life could use a little less stress.

Made with love and attention to detail by coder Neal Agarwal, “The Deep Sea” lets you scroll down to the very bottom of the ocean floor ― 36,000 feet below! ― and learn facts about sea life and ocean exploration along the way. “Wow,” you might say as you dive deeper and deeper, “That leafy sea dragon is so lucky that it’s never once heard a chant of ‘lock her up!’”

7. Make this worm dance with your browsing finger. (Warning: Flashing images ahead!)

There’s something oddly zen-like about Staggering Beauty, a simple site where you make a worm that, frankly, looks more like a hot dog, dance. That is, until you’re given a command to “shake vigorously” and the page descends into psychedelic flashing light chaos.

8. Reminisce about how awful it is to air travel with other people.

Dreaming of a getaway eight months into the pandemic? Cure your wanderlust with a quick scroll through the pics and videos featured on the Instagram account @passengershaming. (Ew, we’d almost forgotten about the people who put their un-socked feet all over the plane.)

9. See why so many Americans can’t stop playing “Among Us.”

If you hadn’t heard of the super popular game “Among Us” this fall, you definitely did last week after Rep. Alexandria Ocasio-Cortez (D-N.Y.) went viral for livestreaming herself playing with some famous Twitch personalities.

“Among Us” is a multiplayer game where 4-10 players are dropped onto an alien spaceship. Players are designated a role as a “crewmate” or “impostor.” If you’re a crewmate, your goal is to complete a series of tasks on the ship all while trying to suss out ― and avoid being killed by ― a few no-good impostors. It’s pretty much the perfect game to play if you’ve got time to kill. Plus, on mobile, it’s free!

Instagram comedy sensation Jordan Firstman doesn’t do impressions of celebrities. Instead, he’ll do things like an impression of “a best friend character talking to Americans about their shitty boyfriend, America” ― or an impersonation of the publicist of the fly that landed on Mike Pence’s head during the VP debate. (“Girl, girl, America just watched you and loved you. Even the Republicans are laughing.”)

11. Donate food to shelter animals simply by playing a game.

Freekibble is a game website that asks you to answer brief trivia questions about animals. For every answer ― whether you’re right or wrong ― the site donates pet food and supplies to animal shelters. In other words, it’s a very sweet way to waste some time.

12. Watch comedy duo “The Good Liars” troll all the politicians whose faces you’re sick of seeing this year.

This election season, the comedy duo “The Good Liars” have had a number of clever political stunts go viral. They’re the guys who went into book stores and swapped out Donald Trump Jr’s book “Triggered: How the Left Thrives On Hate” with versions with the mocking title, “Daddy, Please Love Me: How Everything I Do Is To Try and Earn My Father’s Love.”

Their Instagram account is full of funny clips of encounters with politicians ― many of which are featured in “The Supporters,” their upcoming movie chronicling the highs and mostly lows of the 2020 election season. The look on Andrew Yang’s face when one of the guys ask if they can get an advance on the universal basic income is golden ― as is their scream-y encounter with legendary screamer Kimberly Guilfoyle. (See below.)

13. Transport yourself to a simpler time by visiting actor Brendan Fraser’s official website.

Miss the early aughts, when times seemed so much simpler and certainly less pandemic-y? Visit Brendan Fraser’s official website, a Flash-heavy treasure that hasn’t changed since 2005.

You may know him as George of the Jungle and Encino Man, but did you also know the actor is an accomplished amateur photog and an absolute wordsmith? Here’s Bren waxing poetic about how he decided to become an actor: “Road tripping his way to graduate school in Texas, Brendan made a brief stopover in Hollywood. In an uncharacteristic moment of introspection, he reconsidered his next move; pondering the eternal verities of education vs. experience, opportunity and vitality and ability and then — gave up on a clear-cut answer and planted his flag instead.”

Research shows that watching footage of animals can make you happier. To that end, check out the Smithsonian’s National Zoo & Conservation Biology Institute’s around-the-clock live feeds to see cheetah cubs, naked mole-rats, lions, elephants or black-footed ferrets. Less into naked mole-rats and more of a puppy person? Watch this livestream of puppies sleeping in a nursery. D’aww.

15. Listen to this The Daily podcast episode that delves into why we’re still using the Electoral College anyway.

At this point in the list ― or in the line ― you’re probably wondering why this election is so neck and neck anyway. Check out this recent episode of The New York Times’ The Daily podcast to learn the history of the Electoral College and what it would take to end it.