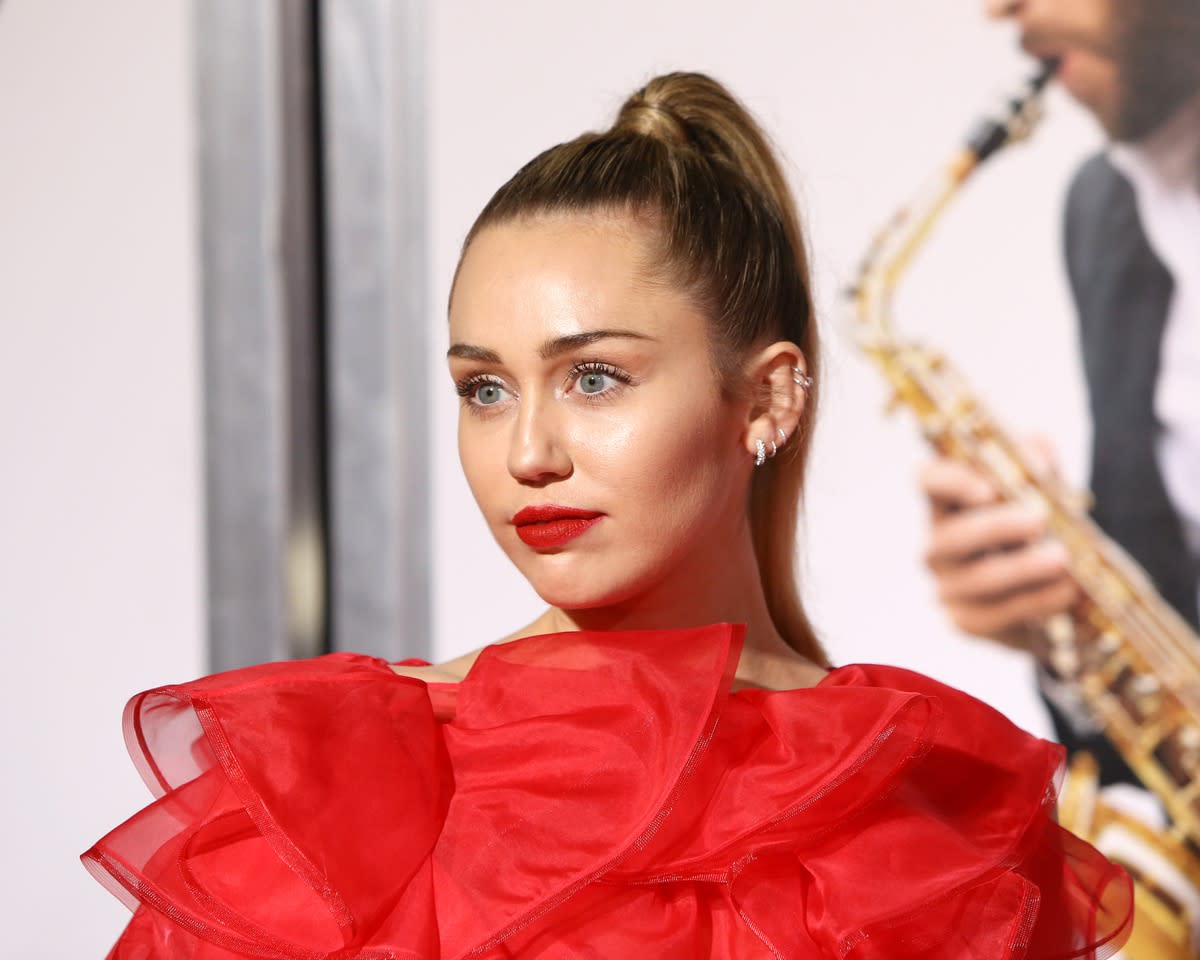 The truth may be out there, but are aliens? According to these A-listers, we may very well not be alone in the universe. Tales of extraterrestrial encounters have been circulating forever, and the stars on this list have their own surprising sci-fi stories to share. Some of these big names aren’t sure of what they saw, while others are convinced it was a visitor from another planet. Whatever you believe, you might be shocked to find out which celebrities have claimed they’ve seen UFOs. And for more stars with spooky pasts, check out these Celebrities You Forgot Were in Horror Movies.

“I had an experience, actually,” Miley Cyrus revealed to Interview magazine on Oct. 19. “I was driving through San Bernardino with my friend, and I got chased down by some sort of UFO.” The pop singer described the UFO as a “flying snowplow”: “It had this big plow in the front of it and was glowing yellow.”

Cyrus said her friend also saw the UFO, and she’s confident about what she saw—though she did admit to also being under the influence of “weed wax.” The biggest reveal in the interview, however, is that Cyrus believes she saw the alien piloting the ship.

“I did see a being sitting in the front of the flying object,” she said. “It looked at me and we made eye contact, and I think that’s what really shook me, looking into the eyes of something that I couldn’t quite wrap my head around.” And for more on the evolution of Miley, take a look at The Biggest Disney Channel Stars, Then and Now.

Demi Lovato doesn’t just claim she’s seen UFOs—she posts photos of them. In an Oct. 17 Instagram post, she shared several images of unidentified flying objects in the night sky above Joshua Tree. “Over the past couple months I have dug deep into the science of consciousness and experienced not only peace and serenity like I’ve never known but I also have witnessed the most incredibly profound sightings both in the sky as well as feet away from me,” she captioned the photos.

The pop singer was in Joshua Tree with Steven Greer, who is “one of the world’s foremost authorities on the subject of UFOs, ET intelligence, and initiating peaceful contact with ET civilizations,” according to his Instagram bio.

In her caption, Lovato continued, “If we were to get 1% of the population to meditate and make contact, we would force our governments to acknowledge the truth about extraterrestrial life among us and change our destructive habits destroying our planet.”

The “Phoenix Lights” spotted in 1997 is one of the best known mass UFO sightings of all time. As it turns out, actor Kurt Russell was the first pilot to report seeing the UFOs, as he revealed during a 2017 BBC interview.

“I was flying [my son Oliver] to go see his girlfriend, and we were on approach,” he said. “I saw six lights over the airport in absolute uniform in a V shape. Oliver said to me—I was just looking at him, I was coming in, we’re maybe a half a mile out—and Oliver said, ‘Pa, what are those lights?'”

Russell admitted he didn’t know what the lights were, then decided to call in and report the sighting. As it turned out, he was only one of many people who spotted the so-called Phoenix Lights that night. And for more surprising trivia, here are 17 Celebrities You Didn’t Know Were Siblings.

In a July interview on the Joe Rogan Experience podcast, Post Malone said that he has seen multiple UFOs throughout his life. The first time was when he was 16 and staying with family in upstate New York. “My aunt and uncle were very strict, and we had to go to bed at a very strict deadline, probably 10 p.m.,” he recalled. “I was looking out the window with my cousin, and it’s just a light that just stays there.”

More recently, Malone claims he has seen UFOs in the skies above Utah and California. Describing what he saw in California, the rapper explained that “it looked kind of like, it sounds corny, but like a classic forcefield. It’s kind of like a dome in a circular shape.” He said the shape stretched out while he was looking at it, and that there were four other witnesses.

The UFOs on the cover of Kesha’s album Rainbows were inspired by her personal experience, as she recounted in a July 2017 appearance on the Zach Sang Show. Like Lovato, Kesha was in Joshua Tree when she had her sightings, and she stressed that she was not on any substances at the time.

“I was on nothing. I was a totally sober Sally, just a lady in the desert,” the singer said. “I look up in the sky and there’s a bunch of spaceships.”

Based on Kesha’s recollection, there were five to seven UFOs. “I don’t know why I didn’t like try to take a picture of it—I just looked at it,” she noted. She said that it was after the lights disappeared and then returned in a different formation that she became certain they were spaceships.

Alicia Keys believes in aliens, she confirmed in a 2013 interview with BuzzFeed. Not only that, but she thinks they already walk among us. When it comes to the subject of UFOs, the singer-songwriter is confident she’s not the only one who has spotted something strange up above.

“I’m sure you’ve seen a UFO,” Keys said. “Haven’t all of us seen something flying in the sky, and it’s at some random time of night that doesn’t make sense, and it’s not the shape of a plane?” And for more deep cuts, check out these Celebrities Whose Real Names You Never Knew.

Do you have chills that are multiplying? Grease star Olivia Newton-John certainly did when she was a teenager and spotted something she believes was a UFO. “I have seen one when I was very young,” she told The Sun in 2009. “It was unidentified and it was flying.”

The actor and singer says the craft was moving at “amazing speed.” And while not everyone might agree that what she saw was a sign of alien life, Newton-John believes many more people have accepted the idea of extraterrestrial visitors. “In England, most people now think UFOs are possible,” the British-Australian star said. “Twenty years ago, how many people would have thought that?” And for more on Newton John’s time to shine, read up on The Biggest Female Icon Every Year Since You Were Born.

Pop singer Nick Jonas has been talking about his UFO sighting for years. In a 2015 appearance on the U.K. series This Morning, Jonas revealed that eight years prior, “I was in my backyard in L.A. I looked up in the sky and there was three flying saucers.”

And Jonas wasn’t alone in seeing the strange sight. He confirmed with a friend who was with him that there were unidentified objects above, then looked for similar accounts, which he was able to find. “I went online and there were three identical sightings two weeks before,” he continued. “There was me, my friend, and a bunch of people in L.A. that all saw it.” And for more intel on A-listers, here are 26 Celebrities You Didn’t Know Were Scientologists.

Anyone who follows January Jones on Instagram knows the actor can be a bit eccentric, so is it really any surprise that she’s spoken about her own close encounter? In a Jan. 2020 appearance on Jimmy Kimmel Live!, the Mad Men star said that she’d seen a UFO once.

Jones was in her 20s when she saw a light in the sky making erratic movements above an Iowa field. “It was definitely a spaceship,” she told Jimmy Kimmel, before cheekily adding, “Or a shooting star that just couldn’t figure it out.”

There might be more than just a rainbow hangin’ over your head if you’re inclined to believe Kacey Musgraves. In a May 2019 interview, the country pop star told NME, “I always find myself looking up when I’m outside, hoping to catch something. I really have a few times.”

One of the UFOs Musgraves says she saw was in Mexico, where she was staying for a friend’s wedding. “I noticed something hovering above the corner of the hotel,” she said. “In the night sky, it kind of looked like the underbelly of a bird. You couldn’t really see what it was. You know how around the outside edge of a hotel they sometimes have floodlights that point up into the sky? Whatever it was, it was being shined on by those. I was very confused by it, so I said, ‘Y’all, what’s that?’ We all watched it for a minute and then it changed shape into an X-pattern, like a windmill shape. It was so weird!”

The UFO then started glowing, the Golden Hour singer said. Mere days after that, she says she saw “two giant balls of fire” hovering above Nashville, a phenomenon she has not been able to explain. And for more fun content delivered straight to your inbox, sign up for our daily newsletter.

Like Demi Lovato, Russell Crowe wasn’t just content to claim to have seen a UFO—he shared footage. In 2013, the Australian actor posted time-lapse photos of a strange glow in the sky behind his office. He shared the possible UFO on Twitter with the caption, “UFO? Time Lapse Photos Outside RC’s Woolloomooloo Office (THESE ARE REAL!).”

No one seemed especially convinced, with some calling it a publicity stunt at the time. Regardless of his intentions, in the seven years since, no one has proved one way or another that Crowe captured an alien spacecraft—except it’s very likely the photos are actually of a sailboat.