For once, the Donald Trump making headlines isn’t the guy with weird hair who tweets in upper case from the White House toilet. Instead it’s the president’s eldest son and namesake, Donald Trump Jr.

The 42-year-old, known as “Don” and reportedly worth $150m, made waves on Monday with a rabble-rousing speech on the opening night of the Republican National Convention, pronouncing: “This election is church, work and school versus rioting, looting and vandalism.” Hmm. Quite the toss-up, huh?

Mini-Don is increasingly viewed as an, ahem, trump card in his father’s fight for re-election in November. Trump Jr isn’t just a prolific fundraiser for the party but his ultra-conservative stance plays well with Republican heartland voters. As Roger Stone, one of Trump Snr’s former confidants, put it: ”Basically, Trump Jr is the voice of undiluted Trumpism.”

Don Jr is tipped to run for office himself one day. Indeed, documentary-maker Anthony Baxter – director of new film exposé You’ve Been Trumped Too – said this week that he’s potentially “more dangerous than his father”.

“In part, it’s because he’s a product of his family,” said Baxter. “He’s lived a very privileged life and seems completely oblivious to what ordinary people have to go through. I’d be very concerned with the idea of him running as a future president, which I don’t rule out at all. You see what’s happened in American history with George Bush Sr and George W Bush.”

1. He trolls the left

Donald Trump Jr’s most powerful lines on Monday night weren’t backing the President, they were attacks on Democratic nominee Joe Biden. “His radical left-wing policies would stop our economic recovery cold and… crush the working man and woman”. He described Biden as “basically the Loch Ness Monster of the Swamp. For the past half-century, he’s been lurking around down there.”

Last year, Trump Jr published a book, catchily titled Triggered: How the Left Thrives on Hate and Wants to Silence Us. Touted as “the book the leftist elites don’t want you to read”, it was highly critical of political correctness and pushed conspiracy theories. Playing on the idea that it would “trigger” liberals, Trump Jr created a website inviting fans to buy copies that would be delivered automatically to their least favourite liberal.

Reviews were scathing. The Washington Post critic wrote: ”It fails as memoir and as polemic: Its analysis is facile, its hypocrisy relentless, its self-awareness marginal. The writing is wretched, even by the standards of political vanity projects.” Nonetheless it became a bestseller. This year, Trump Jr self-published a follow-up with an equally snappy title – Liberal Privilege: Joe Biden and the Democrats’ Defense of the Indefensible.

Don Jr has echoed his father in blaming the “Chinese Communist Party” for the pandemic that has infected 6m Americans, including his girlfriend Kimberly Guilfoyle.

Last month he was temporarily banned from Twitter for posting a video clip discussing the benefits of anti-malaria drug hydroxychloroquine as a preventative measure against coronavirus, despite medical studies indicating the contrary.

Twitter said the post had violated its Covid-19 misinformation rules but Andy Surabian, a spokesman for Donald Trump Jr, said the decision had been “beyond the pale” and “further proof that big tech is intent on killing free expression online, committing election interference to stifle Republican voices”. Crikey.

3. …And a conspiracy theorist generally

In 2018, Don Jr retweeted a conspiracy theory about businessman George Soros being a Nazi and liked a tweet that said migrant children separated from their parents by Trump’s administration had been “coached” by liberals.

He has falsely insinuated that Joe Biden is a paedophile, propagated seemingly unfounded fears of voter fraud and accused CNN of “lying to try to make [his father] look bad”.

Don Jr spent childhood summer holidays in Czechoslovakia with his grandparents. He learned his outdoor skills from his maternal grandfather Zelnicek, who sent him out alone, telling him: “There is the woods. See you at dark.” Don Jr remains an enthusiastic hunter and this rural pursuit – a stark contrast to the more urban personas of his sister and father – has been harnessed by the campaign as a way to connect with many Americans.

However, his love of hunting also caused controversy – notably when pictures surfaced of him and brother Eric posing with a dead leopard, and another where he was holding a knife in one hand and a severed elephant tail in the other. They were kills from an African safari but Don Jr was unmoved by the online backlash, defiantly saying: “I’m not going to run and hide because the PETA crazies don’t like me.”

Only last year, he took a hunting trip to Mongolia that reportedly cost US taxpayers more than $75,000 (£59,000) and saw him shoot a rare Argali mountain sheep – only securing permission from the Mongolian government afterwards. “For trophy hunters to travel to Mongolia to kill a beautiful and endangered ram is an absolute outrage,” said wildlife campaigners. “I’m a hunter,” retorted Don Jr. “For that I make no apologies.”

Donald Trump Jr might not have nearly as many Twitter followers as his father – who has 85.5m to his relatively modest 5.4m – but he similarly uses the social media platform as a political tool.

In 2016, Don Jr got flak for tweeting a meme that compared Syrian refugees to Skittles. Last year, he retweeted (and then deleted) a post claiming Kamala Harris is not “American black” but comes from “Jamaican Slave Owners”. “Donald Trump Jr is a racist too. Shocker,” replied Bernie Sanders.

The Los Angeles Times described him as a “virtual attack dog” after he blasted former FBI Director James Comey in June 2017, firing off more than 80 tweets during Comey’s live testimony before a congressional committee.

6. He has pesky links with Russia

Trump Jr became a central figure in the Russia election-meddling controversy after 2017 reports that he’d taken a meeting with a Russian lawyer who told him she had damaging information about his father’s presidential opponent, Hillary Clinton. Instead of calling the FBI in response, he replied: ”I love it.”

Their meeting was scrutinised by special counsel Robert Mueller during his investigation but Mueller eventually concluded that there was insufficient evidence of a criminal conspiracy. Still, Don Jr has never quite shaken it off. His willingness to meet with a Kremlin-connected fixer was called “criminally stupid” by the New York Post.

His connections with Russian go back more than a decade. In a 2008 interview, he admitted he’d made half a dozen trips there looking for business but was wary of the country’s corruption, saying: “It really is a scary place.”

7. His romantic life has been complicated

Chip-off-the-old-block Don Jr has a penchant for models. In 2003, his father introduced him to Vanessa Kay Haydon, a model who once dated Leonardo DiCaprio. The couple married two years later at his father’s Mar-a-Lago estate. They went on to have five children but in 2018, it was announced that the couple had separated and divorced.

After the news broke, rumours swirled that his Twitter use was a determining factor (sound familiar?) and that he’d also cheated on his wife with singer Aubrey O’Day in 2011 when she was a contestant on The Celebrity Apprentice – on which he acted as “boardroom advisor” to his firing-happy father.

Trump Jr soon started dating attorney and former Fox News anchor Kimberly Guilfoyle, who has since become a senior fundraiser and speech-maker for the Trump campaign. She’s also the ex-wife of California governor Gavin Newsom – a Democrat who Trump Jr criticised for his immigration policy in his book Triggered.

8. He courts the gun lobby

Perhaps unsurprisingly for a committed hunter, Trump Jr has made a robust defence of gun rights – supporting, for example, the weapons industry’s efforts to have restrictions on silencers eased.

He was also reported to have urged his father to back off from any type of meaningful gun control legislation in the wake of last year’s wave of mass shootings, putting Don Jr at odds with his sister Ivanka.

Last month, he appeared in promotional material for gun manufacturer Desert Tech, firing the company’s sniper rifles. Earlier this year, he posted a grinning Instagram photo of himself holding an AR-15 rifle with a cartoon of Hillary Clinton behind bars painted on its magazine. “Nice day at the range,” said the ominous caption.

9. He’s benefited from his father’s power

Rather like his father portrays himself as self-made, despite being a third-generation businessman with inherited wealth, Don Jr seems blissfully unaware of his own privilege. Amid the Ukraine scandal, he strongly criticised Joe Biden’s son Hunter, accusing him of leveraging his father for financial benefit. “When you’re the father and your son’s entire career is dependent on that, they own you,” he said.

He was widely ridiculed for the remarks, with the Associated Press writing that he “showed no self-awareness that he, too, has at least in part been successful because of a famous father”.

Sure, Don Jr’s hairdo isn’t as strange as father’s flyaway yellow combover but he too has, shall we say, idiosyncratic locks. His heavily Brylcreemed, swept-back style resembles an otter’s pelt.

Meanwhile, Don Jr’s recent growth of a beard has been seen both as an image-conscious bid to appeal to younger voters and distinguish himself from his fairer, clean-shaven relatives – and less flatteringly, as an attempt to accentuate a weak jawline.

There’s also the matter of his hands. Rather like Donald Sr has been accused of having tiny, flapping hands, Don Jr’s jerky hand gestures have also been noted by his critics. He throws them around as he talks, resembling a sort of erratic Pinocchio puppet. Body language experts are already having a field day with this week’s speech. Poppa will be proud.

Tue Aug 25 , 2020
8 brands you didn’t know Walmart owned — Recommendations are independently chosen by Reviewed’s editors. Purchases you make through our links may earn us a commission. Walmart owns over 11,000 stores and is one of the biggest retailers in the world. Thinking about Walmart as a single chain is almost […] 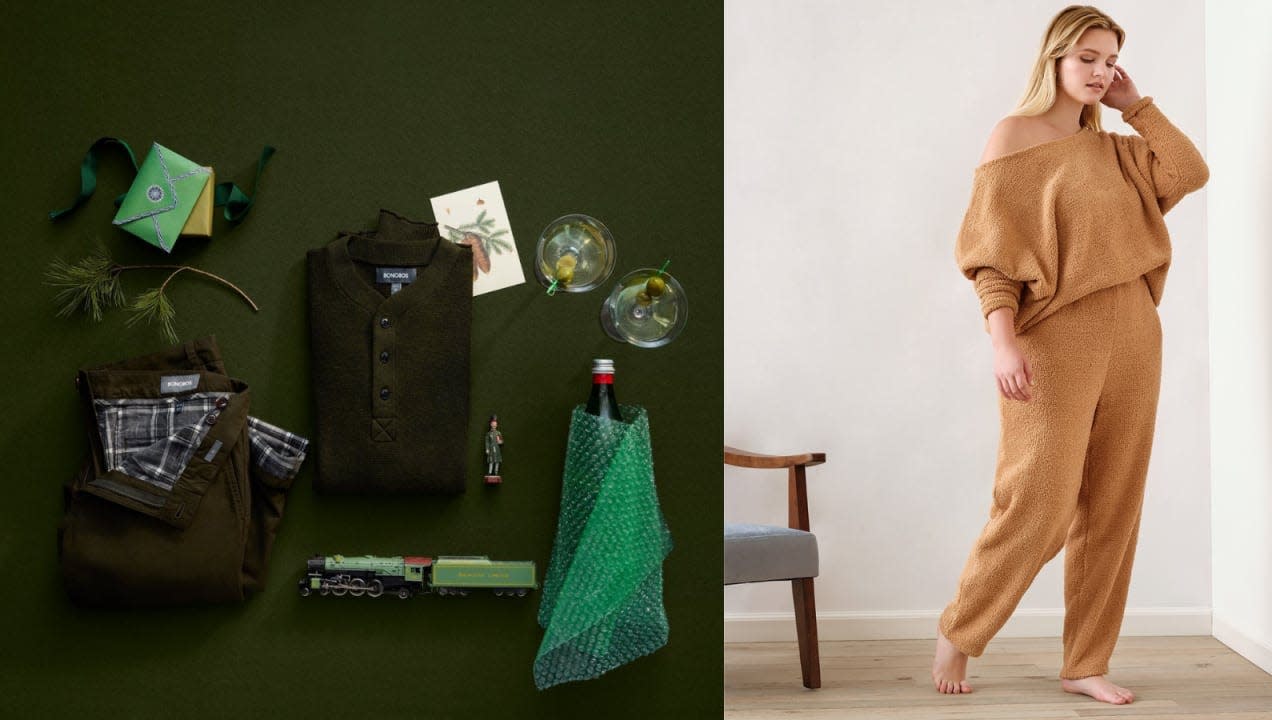